NOTE: Full spoilers for this episode of, “Harley Quinn”, including multiple major character deaths, are present in this review

Harley Quinn left its viewers on a pretty intense cliffhanger last week, after Scarecrow successfully mutates the trees in Gotham City, causing them to devour its citizens. “Devil’s Snare” picks up immediately after the success of Scarecrow’s plan, with Ivy helpless to control the plants, and even Batman and the Justice League struggling to mop up the mess. Another big betrayal on Harley’s end further complicates matters for Harley’s crew to boot, as all of Gotham City is suddenly at the mercy of the Legion of Doom, with no heroes seemingly capable of standing in their way.

It’s impressive that Harley Quinn was able to maintain some focus on solid jokes throughout this penultimate episode for its debut season, considering the violence going on around Gotham City. That said, this episode was still mostly centered around action, presenting a breathless pace that sees Harley’s crew rapidly dumped between one disaster after another, all while the villains make short work of the DC Universe’s biggest heroes. Batman is quickly kept busy by Scarecrow, who naturally did survive his plunge into the Gotham River, while Commissioner Gordon tries to resist the urge to unleash heavy artillery, and cause even more damage to the city. Even the Justice League showing up to help ends up being moot as well, with Superman, Wonder Woman, The Flash and Green Lantern all quickly imprisoned within a story book, courtesy of the Queen of Fables. 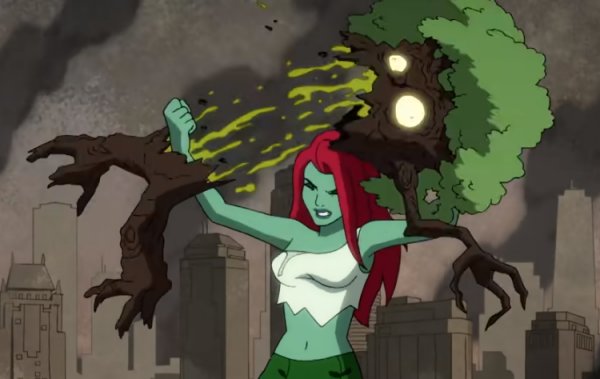 Yes, the Queen of Fables is back again. Turns out that Harley saving her life didn’t amount to much in the end, since Fables sends Harley’s crew up into the clouds via a beanstalk, in order to feed them to a giant. This actually provided a good excuse to bring Kite Man in on the action, while providing a funny scenario through which Ivy confesses that she’s dating Kite Man to Harley, who has to learn the truth while the two are avoiding the giant, and the rest of Harley’s crew admits that they knew about Ivy’s secret affair all along. Fortunately, after some careful wielding of hot sauce (because of course), Kite Man brings everyone back down to terra firma, with some help from Clayface, as the rampaging trees continue to run amok.

Once Harley finally wrestles a tank away from Gordon and his cop cronies however, and takes aim at the Legion of Doom headquarters, she’s surprised to see it blown up by another source! Turns out, in another great payoff to what seemed like a throwaway joke several episodes ago, Joker actually did build his subterranean tower, and uses it to take the place of the Legion’s headquarters, declaring that he has now conquered Gotham City. Apparently, Joker and Fables somehow used Scarecrow’s plot to take over Gotham together, which raises some big questions, on top of disappointingly deflating Scarecrow as a big bad for the season. Joker somehow being behind everything does indeed feel rather predictable most of all, and the idea that he would team up with Fables for his grand plan seems a little out-of-character, considering how much of a massive egotist the Joker is, especially in the Harley Quinn universe. 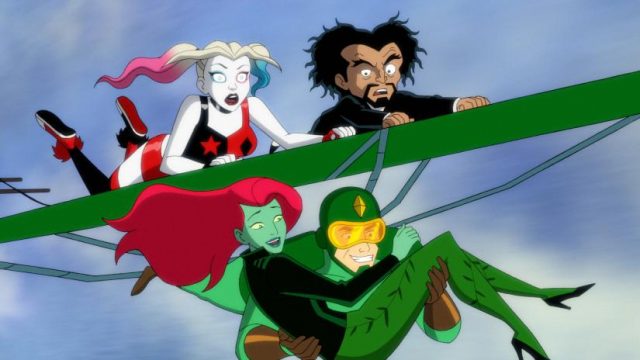 Regardless, the action stays strong in this episode’s climax, with Ivy growing large and fighting off the trees, after ducking a response from Kite Man’s marriage proposal. This moment was both cute and effectively awkward, and it led nicely into Ivy killing trees in order to save her friends, particularly Harley, who almost dies before Ivy intervenes at one point. Despite Ivy and Harley finally reconciling however, this sweet moment ends up being painfully short-lived, as Joker fires a giant flagpole through Ivy’s chest! This made for a much more shocking and effective twist than Harley simply killing Fables by knocking her head off with a bat, which, even by the standards of this cartoon universe, feels a little bit absurd. Regardless, Ivy quickly succumbs to her wounds, leaving both Harley and Kite Man emotionally distraught in the final seconds of the episode, all while Joker cackles in the background.

The decision to kill Ivy off is pretty damn bold, especially for the first season of Harley Quinn, even though it’s very possible that this death could eventually be reversed. Still, this leaves Harley and her crew in the perfect position to take on Joker while they’re extra angry and grief-stricken, especially with the Justice League now incapacitated, and Batman seemingly being kept busy by Scarecrow somewhere else. “Devil’s Snare” ultimately couldn’t resist the low-hanging fruit of making Joker the ultimate threat for Harley Quinn’s debut season, especially after Fables was dispatched far too easily, though the shocking death of Ivy helped to balance this out nicely, especially so soon after Harley’s reconciliation with her, and Kite Man’s dim-witted proposal to her. The rest of this episode also managed to provide a strong mix between engaging action and amusing humour, as Harley’s crew predictably becomes the best means of saving Gotham City in the end. The stage is thus set for what’s sure to be an eventful first season finale for Harley Quinn next week, as what remains of Gotham City is forced to place their trust in the plucky anti-hero that no one believed in, at least until she made the world’s most impractical highway.