Batwoman is coming off of a long overdue highlight episode from the previous week, one that saw Kate torn between two separate incarnations of her lost sister, before ultimately losing one to unforeseen tragedy. This leaves the show outright admitting that it’s been too serious lately (though in last week’s case, that turned out to be a very good thing), and thus, Batwoman delivers another more digestible villain-of-the-week storyline this week with, “Drink Me”, albeit one that doesn’t completely sacrifice the heightened momentum from last week. That said, the villain-of-the-week is still lame, so Batwoman hasn’t completely avoided sinking back into old issues this week.

Our latest disposable foe is Nocturna, a highly skilled burglar character from DC Comics lore, who is more recently portrayed as a vampire in the printed panels. In the case of the Arrowverse, Nocturna once again has vampiric tendencies as well, being a serial killer who leaves victims sedated, and drained of their blood. This leaves Nocturna’s case shooting to the top of Luke’s suggested priority list, believing that Kate could use the distraction. At the same time, the Crows also mobilize to try and take back their authority over Gotham once again, creating some surprising doubts within Sophie, after her alliance with Batwoman ends up testing Sophie’s own loyalty on the job. 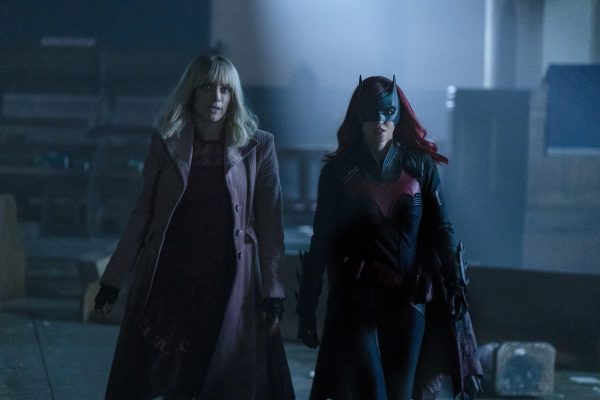 Sophie actually has one of her best storylines in a while in this episode, one that continues building off of Sophie’s better character direction from the previous week. As it turns out, there are consequences to Sophie’s Alice-targeting rampage, and now that Gotham believes Alice is dead, Jacob has been exonerated of the crimes he was accused of. This puts Jacob back in charge of the Crows, where he quickly receives surveillance footage of Sophie helping Batwoman, after Batwoman is initially captured and almost killed by Nocturna. Jacob thus demands Sophie’s loyalty, or her job will be in jeopardy. Considering how much Sophie channels her identity through her work, this is a very compelling conflict, one that could see Sophie putting everything on the line for Batwoman, and ironically rectifying the supposed mistakes of her past.

Even Mary had a pretty decent storyline this week, whereupon she pokes around at the grand opening of Kate’s club, the Hold Up. This, along with Kate asking Mary to check her blood after initially being dosed with Nocturna’s tooth-transmitted sedative, helps to set up a big revelation for Mary, as she inadvertently becomes tangled in Batwoman’s latest villain battle. Kate and Luke working together to try and identify Nocturna by using Kate’s own club as bait is pretty interesting too, especially when Alice also comes snooping around outside. Alice being completely undetected while she stands in plain sight, even at night, is a pretty huge stretch, and it does make one wonder how the Crows haven’t noticed that the wrong Beth Kane is dead, but for now, we at least get another solid storyline from the Kate/Alice interactions here.

This is another way that this episode plays exceptionally off of last week’s momentum, namely when Kate ultimately chose the Beth Kane from Earth-99 to save, and initially left Alice to die in Mary’s clinic. After Cartwright inadvertently killed Earth-99’s Beth however, Alice snapped awake, with a fresh hatred for her sister. This results in a series of complex and challenging interactions between a spurned Alice, and an increasingly hardened Kate, as they find themselves more at odds than ever. Even then though, Alice offers to give her own blood to Mary when Mary ends up attacked by Nocturna, after Alice herself tips Nocturna off to the Desert Rose sample in Mary’s blood. That’s going to keep being a plot point for a while, isn’t it? Well, it appeared like it would at least. According to Mary, she looked at her own blood sample, and saw nothing significant. Still, considering that Earth-99’s Beth had her lifespan slightly extended by Mary’s blood, one has to wonder if Mary missed something.

When all is said and done however, this episode can only go so far when it once again has a lame, disposable and cheesy villain-of-the-week. Sure, Nocturna may be a recurring foe of Batwoman in DC Comics lore, but Nocturna’s Arrowverse incarnation is pretty unimpressive, having shallow, unrealistic motivations, and simply being evil for the sake of being evil for the most part. Sure, Nocturna makes some half-assed speech about people polluting their blood, but the belief that this would drive a formerly innocent young woman to outright murder after losing her caretaker is pretty ridiculous, even for Arrowverse standards. Regardless, Kate manages to subdue Nocturna, and get her sent off to Arkham Asylum, following a brief struggle in a bell tower (which feels like a loose homage to 1989’s Batman movie by Tim Burton), and later gets to share a passionate kiss with Sophie in her Batwoman guise. All’s well that ends well?

Finally, Alice also manages to deduce that Cartwright has taken Mouse, presenting another interesting conflict among the show’s major villains, hopefully giving Alice lots to do over the next several weeks. Batwoman still has a minor villain problem for sure, with Nocturna being the latest villain-of-the-week to feel like a poor Arrowverse translation of her DC Comics inspiration, but at least the character conflicts with Kate, Alice and Sophie worked very well this week. Mary using various clues from throughout the episode to piece together Kate’s secret identity is also pretty good, even if it does spawn from Kate being pretty bad at hiding her secret identity at the best of times. The show may not be hitting the same awesome high point as last week, but it also isn’t sinking back into tiresome mediocrity here, and that’s assuring to see. Batwoman is nonetheless taking next week off, but I’m hoping that the show focuses in on the better character drama that it’s recently managed to find, without getting too hung up on silly distractions like its lacklustre B-list rogues gallery.

Batwoman 1.13: "Drink Me" Review
Batwoman manages to sustain a decent amount of its renewed narrative momentum this week, despite being dragged down by another lame villain-of-the-week.
THE GOOD STUFF
THE NOT-SO-GOOD STUFF
2020-02-24
77%Overall Score
Reader Rating: (0 Votes)
0%