Black Lightning finally kicks off the decisive battle for Freeland, between its titular superhero’s crew, the fledgling Outsiders, and Bill Henderson’s resistance (oh yeah, remember them?), and Markovia and the ASA. Immediately, this feels like a rather large lump of factions to all be suddenly clashing against each other in this week’s season finale, and sure enough, “The Book of War: Chapter Three: Liberation” ends up being a disappointingly clumsy, albeit action-heavy conclusion to Black Lightning’s third season. There’s plenty of intense battling here for sure, which at least helps to make up for a season that’s sometimes been a bit wanting for it, but action alone can’t disguise the fact that this over-stuffed, convoluted season of Black Lightning was inevitably going to come to a less than satisfying finish.

Despite the high-powered duel between Jefferson and Gravedigger that founded last week’s cliffhanger conclusion, this battle turns out to be a mere distraction, with the Markovians simply snatching Jennifer while Jefferson is busy fighting his great uncle. Naturally, Gravedigger doesn’t believe Jefferson’s claims that the two are blood relatives either, but regardless, after their initial battle ends, Jefferson’s priorities are nonetheless focused around trying to get the other metahumans in Freeland to safety. This is also done with the help of Grayle, Grace and Thunder, while Gambi prepares to fight off the Markovians on his own turf, alongside TC. 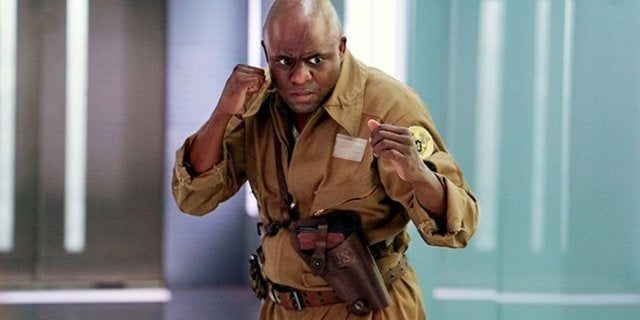 A whole lot happens from here during this rather busy season finale, and it’s going to be very tough to sum it all up succinctly. One thing I will say in this episode’s favour though is that it will at least effortlessly hold your attention, as all of Freeland suddenly goes to hell in a handbasket, with both Markovia and the ASA doing equal amounts of damage, and leaving a huge trail of bodies from all sides around the city. There are some decent displays of solidarity among the lead characters during this fighting however, particularly when Lala assists Henderson’s resistance, even if it’s at the behest of a wounded Lady Eve, who just barely survives a tense briefcase trade with Major Grey. That being said, that’s about the only emotional impact that you’ll get from the otherwise mindless fighting for Freeland during much of this season finale.

At least the fighting is not without proper stakes though, which Black Lightning formerly seemed to be toning down after joining the Arrowverse especially. This season finale actually racks up a huge body count, as if the show is aware that there are far too many characters in the current ensemble, and it very much needs to thin the cast before next season. After Odell orders the ASA to pull out of Freeland and clean up for example, both Commander Williams and Major Grey end up seemingly being killed by Lynn and Gambi, respectively, though not before Williams manages to shoot Dr. Jace dead in turn. This all precedes a major battle at The Pit as well, wherein Gravedigger comes for the isolated metahumans, while Anissa, Grace, Jefferson, Jennifer and Brandon all fight to defend them. 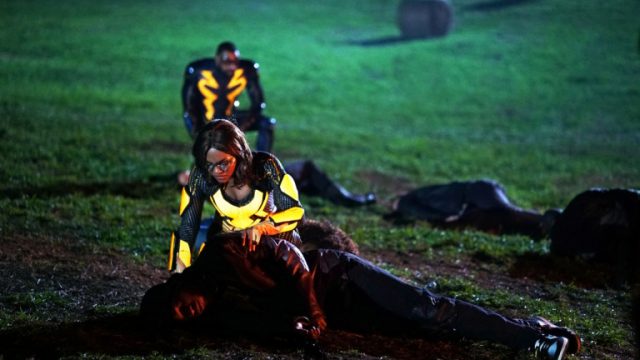 As much as some of the previous character stakes are valid however, this climactic battle for the metahumans of Freeland also works to mixed effect. Again, the action is really good and engaging throughout this Pit sequence, but there’s a huge swath of narrative convenience that sometimes hurts the season’s final resolutions around this point. Even Henderson dying shortly before Jefferson faces Gravedigger at The Pit doesn’t hit with all the impact it could have (especially since Black Lightning fans likely already knew that Damon Gupton was leaving the show before next season), since there’s no time for the fallout to sink in during such a heated battle for Freeland. Grace also ends up being rendered comatose during the Pit fight against Gravedigger, after Gravedigger uses his ‘push’ abilities to force Grace to try and kill Anissa, but this seems like yet another way to bench a character that never really fit that smoothly into this show’s ensemble. Easily the biggest stretch however is when Odell orders an immediate self-destruct for The Pit, and all ASA locations in Freeland, only to have everyone fighting at The Pit miraculously escape and survive, including the unconscious Gravedigger, who disguises himself and is shown very much alive in the epilogue. The comatose Grace somehow gets pulled out as well, due to… I have no idea.

Even Khalil ultimately facing and conquering his Painkiller persona is simply done with a virtual narrative shrug in the end, via an overwrought and pointless action scene that just interrupts the flow of an already messy and scattered season finale. Khalil choosing to non-fatally wound Odell after holding him at gunpoint makes for a bigger character moment, but this debate with Odell also makes the fight against Painkiller feel even more unnecessary. Fortunately though, the government at least disbands the ASA after Odell is successfully arrested, and Markovia does pull out of Freeland in the end, despite Markovia’s leaders refusing to pay reparations to Freeland for their invasion. There’s also a cool epilogue cameo by Black Lightning’s original comic book creators, Trevor Isabella and Tyler Von Eeden, who serve as judges during the congressional debrief in Gotham City (sadly, there’s no Batwoman cameos), which ultimately leads to the formation of an X-Men-esque school for Freeland’s displaced metahumans, now indirectly referred to by Lynn as, “Outsiders.” Like I said in prior reviews, it was pretty obvious that the Outsiders would come to be fully formed by the end of this season, and their establishment in Gotham City is likely a nod to the fact that Batman founded the original DC Comics incarnation of the team in the printed panels. 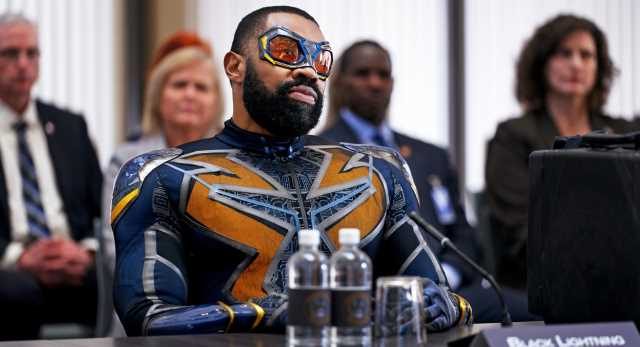 Despite Gravedigger and Tobias Whale being alive and preparing to return another day however (while Lady Eve and Lala both remain at large in Freeland), and despite the formation of the Outsiders’ new private institution in Gotham, this busy, more definitive ending to Season Three of Black Lightning feels like it could have easily doubled as a series finale, with almost every story arc from Season Three being cleanly resolved, many established characters having met their demise, and the ASA being entirely disbanded. It does seem a little evident that the showrunners may have prepared for the possibility that Black Lightning would be cancelled after this season, since it’s seemingly one of the lowest-rated Arrowverse shows at this point, but The CW has already announced the show’s renewal for Season Four, which will hopefully be leaner in scope, and present a more focused narrative. I suppose one could also make the argument that, due to Season Four being the first Black Lightning season that will entirely take place in the same world as The CW’s other ongoing DC dramas, the more definitive resolution of Season Three could also be seen as the end of the ‘old’ era for Black Lightning, and the beginning of a new, revised direction for the show, one that will hopefully leverage more connections to the shared Earth-Prime at large.

For now though, “The Book of War: Chapter Three: Liberation” does what it can to bring the car crash of narrative threads from this past season of Black Lightning to a thrilling and satisfying close, but it definitely achieves the former more than the latter. There are too many quick and easy storytelling resolutions here, despite a heavy dose of action that at least provides a worthy climax to the decisive battle for Freeland. The central conflicts for characters like Khalil, Brandon and TC don’t seem to matter in the end either, though hopefully the new Outsiders camp in Gotham can help to remedy this next season. Even Henderson’s and Jamilah’s deaths feel too quickly glossed over, with Jamilah in particular getting a laughably pathetic death scene that proves not even the show itself cares about her character anymore. At least Jefferson got to make his peace with the dying Henderson before he expired, even if this big moment was virtually forgotten about in the very next scene. Now that the ASA is destroyed, and Markovia has left the country however, hopefully Black Lightning’s conflicts can re-focus around smaller, more street-level drama from here. This is especially important now that Lady Eve and Lala have carved out their own territory in Freeland as well, territory that’s bound to be contested once Tobias finally returns home, only to see that Freeland’s political opponents have been wiped out, leaving more familiar devils in their place.

Black Lightning 3.16: "The Book of War: Chapter Three: Liberation" Review
Black Lightning attempts to wrap up its busy, convoluted third season with a thrilling, but messy season finale this week, as all of the show's factions square off in a decisive battle for Freeland.
THE GOOD STUFF
THE NOT-SO-GOOD STUFF
2020-03-10
70%Overall Score
Reader Rating: (0 Votes)
0%