Better Call Saul had its titular protagonist riding high this week, in something of a throwback to the show’s original tone from Season One. “Namaste” sidelined most of the criminal storylines, with one well-executed exception, and instead focused heavily on Jimmy’s latest string of victories as Saul Goodman. Even Kim can’t ignore Jimmy’s continued success under his new legal moniker, and thus, she’s forced to come to Jimmy with a proposal, after she once again hits a roadblock at Mesa Verde. Meanwhile, Mike continues to struggle with Werner’s death, which takes him to a new and unexpected location.

It seemed inevitable that Kim would eventually have to call on Jimmy to fix her Acker problem, and sure enough, that does finally happen in this episode. Before that however, Jimmy steals several smaller storylines, via a showcase of Jimmy’s case work, beginning with Jimmy talking the idiotic ‘50% off’ junkies into letting him represent them, and later, turning the court system on its ear when he masks his defendant in the audience, to prove a witness is unreliable. It’s this latter showcase that motivates Kim to finally ask Jimmy for help with Acker, after she sits in on a ‘Saul Goodman’ trial, in order to see how Jimmy’s new legal identity is stacking up. Turns out, Jimmy is currently crushing the competition. 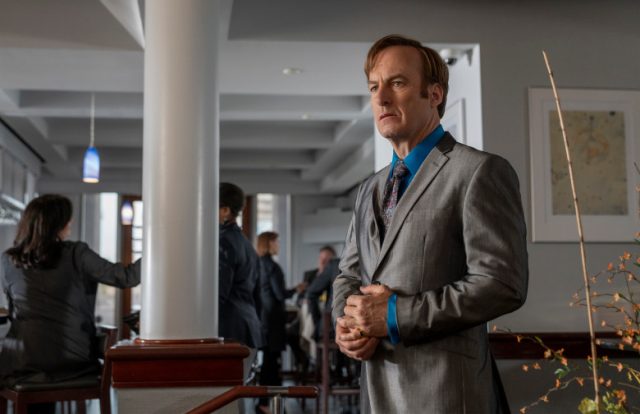 Even Howard hasn’t failed to notice Jimmy’s wave of success either. In one of the best and most shocking storylines of this episode, Jimmy meets Howard for lunch, wherein Howard proposes that Jimmy come and work for HHM. Howard admits to making a mistake passing Jimmy over on two previous occasions, and that he’s now ready to rectify that. Jimmy is cordial at the time of the invitation as well, but the payoff to this storyline is instead an effectively humourous antidote to the rather downbeat conclusion of last week’s episode. This comes via a twist from an otherwise confusing cold open, wherein Jimmy buys several bowling balls from an antique shop. It turns out that these bowling balls are then used to smash Howard’s car window, as well as do some damage to his garden. I’m not quite certain why Jimmy is doing this, but one can only assume that it’s a secret gesture of humiliation. Let’s not forget, Jimmy McGill is the guy who once defecated into a sun roof to stick it to someone!

This tongue-in-cheek comedic tone makes for a welcome throwback for Better Call Saul, especially considering how much the show has languished in misery lately. Speaking of misery, Mike yet again goes in circles here, remaining a frustrating weak spot on this otherwise great, slow burn show. Fortunately, it looks like Mike’s story arc might finally be going somewhere next week however, just in time for the current season of Better Call Saul to hit its halfway point. After Mike is turned down on a babysitting gig for Kaylee, he intentionally provokes the goons he beat up before, only to be stabbed, and wake up in a mysterious location. This finally appears to present some legitimate promise for Mike’s storytelling, which has spent far too long going in circles and re-treading the same tired drama. In fact, when was the last time that Mike had a good team-up with Jimmy? That’s definitely overdue by this point.

In any case, another of the standout storylines of this episode, despite the more light-hearted, Jimmy-centric tone this week, was also the one criminal subplot, as I mentioned. After Hank and Steve try to stake out the dead drops that Krazy-8 tipped them off to before, they have to chase their suspect when he makes them. This is cut between scenes of Fring waiting by a cellphone in his office, while appearing to imply to his devout manager, Lyle that the deep fryer is not being properly cleaned, long after Los Pollos Hermanos has closed. Fring’s neuroses are put under a wonderful microscope here, as are Hank’s more loose cannon methods, which eventually appear to score some money and three arrests for the DEA, despite this all being a part of Fring’s mysterious plans. I’m really looking forward to seeing where the show goes with this subplot, which completely upheld Better Call Saul’s criminal element on its own this week, with considerable aplomb.

Most importantly for the overall narrative though, Jimmy manages to convince Acker to take him on as a lawyer, at the behest of Kim, and thanks to a little help from some, er, creative, “Visual aids.” Truth be told, “Namaste” seemed to inject scenes with Mike, Hank and Fring out of some weird sense of obligation, when this episode could have easily gone all in on Jimmy and his latest legal victories, but at least the Fring/Hank subplot was brilliantly executed, if also a little awkwardly sandwiched into what’s otherwise a very Jimmy-heavy episode. Like I said though, it’s great to see Better Call Saul briefly revisiting its more darkly comedic tone from its first season, which the series seems to have largely moved away from since, in favour of more Breaking Bad-style legal/criminal slow burn drama. This tonal shift is also well-timed with both Jimmy and Kim seeing some tough moments last week, even if Jimmy has since bounced back, and thensome. Most of all though, I’m hoping that Mike’s abrupt change in location will help his storytelling find some much-needed focus. Mike has been heavily shafted throughout this season’s storytelling so far, and it’s about time that he got back on track, and once again started contributing something useful to Better Call Saul’s narrative.