With the Whisperer War having taken a shocking new turn during last week’s episode of The Walking Dead, the series now shifts gears to a bittersweet event that the fans all knew was coming; The exit of Michonne from the series. “What We Become” marks Danai Gurira’s final bow as Michonne on The Walking Dead, a core character that’s now instead being set up to move over to the untitled trilogy of Rick Grimes movies that are in development at AMC, Skybound and Universal. It’s a tough thing to bear witness to, as the series loses yet another long-running, fan-favourite survivor, but if there’s a silver lining to, “What We Become”, it’s that it’s arguably one of the best episodes of Season Ten, if not the best!

Predictably, this Michonne-centric episode completely moves away from the show’s regular communities, who are no doubt currently celebrating the death of Alpha, and the Whisperers now being put on the defensive. This provides an entire extended episode’s worth of time to focus on Michonne taking a trip to the naval base with Virgil, who, as you can imagine, is not exactly up front with his agenda. This presented a wonderful slice of suspense, as Virgil cryptically talks to Michonne about his community and his family, only for Michonne to eventually learn that Virgil’s family is dead, and that he’s dug mysteriously empty graves for them.

Sure enough, Michonne eventually discovers the re-animated corpses of Virgil’s family within a walker-packed barracks, helping to bury them, before being told to keep looking for munitions the next morning. Naturally, Michonne disobeys these directions, and eventually gets locked up by Virgil after skulking around at night, only to hear mysterious voices on the other end of the wall. This is where Michonne’s journey on this show weirdly, but fittingly starts to come full circle. It’s certainly a departure from the show’s usual storytelling methods, beginning when Virgil spikes Michonne’s tea with a hallucinogen found on the island. That sounds weird enough, but what follows is a trek into something resembling a ‘multiverse’ for The Walking Dead, presenting a Michonne that could have been. Well, after she gets tormented by some fresh visions of Siddiq, anyway.

This weird, but compelling drug trip for Michonne is hinted at during the episode’s cold open, which features a brief return by the late Andrea, only now, Michonne allows Andrea to be killed by walkers. This eventually leads to a string of altered events in the show’s canon, with Daryl and the familiar survivors abandoning Michonne on the road, eventually leading to Michonne instead being picked up by Negan and the Saviors. This actually makes an astonishing amount of sense, as Michonne then becomes Negan’s right-hand enforcer, following Laura now instead being the one that’s killed during the initial settlement raid by Rick’s party (poor Laura. This show is always dis-servicing her character), thus resulting in Michonne being the one to kill Abraham and Glenn during the infamous ‘Negan Line’ scene. Of course, the ‘All-Out War’ against the Saviors happens regardless, and Michonne is eventually wounded by Daryl, before being killed by Rick, in this timeline that never was.

The idea is that Michonne’s one simple out-of-character act of helping Andrea at the very end of Season Two changed the course of her entire life, and turned her into the badass anti-hero that she’s now become. This also beautifully came into focus when Michonne eventually manages to get free of confinement, and help the other prisoners, who, as it turns out, were researchers working alongside Virgil. When the researchers want to kill Virgil for his transgressions however, Michonne urges them to have mercy, instead making Virgil take her a nearby aircraft carrier on the water. Once there, Michonne finds something no one could have expected– Rick’s boots! This obviously causes Michonne to lose it on Virgil, but Virgil has no idea who the boots belong to, nor why a cellphone cover appears to show Michonne, alongside the present-era Judith (as confirmed by Japanese kana alongside the image, this is Judith, not Carl).

This excellently sets up Michonne’s post-series future, particularly after Judith gives Michonne her blessing over the walkie to go look for Rick. This also culminates with Michonne eventually rescuing two mysterious, oddly-dressed nomads, who appear to be part of the same mysterious three-ringed community that’s been teased both on this series, with Anne/Jadis supposedly being in cahoots with them, as well as spin-off series, Fear the Walking Dead, where Al encountered one of this community’s soldiers in the episode, “The End of Everything” last season. It would seem then that this massive-scale community, who appears to have been made up for the TV continuity, and doesn’t appear to exist in the Walking Dead comic book continuity, is the key to solving the mystery of Rick’s disappearance, including whether Rick may have been keeping tabs on Michonne and the other survivors from a distance the whole time. Either way, it’s a perfect and fitting end for Michonne’s character on this show, one that allows her to survive, and most likely re-appear alongside Rick in the upcoming trio of Walking Dead movies. 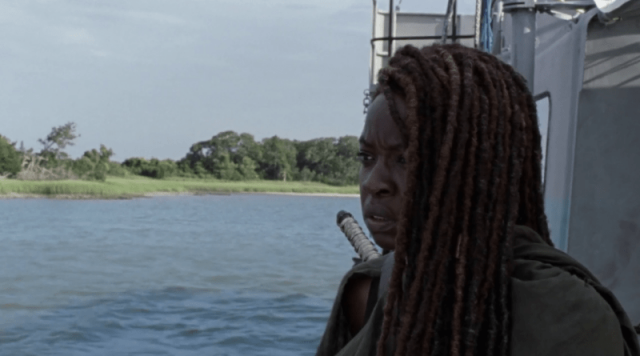 “What We Become” is tough in the sense that it demands we say goodbye (for now) to one of The Walking Dead’s best overall characters, but it does at least close out Michonne’s arc on the series with plenty of promise for future appearances in this universe. It’s very evident that Michonne’s story is not yet done, even if her journey on this show proper has come to an end, and in that respect, the series couldn’t have possibly delivered a better farewell for Michonne’s character. That said, despite the great way that the show brought Michonne’s journey full circle with the weird, but effective look at who Michonne could have been, had she chosen not to save Andrea so many years ago, it was Judith giving Michonne her blessing to leave that really perfected the emotional punch of the episode. Judith has effectively started to succeed both Rick and Michonne as one of the best survivors on The Walking Dead, despite her young age, and Judith allowing her adoptive mother to go is just the latest way that she’s continued to grow as a mature and capable warrior-in-the-making for Alexandria. I’ll miss Michonne a lot, but I know I’ll see her again. Besides, when we inevitably return to the series’ usual communities next week, there’s still a Whisperer War that hasn’t yet been fully won.