NOTE: Some spoilers from throughout the third season of, “Black Lightning” are present in this review

Black Lightning has wrapped up what’s arguably its biggest and most ambitious season to date. On top of a season-long occupation of Freeland by the ASA, a supposed effort to repel an imminent invasion from fictional DC nation, Markovia, Season Three of Black Lightning also finally folded the series into The CW’s shared ‘Arrowverse’, following the events of the Crisis on Infinite Earths crossover. This resulted from the crossover’s fallout ultimately merging the original standalone universe of Black Lightning with the Earth-1 setting of Arrow, The Flash, Legends of Tomorrow and Batwoman, as well as the Earth-38 setting of Supergirl. Despite Black Lightning now finally operating within the same universe as all of The CW’s other ongoing DC dramas however, the series’ storytelling was pretty much entirely unaffected, beyond some throwaway jokes about Jefferson Pierce now sharing a world with formerly fictional superhero icons like the Superman Family and Batwoman.

Indeed, it feels like greater Arrowverse connections on Black Lightning were always something to look forward to next season, rather than this past season. On the one hand, this minimal emphasis on Black Lightning’s new home within the Arrowverse prevents distraction in a season that’s already pretty busy and overstuffed. On the other hand though, this means that the series goes all in on a major story arc that’s spread very thin, and often feels like it overstays its welcome. This is a season that very clearly suffers from ‘Iron Man 2 Syndrome’, in that it’s saddled with trying to establish Black Lightning as part of a larger world, despite the show still refusing to compromise the self-contained character evolution and narrative expansion that it already wanted to explore on its own terms. The thing is, when you try to have it both ways, your focus gets strained, and your storytelling becomes a mess. That latter term is too often a good way to describe Black Lightning’s third season.

The Freeland occupation alone is a large story arc, but it’s also used as a backdoor through which to start establishing DC superhero team, The Outsiders, which only come together towards the final few episodes of the season. Not only that, but the season’s ultimate arch-villain, Tyson Sykes, a.k.a. Gravedigger, played in a standout turn by Wayne Brady, is a great character that feels like he’s introduced too late in the game to fully capitalize on his menacing, yet charismatic appeal. Gravedigger ultimately lives to likely torment the Pierce family again next season, thankfully, but he’s still one of several threats behind Freeland’s occupation that are poorly realized and scattershot, likely due to budget constraints from The CW. This leaves a huge, exciting occupation, and subsequent resistance, to too often be undertaken off-screen, with the rest of the season jumping around haphazardly, spread thin across too much disposable character drama and hurried establishment.

Fortunately, there are still bright spots in Season Three of Black Lightning, usually involving the Pierce family themselves, and that includes Gravedigger, who is eventually revealed to be Jefferson’s age-halted great uncle. Among the Pierce’s, Anissa sometimes gets the short end of the stick, especially when the anti-ASA resistance ends up quickly being pushed into the background during the season’s latter half, but Grace’s character still slightly improved this season, namely because she and Anissa finally cut out their increasingly infuriating romantic drama. Aside from Anissa and Grace, the rest of the Pierce family had more consistently interesting story arcs this season too, whether it was Jennifer having to learn accountability as a fledgling superhero, Lynn’s obsession with helping metahumans eventually spiraling into a dangerous drug addiction, or Jefferson learning to overcome his subjective principles to fully contribute to a conflict that’s bigger than his own concerns. Jefferson’s arc in particular even culminated with the unexpected death of Freeland’s deputy police chief, and Jefferson’s longtime friend, Bill Henderson in the season finale, a rare moment of maintained, grounded consequences during a season that otherwise seemed to move Black Lightning much deeper into comic book territory.

This shift in tone was especially prevalent through the sheer amount of villain resurrections that occurred during Season Three of Black Lightning, starting with yet another revival for Khalil. Khalil’s character is much less appealing in Season Three to boot. Khalil’s resurrection comes after his story arc was pretty satisfyingly resolved upon his death in Season Two, only for the show to drag him back to life yet again, this time as a mind-controlled ASA assassin with a separate ‘Painkiller’ personality. This does at least prime Khalil to eventually join the Outsiders, a ragtag team of rescued ASA metahuman subjects in the case of the Arrowverse, but beyond that, Khalil’s storyline just retreaded the same tired old drama for much of the season. Tobias Whale, meanwhile, spent most of this past season at the mercy of the ASA, supposedly to groom Markovia and Gravedigger as new villains. This definitely would have worked better if Markovia and its own metahuman operation had a larger villain presence during Season Three though, rather than Black Lightning instead leaving the ASA to shoulder the bulk of conflicts in Freeland, with only Agent Odell doing a half-decent job at that as well, thanks to his more effective moral ambiguity and steely demeanour.

Lala also made yet another return to the land of the living in Season Three, essentially succeeding Tobias as the main crime boss on the streets of Freeland during this past season. Lala remains one of the better recurring villains on Black Lightning, but he also suffers from the fact that his criminal storylines mostly function as a tease for a post-occupation takeover, something that never happens in Season Three proper. Lala’s storyline also eventually ties into a shocking answer for who ordered the hit on Gambi last season, with the culprit apparently being Lady Eve, yet another recurring enemy of Black Lightning who has now defied the reaper, having her own death from Season One conveniently reversed off-screen by Lazarus, the same mysterious scientist that also resurrected Lala on more than one occasion. Lady Eve is another returning villain who’s mostly just present to tease the new threat of Season Four to boot, which not only appears to involve Freeland’s street criminals once again being the biggest threat to the city, but also a mysterious organization called the ‘Shadow Board’, which both Lady Eve and Odell apparently have some sort of connection to. 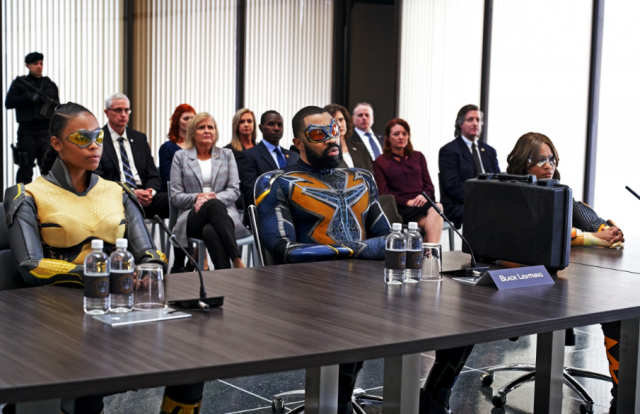 All this is to say that Black Lightning’s upcoming fourth season appears to be offering lots to look forward to, so at least the series isn’t losing storytelling momentum, necessarily. That said, this doesn’t change the fact that the show’s third season is too often unfocused and messy in its execution, leading to a season that realizes too few of its promising ideas, and bites off more than it can chew with its core premise of a season-long Freeland occupation. It’s nonetheless exciting that Black Lightning is now part of the Arrowverse as of Season Three however, with the series finally being able to fully interact with The CW’s other ongoing DC dramas in earnest. Again though, that’s a prospect that one can better look forward to next season, when Black Lightning hopefully focuses its threats and drama better, especially now that the show has mercifully gotten rid of the ASA. There’s still enough decent action and drama for fans to enjoy in Season Three, but this also means slogging through quite a bit of tedium and half-baked conflicts, leaving Black Lightning continuing to struggle when it comes to recapturing that same potent narrative punch that the series so often achieved in Season One.