The interesting thing about this stage of Better Call Saul is that the series’ deepening Breaking Bad connections are starting to deal more frequently in predictable events. Viewers can now see the walls closing in around Jimmy McGill, who seems to sink deeper into his Saul Goodman identity every single week. “JMM” further built upon this growing entrapment of Jimmy’s character, though after last week’s crescendo of especially riveting events, this week’s episode did slow down more, and didn’t provide quite as many soaring highs. Regardless, “JMM” still sets up a key relationship that leads directly into Breaking Bad, while nicely furthering a growing psychological duel between two of Better Call Saul’s lead antagonists.

After Lalo got pinched last week, following Mike’s coaching of a witness, it was inevitable that Jimmy’s services would be called upon by Nacho, who points Jimmy to Lalo’s need for representation. This also happens to follow Jimmy and Kim getting married, with some help from Huell. The two have a quick, easy ceremony at City Hall, with both proudly claiming to Huell that this is simply being done as a legal defense, namely as a means to insulate Kim, and prevent either Jimmy or Kim from having to testify against the other. In a way then, this otherwise romantic turn for Jimmy and Kim merely represents the latest thankless perversion of the justice system for their own ends, and this episode was kind of right to not focus heavily on it. 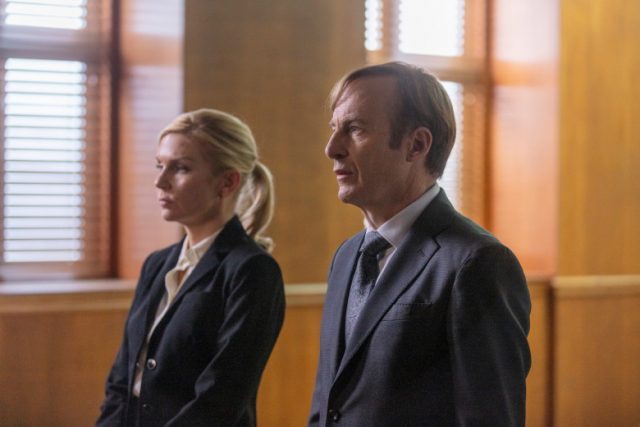 That being said, Kim strangely hit a slow spot this week, and wasn’t given much of interest to do. This could be due to the necessity of bringing Better Call Saul’s criminal storylines more to the forefront, now that the show is connecting Jimmy to Lalo, and beginning its effort to irrevocably force Jimmy into the growing war between the Fring and Salamanca cartels. To Jimmy’s credit though, he does confess to Kim that he’s been contracted to represent Lalo, right down to admitting to who and what exactly Lalo is, as well as what Lalo could represent for Jimmy’s career and pocketbook. Kim, meanwhile, was merely left to call Kevin out on events we already saw, and more or less orbit around Jimmy, without contributing much to the overall storyline. This is frustrating, since Kim’s character is usually one of the best personalities on Better Call Saul, and it seems like she’s hit a bit of a wall for now.

Mike, meanwhile, also didn’t have too much to do this week, though it was nice to see that Mike has now mended his relationship with his daughter-in-law and granddaughter. Mike also got a chance to check in with Nacho, but the real highlight of Mike’s subplot comes when he unexpectedly shows up at Jimmy’s apartment soon after this, finally uniting Mike and Jimmy on their latest bout of ill intent. A key story device in this episode in fact comes from both Lalo and Mike separately demanding that Jimmy get Lalo out on bail, despite Lalo being charged with many counts of violent crimes, including first-degree murder. Jimmy, of course, thinks this is impossible, especially when he’s momentarily forced to face the family that’s having old wounds ripped open by the dueling cartels, only for Saul Goodman’s persona to inevitably take over, and inevitably prevail. 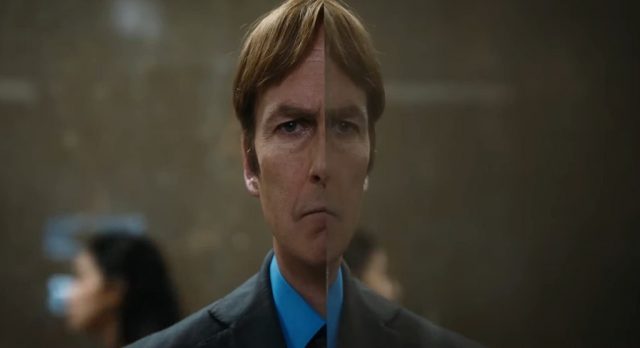 It’s also quite interesting to see how Fring is matching and attempting to evade Lalo’s own moves for the Salamanca cartel. After attending a multi-chain fast food conference for Madrigal (which is both a little ridiculous and undeniably logical), Fring is left to conspire with Lydia and Madrigal CEO, Peter, fresh off of the intel from Nacho that Nacho has been ordered to burn down a Los Pollos Hermanos branch. Fring ends up going along with the arson effort as well, coldly teaming up with Nacho to commit the destructive act against his own restaurant, before nonchalantly driving away. As much as the ground is clearly shrinking beneath Jimmy’s feet, it’s equally interesting to see Nacho also inescapably being pulled into the cartels’ machinations, even when he just wants to escape with his father, an endeavour that seems more or less impossible at this point.

This episode then ends with Jimmy finally burning the bridge with Howard, after Howard admits to Jimmy that he’s aware of Jimmy’s torments, and is no longer interested in offering Jimmy work. Jimmy then blows up, claiming that he doesn’t need Howard, but in reality, we know that Jimmy’s entire harassment of Howard is being done to address the thing that Jimmy is losing most of all right now– Control. Whether by his own hand, or outside forces, Jimmy knows he’s becoming something else, something bad, and at this point, it’s highly unlikely that anyone will be able to stop it. I do wish that, “JMM” had advanced the storyline of Kim in particular a little more though, plus the slowed pacing throughout much of this episode didn’t lead to many more truly shocking turns with anyone this week. Then again, perhaps this week’s slight narrative disappointment is also a side effect from how especially riveting Better Call Saul has been over the past couple of weeks. Sure, there aren’t too many storytelling curveballs in this episode, but if anything, the straightforward plotting still manages to effectively highlight what Jimmy keeps losing, and how, in a short while, he’ll likely no longer recognize himself in the mirror.

Better Call Saul 5.7: "JMM" Review
Better Call Saul loses a bit too much storytelling momentum this week, but it still manages to provide a compelling and tragic portrait of Jimmy's ever-loosening control over his circumstances.
THE GOOD STUFF
THE NOT-SO-GOOD STUFF
2020-03-31
81%Overall Score
Reader Rating: (0 Votes)
0%