NOTE: This review may contain some mild spoilers for the first season of, “Mythic Quest: Raven’s Banquet.” That said, the review is written to accommodate those who haven’t yet watched the season, and as such, will avoid discussion of major plot developments.

The fledgling Apple TV+ streaming platform is certainly not wanting for high-profile drama shows, but at this point, it’s looking rather thin on original comedies. Fortunately, there is one blockbuster comedy series that’s finally leading the charge for Apple’s original series catalogue, and that’s Mythic Quest: Raven’s Banquet, a big co-production between major video game publisher, Ubisoft, Lionsgate Television, and It’s Always Sunny in Philadelphia creative trio, Rob McElhenney, Charlie Day and Megan Ganz. McElhenney also stars in this debuting series, a workplace sitcom set within the walls of a fictional video game development studio in California, who just so happen to be the creators and overseers of the world’s biggest massively-multiplayer online role-playing game, Mythic Quest, essentially a fictional stand-in for real-world MMORPG sensation, World of Warcraft.

It’s the kind of accessible, modern, Millennial-courting sitcom pitch that somewhat boggles the mind when you consider how long it took to make a show like this. McElhenney himself was even allegedly skeptical of the idea at first, though you wouldn’t know it from viewing the final product. McElhenney steals this show and runs with it as the narcissistic, childish and self-absorbed creative director of Mythic Quest, Ian Grimm, pronounced, “Eye-an”, because that’s how far up his own ass this guy is. If The Office’s Michael Scott lived in California, dressed and acted like a bro douche, and headed up a video game studio, he would pretty much be this guy. Funnier still is that Ian is so charismatic and weirdly ingenious in his creations that no one on his payroll seems to catch on to how much of an insufferable man-child he truly is. The only exception to this rule is Mythic Quest’s lead software engineer, Poppy Li, played in another standout role by Charlotte Nicdao, who is often the victim of Ian’s increasingly outlandish ideas and demands. 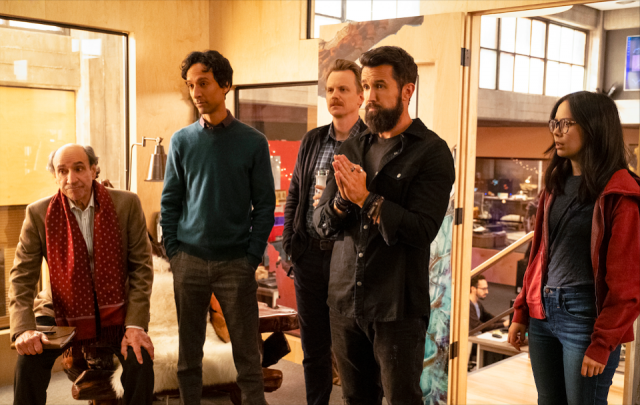 A little bit of Silicon Valley and Brooklyn Nine-Nine are thus also sprinkled into this comedic concoction, and the result is a sharp, funny and surprisingly thoughtful examination and satire of the modern, colossal video game industry. Like I said, it’s amazing that it took this long for a modern sitcom set within a video game studio to materialize. Even Mythic Quest: Raven’s Banquet itself points out, and this is true, that the video game industry’s net worth and consumer base now dwarfs the movie, television and music industries, practically combined! You’d think with all of the money and subsequent controversies flowing through modern video game development that video game-themed sitcoms would be a dime a dozen at this point. That’s why it’s actually pretty smart that Apple is taking advantage of other streamers being strangely asleep at the wheel with this well of comedic, and even dramatic, potential, subsequently delivering what’s easily their most impressive original comedy series so far, and possibly their only fully committed original comedy series so far, if Dickinson and Little America don’t cut the mustard for you.

Mythic Quest: Raven’s Banquet is also noteworthy for ditching Apple TV+’s usual weekly doling out of episodes, and instead simply dropping its entire first season onto the platform all at once. This is a smart move, since the nine episodes that comprise this show’s first season are best consumed all together, especially since Mythic Quest: Raven’s Banquet is still struggling to find its own unique voice in some cases. As funny as the show is, as great as the characters are, and as much as this marks a truly clever showcase of the best and worst behind modern online video games and the people who make them possible, Mythic Quest: Raven’s Banquet does sometimes feel like it’s falling back on the same old workplace comedy storylines, as if it’s still a little bit uneasy about alienating people who aren’t largely familiar with video games or video game development. This makes sense to a degree, but the show needs to overcome this creative apprehension if it wants to stand with the likes of all-time greats in the genre, like Brooklyn Nine-Nine, Parks & Recreation, and of course, The Office. After all, Brooklyn Nine-Nine has found plenty of ways to brilliantly skewer and exploit the law enforcement industry without relying on its viewers being cops, for example. 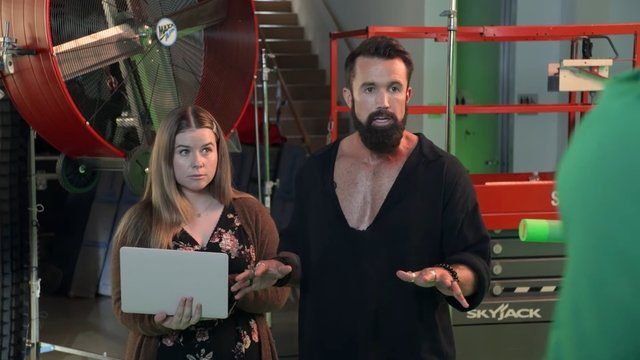 So, aside from ensemble heads, Ian and Poppy, who else is present in the lead cast of Mythic Quest: Raven’s Banquet? Well, there’s David Brittlesby, played by yet another It’s Always Sunny in Philadelphia alum, David Hornsby, the neurotic, comically ineffectual executive producer of Mythic Quest, who no one at all respects. This even includes David’s assistant, Jo, played by Jessie Ennis, a scary, brash and confrontational woman who not only doesn’t do what David says, but also frequently torments the other employees, except of course for Ian, whom she strangely admires. Danny Pudi is also a standout as Mythic Quest’s over-the-top greedy and conniving head of monetization, Brad Bakshi, who is always looking to come up with increasingly shady ways to milk additional money from Mythic Quest’s players, while concocting increasingly elaborate schemes to prove that the other employees can’t get rid of him. F. Murray Abraham also stands out as washed-up, old and oblivious game scenario writer, C.W. Longbottom, who knows nothing about video games, but is nonetheless very much in love with the sound of his own voice and writing theory.

There are a few other personalities in Mythic Quest: Raven’s Banquet’s lead ensemble, such as a pair of will they/won’t they female game testers, Rachel and Dana, played by Ashly Burch and Imani Hakim, respectively, an outwardly sweet, but inwardly unstable community manager, Sue, played by Caitlin McGee, a cynical, prickly lone female programmer named Michelle, played by Aparna Nancheria, and an especially funny HR lady that no one properly grasps the role of, Carol, played by a frustratingly under-utilized Naomi Ekperigin. These secondary characters are mostly used as gag fodder, despite a semi-interesting twist with Dana about midway through the season, but they do lay the foundation for more interesting plots to be explored during this show’s future, particularly since Mythic Quest: Raven’s Banquet has already received a well-deserved early renewal for Season Two. Mythic Quest: Raven’s Banquet thus certainly isn’t starved for personality in its performances and characterization, even if the show’s narrative scenarios could do with pushing the boat out a bit more in terms of storytelling distinction. 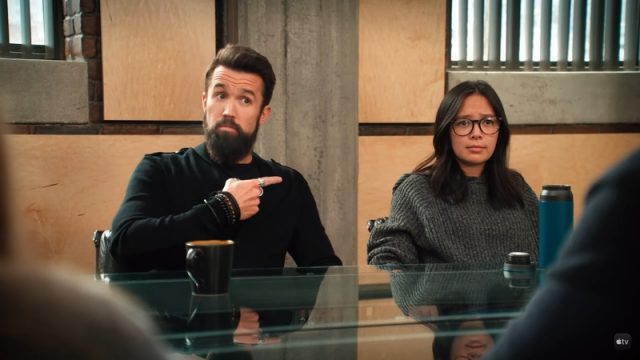 Even while playing a bit defensively in its story writing however, it’s amazing to see how surprisingly sensitive and insightful Mythic Quest: Raven’s Banquet truly is when it comes to issues in video game development, and professional creative expression as a whole. This is especially true when one of the biggest video game corporations in the world co-produces this series! Across its first nine episodes alone, Mythic Quest: Raven’s Banquet tastefully, but boldly takes on issues like over-monetization in video games, video game commercialism ruining artistic integrity, personal relationships deteriorating over sustained video game development, workplace crunch, being mercy to young upstart influencers without a true knowledge or appreciation for video game makers’ toil, the demand for more women to work in video game development, undue harassment of video game community managers and personalities, and even sinking all of one’s energy into creative development as a way of avoiding personal responsibility, among other topics. One of the best episodes of the season even completely breaks away from the show’s main narrative, instead spotlighting the former tenants of the Mythic Quest office space, played by Jake Johnson and Cristin Milioti, whose budding romance and eventual separation beautifully characterize the eternal struggle between the desire to simultaneously grow revenue and customer bases, and protect an artistic vision, two things that can too often be mutually exclusive in the world of triple-A video game development.

Mythic Quest: Raven’s Banquet clearly has a lot to say about video game culture, and entertainment capitalism in general. Its currently-conservative story planning no doubt teases that the show is clearly saving several of its best narrative ideas for future seasons as well. The series isn’t quite as outstanding as it could be yet, but it does nonetheless stand as a great, and much-needed original sitcom for Apple TV+. Gamers, and those acquainted with video game industry practices, will find all sorts of clever, authentic nods to the medium they love and thrive in here, but even if you don’t know the first thing about video games or how they’re made, Mythic Quest: Raven’s Banquet is still a strong workplace comedy series on its own merits. It may not be the next It’s Always Sunny in Philadelphia, but it’s a great start for a subgenre of televised comedy that probably should have started being explored years ago.