Well, colour me shocked! Even after taking over a month off the air, due to ongoing production complications from the COVID-19 pandemic, Batwoman managed to follow a genuinely superb previous episode with another genuinely superb episode for its big return! “A Narrow Escape” continues to have the over-arching mystery behind Gotham City’s Lucius Fox murder conspiracy, and how it relates to the show’s inevitable introduction of the Many Arms of Death, keep coming into focus, now once again bringing the core Batwoman heroes into its orbit, to great effect. Kate in particular has to deal with the huge psychological fallout from her accidental murder of August Cartwright, which results in a temporary, but noticeable absence for her vigilante alter-ego.

If there was one drawback to this otherwise very strong Batwoman episode, it’s the fact that the show didn’t really take enough time to mine drama from Kate’s absence as Batwoman. We do at least see glimpses of other women from Gotham who are disguising themselves as Batwoman in Kate’s place, and even showing up in Mary’s clinic to get treated, not to mention that there are constant references to criminals supposedly being more ruthless and aggressive during the week where Kate hangs up her cape. Since this inevitably doesn’t last however, the fallout from Kate’s quick absence as Batwoman feels circumstantial and mostly un-addressed, and it’s gone just as quickly once this episode wraps up.

That’s really the worst that can be said about another otherwise standout bit of storytelling from Batwoman though, particularly as Kate at least manages to face real personal consequences from killing Cartwright. While this can sometimes be a little hokey, Kate having to carry the guilt of her manslaughter is something that runs through this episode exceptionally, rendering Kate unable to continue taking up her Batwoman mantle until she properly confronts what she’s done. This beautifully comes into focus during the climax of this episode, when a big incident with Luke forces Kate to own up to her actions, for the good of Gotham in general.

These events are kicked off with the return of a supposedly retired serial bomber, aptly called, “The Detonator.” This character does exist in DC Comics lore, as a member of the Seven Men of Death (not to be confused with the Many Arms of Death, an entirely separate organization), but the version portrayed in Batwoman is entirely different from his counterpart in the printed panels. In the case of the Arrowverse, The Detonator is an explosives expert and sociopath that forces the supposed civilian ‘heroes’ of Gotham (doctors, cops, firefighters, etc..) to choose between letting themselves be blown up by a time bomb, or activating a remote bomb that kills several more innocent people, to save their own life. This is actually a really cool and interesting villain-of-the-week scenario, complete with a reasonable red herring, after Kate investigates all of The Detonator’s bombs having a ‘214’ label, a dishonourable discharge designation from the military, only to find that it’s a false lead. Well, somewhat. Kate does identify the original Detonator through this investigation, only to learn that the ‘true’ Detonator died seven years ago, shortly after his original rampage. Apparently, the new Detonator terrorizing Gotham is a copycat. 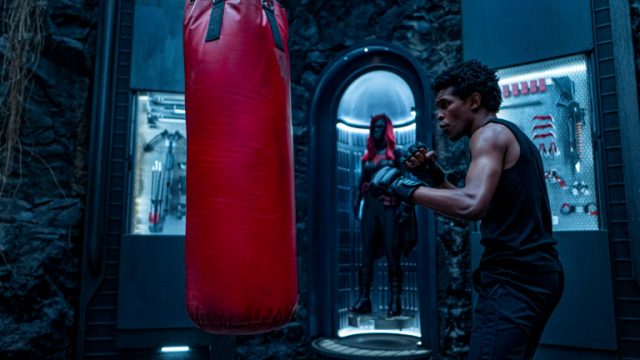 The payoff to this copycat scenario is pretty fantastic as well! The identity of this new Detonator stems all the way back to the Lucius Fox murder, with The Detonator picking up where The Rifle left off, and deliberately targeting buildings and locations where he can detonate bombs, and bury evidence that could lead Batwoman or the Crows closer to the truth. Once Kate identifies the man responsible, a high-ranking Crows member who investigated the original Detonator as a rookie cop, and was first on the scene to Lucius Fox’s killing many years ago, Luke ends up confronting the guy with a gun, after Kate forces him to try and disarm the contingency bomb under Wayne Tower. Further complicating matters is that Jacob is the latest victim that’s in control of the detonation below Wayne Tower, with Sophie and Julia having to stand beside him, and wait for Kate’s command to let Jacob detonate the bomb.

This climax is excellent in pretty much every respect. We see an especially dark turn from Luke here, as he’s ready to shoot through even Batwoman to take revenge for his murdered father! This showcases a very shady new side of Luke that the show has merely hinted at before now, one that gives Kate the perfect excuse to confess to Luke that she killed Cartwright, something she never told him before. This pulls Luke back from the edge, while doubling as a chance for Kate to resolve her guilt, and confront her former actions, for better or for worse. Not only that, but after the traitorous Crow is successfully arrested, Kate soon after learns from Luke, in a not-so-veiled manner, that Batman also broke his rule of never killing criminals in the past, namely when he seemingly became involved in the Joker’s death, thus explaining why Joker has not resurfaced in Gotham for five years. Whether Batman killed Joker himself, helped to cover up Joker’s murder, or perhaps did something far worse than simply killing the Clown Prince of Crime, Kate is given some relief from knowing that Bruce was not necessarily above his own code in the Arrowverse either. This could also explain why Bruce felt the need to disappear from Gotham altogether, and take Batman with him, possibly because he didn’t feel worthy of being the city’s hero anymore.

On top of all of these many developments with the show’s heroes, the lead villains also got their own sharp subplot in this episode, as they’re forced to try and adjust to life in Arkham Asylum. This provides an interesting blend between old-school Arkham treatment (read: horrific treatment that would never be allowed in any real-world mental hospital), and surprisingly diplomatic group therapy, complete with former Batwoman villains-of-the-week, Tommy Elliot and Margot Pyle/Magpie being present in the common area. We even learn in this episode that Tommy was apparently the one who hired Lucius Fox’s killer, thankfully suggesting that Tommy’s character will be put to much better use later in the series, particularly since his Bruce Wayne obsession is clearly growing within Arkham. It’s inevitable that we’ll have to wait until at least next season to see the Arrowverse’s Tommy Elliot get an honest chance at becoming Hush, his better-known DC Comics villain identity, but I’m thrilled to see that Batwoman is finally laying that foundation. It’s especially great when Alice manages to use Tommy so that she can enable Mouse to kill the head doctor at Arkham, and have Mouse replace him to boot, priming the two villains to kick off another wicked plan from within the walls of the asylum!

Lastly, Mary got another surprisingly rewarding appearance in this episode, potentially suggesting that she’s actually going to be a good character now, and not a constant blight on Batwoman’s writing. Kate even finally tells Mary the truth about her being Batwoman as well, something that Luke humourously still tries to cover up, despite Kate fully accepting the idea of bringing Mary into her inner circle. The idea of Sophie and Julia running a Crows task force together is also incredibly promising, and something that we hopefully won’t have to wait until next season to see properly fleshed out. Overall, it’s awesome to see that, “A Narrow Escape” is keeping Batwoman’s recently boosted storytelling momentum going very strong. Kate, Luke and Alice all get standout storylines here, complete with a legitimately interesting and unpredictable villain-of-the-week for Kate to square off against, one that keeps feeding the overall mystery behind the season to excellent effect. It would have been nice if the show had mined more story depth from Kate’s Batwoman absence, which might as well have not happened, but I am nonetheless very happy to see that Batwoman is maintaining such a strong narrative foothold now, even if that’s finally occurring disappointingly late in the season.