NOTE: Some spoilers from throughout the fifth season of, “Supergirl” are present in this review

As much as Supergirl has an enormous problem with virtue signaling and soapbox-fueled grandstanding, the show did ultimately churn out a massive saving grace that led to last season being one of the series’ best; Lex Luthor. After teasing the off-screen presence of Superman’s arch-nemesis for years, Lex finally came to National City in Season Four, portrayed in a standout turn by Two and a Half Men’s Jon Cryer, whereupon he enacted a grand plan that reached all the way to the heights of the American presidential administration!… Then Lex died, being murdered at the hands of his adoptive sister, Lena. Fortunately, the Arrowverse had the good sense to reverse Lex’s untimely demise this season, and that’s a great thing, because Lex continues to be the best thing about Supergirl at this point, alongside his brilliant, but misguided sister.

You may have noticed that I didn’t lead off with anything about Supergirl herself, nor any of her faithful friends. This is because Supergirl delivers a very bland and forgettable fifth season when it comes to its heroes, at least, for the most part. After a legitimately brilliant villain plot managed to emerge from last season’s excessive political soapboxing, Supergirl unfortunately fell back into old habits in Season Five, which was made worse by a new batch of villains that just can’t compare to Jon Cryer’s Lex Luthor. These villains are part of an organization called Leviathan, and they represent more tired, insufferable virtue signaling from Supergirl, namely being an alien collective that wants to take over the world through technology. That’s not a terrible idea on its own, but when Leviathan has absolutely nothing to do with their DC Comics inspiration in the Arrowverse, pushing a technologically impossible VR lens fantasy that thoroughly breaks the bounds of recognizable reality, they just end up being another batch of forgettable alien baddies, in a show that seems to ironically do a better job with its human foes than its extra-terrestrial ones.

Perhaps the worst indictment of Supergirl’s continued, frequent blandness in Season Five however is the fallout from the much-anticipated Crisis on Infinite Earths crossover that was shared between The CW’s ongoing DC dramas, along with tons of other live-action DC media from the past, present and future. This crossover quickly resulted in the total annihilation of Supergirl’s original home universe, Earth-38, eventually leading to the characters and lore of Earth-38 being folded in with the Arrowverse’s most frequent Earth-1 universe, in order to contribute to the creation of Earth-Prime, a brand new world that fully unites all of The CW’s ongoing DC shows in one singular universe. This means, at long last, Supergirl finally shares the same home universe as Arrow, The Flash, Legends of Tomorrow and Batwoman (and now Black Lightning to boot!), and what does the series have to show for it? Practically nothing, beyond some token mentions of CatCo and J’onn J’onzz being more easily accessible on the other Arrowverse shows.

Again, thank God for the Luthor siblings, who are the single greatest reason to keep watching Supergirl at this point, particularly with Supergirl’s looming spin-off, Superman & Lois scheduled to debut on The CW in January. Where Supergirl’s heroes largely went in circles on tired, disposable plots against a forgettable, unremarkable band of alien villains in Season Five, the Luthor siblings absolutely shone this season, even with Lex not appearing on Supergirl proper until after Crisis on Infinite Earths had concluded. This leaves Lena to shoulder the bulk of the Luthor drama early in the season, which she manages to do at least somewhat effectively, after Kara fesses up about her secret identity, shortly after Lex tells Lena that Kara is Supergirl with his initial dying breath. This eventually results in an emotional rift gradually forming between the two women, until Lena’s anguish gives birth to a scientific initiative called Non Noncere, a psychological treatment that forcibly prevents humans from wanting to hurt each other, something that eventually becomes perverted from Lex’s own subjective desire to destroy Leviathan on his own terms.

Going back to Lex, another of the biggest changes to Supergirl’s world through the creation of Earth-Prime, alongside Supergirl’s characters and home city now co-existing on the same Earth as every other current DC drama in The CW’s lineup, is Lex using the Book of Destiny to not only make himself one of the Paragons that contributed to the multiverse-destroying Anti-Monitor’s ultimate neutralization, but also to re-write himself as a beloved, Nobel Prize-winning hero on Earth-Prime. This means that Lex’s criminal career and hatred of Superman is no longer known to the public at large. This not only leaves Team Supergirl without any means to prove that Lex is a villain, but also leaves Lex completely in charge of the DEO, which is eventually destroyed at the hands of Leviathan this season, conveniently after J’onn builds a small lair for his friends, complete with metaphorical costume hangers for The Flash, Superman and Batwoman as well.

Lex’s obsession with destroying Supergirl in Season Five is the one thing that threatens to undo him and his ultimate plans as well, even starting at square one on Earth-Prime, as a much-beloved hero. This inevitable downfall appears to have been pushed to next season however, after Supergirl’s fifth season ended up losing three planned episodes to the COVID-19 pandemic, forcing the season to end with a mostly unsatisfying conclusion, one that saw Leviathan hastily and pathetically defeated by Brainy, after he quickly bottles them in one of his ancestors’ world capsules. To his credit though, Brainy is one of the only Supergirl heroes that actually stood out this season. After an alternate self warns Brainy of certain destruction for the world if he doesn’t go along with Lex’s ideals, Brainy is forced to alienate his friends, abusing his new position of power at the since-destroyed DEO, in order to pose as an agent for Lex. This is a smart way to call back to Brainy’s lineage as a descendant of frequent Superman nemesis, Brainiac, one that flirts with the idea of making Brainiac a major villain in a Supergirl season that’s all about abuse of technology, and yet, Supergirl doesn’t even have the imagination to do that. 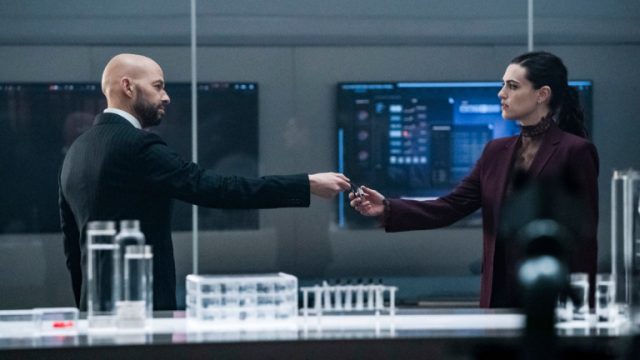 Even the all-new characters introduced in Season Five feel like a complete waste. Eve Tessmacher is reborn into an A.I. construct called, “Hope” during Lena’s development of Non Noncere for example, but once Earth-38 is destroyed, and Earth-Prime is formed in its place, Hope disappears, and is replaced by the original Eve again. Likewise, James actually leaves the show this season, being replaced by his sister, Kelly, who becomes Alex’s new girlfriend… And, “Alex’s girlfriend” seems to be most of Kelly’s personality profile so far. Shortly before this, CatCo is also taken over by a new parent company, Obsidian North, a Leviathan front that develops the ‘evil’ VR lenses, headed up by Andrea Rojas, an initially interesting CEO character that’s obsessed with engagement over integrity, and has a secret identity as shadow-manipulating Leviathan enforcer, Acrata… Until Earth-Prime is created, at which point, Andrea becomes a bland, oblivious CEO stereotype that’s no longer activated by Leviathan, and mostly loses her Acrata identity. By far the worst offender among the new characters in Season Five however is William Dey, a new CatCo reporter and love interest to Kara that doesn’t exist in DC Comics lore, whose late best friend was turned by Leviathan and eventually killed, eventually leading William to be kind of mean, then kind of nice, then mostly be an incompetent reporter that fails to move the plot along that effectively. Seriously, why is William part of this show’s leads?!

In fact, this leads me to recall the single greatest problem with Supergirl right now, even considering its frequently irritating obsession with performative wokeness and tired, infantile virtue signaling; Kara seemingly has nowhere else to go at this point, and nor do most of the other leads. Kara’s big mission on this show wasn’t necessarily to save National City, or prevent some massive crisis. It was simply to become a recognized and beloved superhero who’s independent of Superman, and she’s done that… So now what? Supergirl may be mining plenty of drama and intrigue from the Luthor siblings, but Team Supergirl itself too often feels directionless and uninspired in recent years, being more reactive than proactive. They’re in dire need of challenging, envelope-pushing new storylines, and as long as Supergirl is overly concerned with being clean-cut and inoffensive, it just can’t really achieve anything like that. This is why the Luthor siblings are succeeding where Team Supergirl is currently failing; The Luthor siblings are actually being pushed to morally interpretive, interesting territory, with their flaws and struggles poking through otherwise ambitious story ideas that are true to their DC Comics origins, while contributing something fresh and new to these personalities, as framed through the specific lens of Supergirl’s world.

The bottom line is that Supergirl’s fifth season is largely salvaged by a handful of characters, but otherwise, it’s frustratingly mediocre and forgettable, even after the show’s original universe was destroyed, and replaced with a brand new, re-written universe that folds Supergirl directly into the same reality as The CW’s other recent and ongoing DC dramas. Leviathan are bland villains, Team Supergirl is made up of mostly bland heroes at this point (Brainy notwithstanding), and the show’s latest eye-rolling effort to finger wag about abuse of technology doesn’t even manage to stand out to any notable degree. Supergirl’s fifth season losing three planned episodes to the COVID-19 pandemic didn’t do its weak, premature season finale any favours either, with the show not even being able to muster a fun tease for next season this time, as per tradition. Adding insult to injury there as well is that Supergirl’s sixth season has been delayed further into 2021, likely not premiering until at least next April or May. Frankly, the show should use that extra time to come up with something a lot better than the same old, repetitive schtick, because virtue signaling alone is not enough to make Supergirl appealing. Quite the opposite, in fact.

Supergirl is in desperate need of an overhaul in Season Six, one that pushes all of its characters, not just some, into challenging, complicated new obstacles that don’t have grade school interpretations or easy, unrealistic answers. With Superman & Lois on the way especially, Supergirl needs to try harder and do better, and if it’s not going to do anything beyond thinking of boilerplate, cliched issues to grandstand about, then it needs to conclude itself, because its necessity among the Arrowverse’s current series ensemble is really getting harder to justify at this point.

Supergirl: Season Five Review
The Luthor siblings and Brainy largely salvage an otherwise bland, forgettable fifth season of Supergirl, a series that even a whole new home universe fails to inject much fresh vitality into at this point.
THE GOOD STUFF
THE NOT-SO-GOOD STUFF
2020-05-29
70%Overall Score
Reader Rating: (0 Votes)
0%