Harley’s deflection of her romantic feelings toward her best friend culminated in a declaration of a raging bachelorette party last week, and Harley Quinn wasted no time cutting directly to the festivities this week. “Bachelorette” presents a promising duo of storylines that unfold between Ivy’s bachelorette party, and Kite Man’s bachelor party, though for all of the comedic potential behind these ideas, the jokes are a lot spottier than you may expect. This unfortunately leads to something of a low point for Harley Quinn’s otherwise superb sophomore season, with this week’s offering ultimately feeling like a disappointing filler episode that spends too much of its runtime on ineffectual, repetitive jokes.

It’s really a shame, because the premise behind Ivy’s bachelorette party in particular is absolutely ingenious. Harley decides to gather a group of Ivy’s ‘friends’, consisting of Catwoman, Nora Fries and a kindergarten friend named Jennifer (whom Harley insists on calling, “Jen”, much to her chagrin as a boring house wife and mother), flying them all via invisible jet to the still-missing Wonder Woman’s secret home island of Themyscira. Naturally, the women have a hard time enjoying themselves at first, which makes it apparent that Harley is simply trying to pull out all the stops for Ivy, so Harley doesn’t have to focus on the kiss that the two shared after escaping Bane’s prison.

This is where the jokes start rapidly running on fumes though. The repeated incidents of birds hitting the invisible vehicles of Themyscira is an early warning sign, and after that, this episode keeps falling back on the same cliched, “Bachelorette party not going as well as hoped” assembly line of humour. Even Harley and Ivy getting drunk and hooking up feels predictable, with the two impotently insisting that they must never allow this to happen again. Frankly, I wish that this episode had focused more on events like those at Themyscira’s uncharacteristic male strip club, Hedonikka, and Nora Fries hooking up with Maxie Zeus there, who is inexplicably an announcer for the strippers. I guess this kind of makes sense, considering Maxie Zeus’ whole deal in DC Comics lore, but how the hell did Maxie get all the way from being a motivational speaker in Gotham City to becoming a strip club announcer on Themyscira?

Fortunately, this core storyline does pick up a bit towards the climax of the episode, namely when Harley reveals that she actually intends the final day of Ivy’s bachelorette party to be about destroying the resort, since Themyscira’s queen, Hippolyta has been hypnotized by resort manager, Eris (a comically obvious fact), and is being coerced into signing Themyscira’s development rights over to Lex Luthor, for an environmentally damaging Fyre Festival-esque event. Oh, yeah, Lex Luthor survived the destruction of the Legion of Doom, apparently. That came out of nowhere. Regardless, the climax of Harley, Ivy and their gal pals laying waste to the resort and tossing Eris to her death is at least a funny payoff, as is Harley and Ivy hooking up yet again after the subsequent party. Inevitably though, after Harley finally professes her love for Ivy at this point, Ivy ultimately rejects her, saying that she can’t trust the infamously flighty Harley with her heart, in another surprisingly somber conclusion to a Harley Quinn episode. 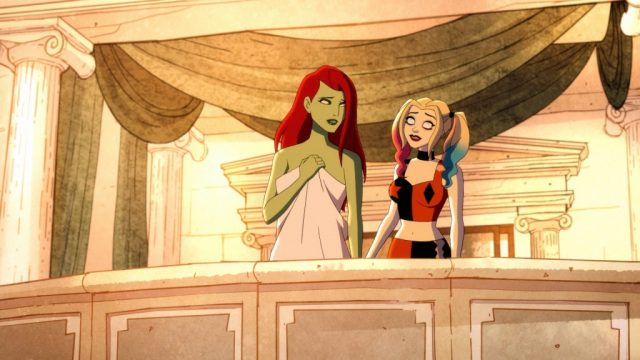 Even then however, it feels like this won’t ultimately stick. Harley Quinn makes it a point to start predictably unraveling the Ivy/Kite Man romance here, despite it being outwardly sweet and perfect. This is primarily supposed to be done during this episode’s subplot, where Kite Man hosts his own bachelor party on a boat with Clayface, King Shark and Frank the Plant (where’s he been lately?), only for King Shark to be called back to his underwater kingdom to marry Tabitha, and prevent war between the shark clans. Yes, that throwaway King Shark joke from Mr. Freeze’s lair several episodes ago ends up hijacking this entire subplot, which feels rather head-scratching, to say the least. The ultimate payoff is that King Shark eventually capitulates to his father’s demands to marry Tabitha and unite the shark kingdoms, but nonetheless professes to secretly have his own undercover romantic relationships. That’s well and good, but outside of a rather weird musical number about being able to poop wherever you want underwater, this subplot contributes nothing of true value to this episode’s storytelling, and mostly exists just to fill up time between events on Themyscira.

Kite Man’s bachelor party being squandered feels like a huge mistake for Harley Quinn to make. Even on Themyscira however, the show feels like it’s weirdly all over the map, leading to a frustratingly uneven episode that just can’t find an organic way to start building on the sexual tension between Harley and Ivy, nor the inevitable destruction of the Ivy/Kite Man relationship. Thus, “Bachelorette” ends up being a rare misfire for Harley Quinn, despite its promising dual storylines. Everything just felt weirdly rushed in its execution here, including a sudden reveal that Lex Luthor is alive and well, something that should have been given a lot more buildup. Even the surprise romance between Nora Fries and Maxie Zeus is something that could have gone somewhere very amusing, but it’s lost in the shuffle of an episode that just doesn’t seem to know where to go with its humour or its storytelling. It seems apparent at this point that the Ivy/Kite Man relationship is now going to linger throughout the rest of this season as well, even though we all know it’s doomed. It’s sad that Harley Quinn couldn’t make the most of this little side jaunt with its characters, but hopefully the series can regain its footing next week, when it likely returns to new New Gotham.