Harley Quinn has left its eponymous anti-heroine without a crew, or any options, after last week’s episode, as Doctor Psycho enacts his plan to take over Gotham City. “A Fight Worth Fighting For” thus continues to build up to the climax for Harley Quinn’s sophomore season, after that climax kicked into high gear last week. Having dropped the amnesiac Joker back into the chemical vat that first transformed him into the Clown Prince of Crime, Harley has now restored her homicidal ex-boyfriend back to ‘normal’, albeit also at her mercy, after she pulls out an old Suicide Squad trick to keep her former lover in line; Putting a bomb in his head that Harley threatens to detonate if Joker disobeys her!

“A Fight Worth Fighting For” is very clearly a bridging chapter for Harley Quinn. Even the bookends of the episode seem to make this apparent, as Frank the Plant and Chaz strangely do a recap of the big Doctor Psycho twist that occurred just last week. It feels a bit odd and unnecessary, especially when Frank makes the claim that the producers want to shoehorn him into the show because audiences love him, and yet, Frank has barely shown up all season so far? I don’t get it. Well, in any case, Doctor Psycho remains in control of Darkseid’s Parademon army, and this leaves all of Gotham also under Psycho’s control. All that’s left is for Psycho to expand his evil designs to the world at large, and he can only do so if he brings Darkseid the head of Harley Quinn!

This presents a pretty solid set of stakes for this season’s climax, alongside Harley continuing to struggle with her feelings for Ivy. It does feel like Harley Quinn has to eat up a whole episode to properly lay out the full scale of the conflicts behind this season’s final two episodes though, and that’s a bit annoying in the moment, when the core storytelling seems to serve no other purpose for the characters. This entire episode is spent hastily moving along major storylines to wherever they need to be for the next two weeks, including a now-recovered Joker having to face his former girlfriend, Bethany under his old criminal identity, while Batman also makes a long overdue return to protecting Gotham. These narrative turns are very clearly inspired by DC Comics storyline, “Going Sane”, which similarly involved Joker repairing his visage and going legit as an ordinary suburban citizen, under the alias, “Joe Kerr” (get it?), when he believed Batman had died, only to murder his girlfriend and return to his old criminal ways immediately after he discovered that the Dark Knight was still alive.

Disappointingly though, Harley Quinn barely scratches the surface of its connection to that storyline here. The show truly does push the limits of offending Batman/DC fans on this note as well, when Joker is willing to admit that he’s in love with Bethany, and that Harley should continue fighting for Ivy’s affections, which feels very out-of-character for him! This occurs after Joker initially offends Bethany after trying to get the Queen of Fables’ book back, which leads to Bethany throwing the book into the open arms of a Parademon. Harley and Joker then eventually manage to get the book back from a Parademon hive, nearly being killed in the process as well, only to be saved by Batman.

The fact that the fairy tale book that Harley and Joker went to all that trouble to find is fake could have been funny, but disappointingly, it kind of comes off as lazy in the end, specifically when it forces Joker to quickly reconcile with Bethany. Likewise, Joker deciding he’s not going to change who he is, nor is any harm going to come to his girlfriend or her family, feels head-scratching and completely inconsistent with the character’s whims, even on this very show! Maybe this will change later on, but it does feel like Harley Quinn is starting to over-simplify its romantic storylines at this point, and that’s a pretty serious problem when the series is trying to take on Harley’s and Ivy’s well-known romantic relationship, taken directly from DC Comics lore. 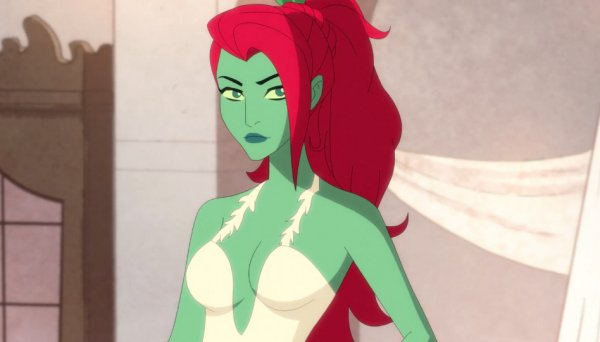 Speaking of Ivy, she actually managed to occupy the funniest storyline of this episode, even if it ends up being a fairly inconsequential subplot. Since Ivy has rejected Harley, and apparently has no other friends (I guess she can’t even call on Nora Fries or Catwoman anymore?), she drags Kite Man along to help plan her wedding, complete with picking out her wedding dress. Ivy being desperate to get her nuptials going as quickly as possible, and forcing Kite Man to be her gal pal, is pretty amusing, as is Ivy swearing revenge on Doctor Psycho only after a Parademon causes a single shard of glass to force her to purchase a $13,000 Vera Wang wedding dress. In fact, the Parademons just being widely accepted as a lethal nuisance around Gotham in general is pretty funny at this point, which is why it’s too bad that the Parademon humour is constantly being interrupted by this week’s hasty core storyline shared between Harley and Joker.

At least Ivy’s subplot gets a memorable conclusion though, rounding off this episode when Psycho hypnotizes Ivy after she attempts to take him down, and subsequently sends her to Bethany’s door, in order to kill Harley! “A Fight Worth Fighting For” thus manages to position Harley Quinn pretty well for its impending Season Two climax, but the show once again stalls a bit here, since it has to quickly rush through several key story elements. Batman’s return feels very sudden, especially when he’s relegated to being a mere Deus Ex Machina in this episode, and likewise, Joker suddenly embracing being a suburban stepfather, even under his old identity, feels too abrupt and inconsistent with his character. Despite such a heavy focus on the growth being shared between Harley and Joker this week, it was actually Ivy and the Parademons that owned the best humour and drama in equal measure. Still, now that the Justice League has finally returned, and Harley actually stands a fighting chance against Psycho and Riddler, we can get the ball rolling on saving Gotham, as well as Harley’s latest chance to try and win Ivy’s heart.

Harley Quinn 2.11: "A Fight Worth Fighting For" Review
Harley Quinn suffers from too much hasty plotting this week, but Ivy and the ongoing Parademon invasion nicely pick up the slack.
THE GOOD STUFF
THE NOT-SO-GOOD STUFF
2020-06-14
78%Overall Score
Reader Rating: (0 Votes)
0%