The Boys is back, and now it’s weekly! Despite Season One releasing onto Amazon Prime Video all at once last year, Season Two is instead opting for a weekly episode format, despite spanning the same eight-episode length as Season One. This is supposedly a creative choice on the part of the showrunners, not some sort of corporate mandate from Amazon, supposedly to allow audiences to marinate on the social commentary and general bloody insanity from any new episode of the series. Season Two of The Boys promises to be gorier, more outrageous, more unhinged and more shocking than Season One ever was to boot, and in the season premiere, “The Big Ride”, that promise definitely feels like it’s being lived up to! We even get three episodes all at once to kick us off on the first week, along with an early announcement that The Boys has already been renewed for Season Three! That’s definitely ambitious!

Fortunately, “The Big Ride” also knocks the start of Season Two out of the park, presenting an episode that fires on all cylinders with the same chaotic, messy, nihilistic storytelling that made The Boys’ first season such a huge success for Amazon. Right from the jump, the show dives right back into its uncomfortable, highly violent celebrity/political satire, as Black Noir takes a bloody trip to the Middle East to slay the, “Supe Terrorist”, Naqib, a mission that’s successful and traumatic as can be! Vought meanwhile fabricates a false public death story for the fallen Translucent, complete with a cheesy, overblown funeral that Homelander and Starlight contribute celebrity appearances to. It’s the perfect way to start this sophomore season, proving that The Boys isn’t missing a beat, even with the move to a weekly episode format. 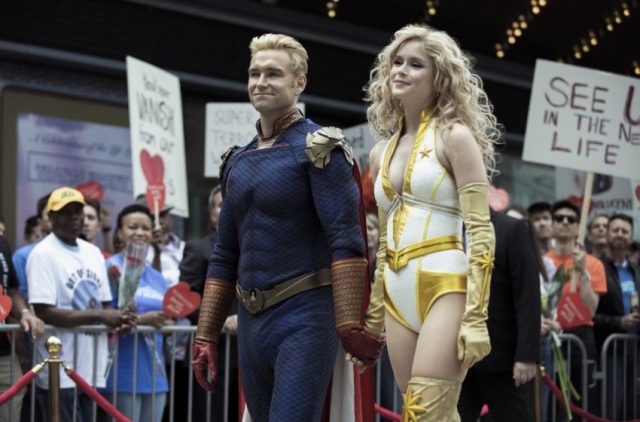 This season premiere hits you with quite a lot of story material beyond this point, particularly surrounding the race for Compound V, which Hughie is still attempting to obtain, with the reluctant help of Annie. This creates a superb moral contrast between the two characters, with Hughie being stuck with a bunch of criminals despite nonetheless refusing to abandon his heroic mission to expose Vought, while Annie is forced to resort to the criminal deed of blackmailing another Supe that works at Vought, in order to try and get some Compound V smuggled to her. Making Annie stoop especially low is intriguing, but something disturbing this otherwise strong story development for Hughie and Annie alike is the fact that their actual romance is still a low point in the storytelling for now, chiefly because Hughie is still insisting on lying to Annie about the details of his own mission with the Boys! Annie even says that she knows Hughie is lying, so why does he keep doing it?! This trope is already overdone in other superhero media, and The Boys is definitely too good of a show to be resorting to this contrived secret identity drama!

Outside of that though, this kick-off to Season Two is nigh on flawless, presenting multiple character perspectives that all foreshadow promising plot developments for the upcoming season, even with Billy Butcher being absent for almost this entire episode. The pressure on Vought to rebuild The Seven after coming out about Translucent’s death is palpable, and naturally, most of that pressure falls on Homelander, who is ironically positioning himself to conquer Vought from the inside. After Vought initially attempts to hire a Daredevil-esque superhero named Blindspot, whom Homelander permanently cripples in disgust (good to see he hasn’t changed…), Mr. Edgar nonetheless appoints a new superhero named Stormfront to succeed Translucent, without Homelander’s approval, while The Deep is also about to be replaced. The subsequent confrontation between Homelander and Edgar is another of the best scenes in this episode to boot, with even Homelander being helpless to make a dent in Giancarlo Esposito’s outstanding sense of menace! It’s awesome to see the character of Mr. Edgar finally start getting some earnest development in Season Two, and I have a feeling we can expect big things ahead for him! 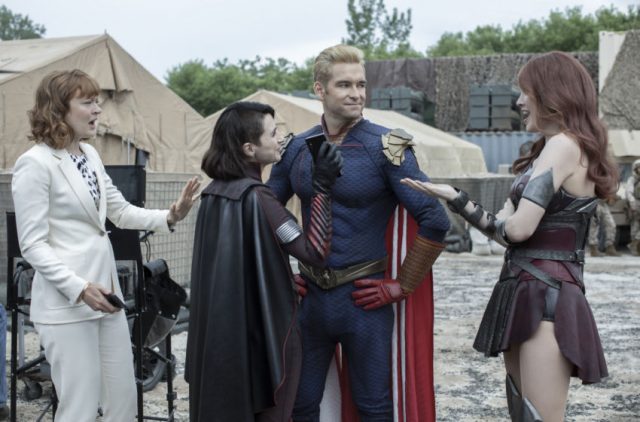 Speaking of The Deep, he naturally continues to hit bottom in Sandusky, Ohio with the start of Season Two, culminating in him being jailed for drunkenly mouthing off to some kids at a water park. Deep ends up being bailed out by another Supe however, Eagle the Archer, a Green Arrow-esque character who has found his way to a new-age church, the Church of the Collective, and suggests that Deep rebuild his reputation there. Ah, yes, I see religion satire is still being slipped into The Boys, even after Annie more or less burned the bridge with her old bible group last season. That’s quickly becoming a favourite dark comedy subject for executive producers, Seth Rogen and Evan Goldberg, who already crushed it after overseeing their previous comic book-inspired dramedy series, AMC’s Preacher. We don’t get to see a payoff to Deep’s new church connection yet, but it’s sure to be another interesting slice of biting social satire this season, especially with Deep ultimately trying to swim his way back to what may well be a sinking ship, pun intended.

It gets worse too. After being forced to get money by authorizing his resources for smuggling, Frenchie’s connections ultimately deceive him, and bring a Supe terrorist, or, “Super-villain”, as Vought is quickly trying to re-brand them before they’re widely known to the public (Homelander overseeing a focus group to this effect is yet another highlight scene!), into New York. This has Hughie convincing the rest of the Boys to make contact with Susan Raynor, an ally of Butcher’s, and someone with a lot of resources as Deputy Director of the CIA. When the Boys’ intel leads Raynor to put together that someone at Vought created Supe terrorists themselves however, Raynor’s head is suddenly exploded by unknown means, forcing the Boys to flee! Raynor’s death is not only one of the biggest shocks of this episode, but one that also effectively leaves the Boys without any reliable means of striking at Vought. Fortunately, Butcher returns soon after this, having been summoned by Frenchie against Hughie’s wishes. The Boys are finally back together again, but do they have any hope of taking down Vought anymore, even considering Annie’s present sabotage?

The Boys hasn’t lost one bit of momentum with the start of its second season, while also ratcheting up the violence and social satire to very strong effect! “The Big Ride” is an excellent season premiere in virtually every respect, setting up lots of promising new storylines, and continuing to pay off key plot developments from Season One, all while shuffling characters into new and interesting predicaments. Even Homelander is ultimately taken down a peg by Mr. Edgar, a new antagonist addition that appears to be excelling, now that he’s actually been brought properly into the show’s present-day storytelling. It sucks that Hughie’s and Annie’s strained romance is still a drag for the time being, but there’s plenty of time to fix this, especially while The Boys just seems to keep getting better with every episode!

The Boys 2.1: "The Big Ride" Review
The Boys returns for a weekly second season, kicking things off with an overall excellent season premiere, as forces within and without Vought struggle to regain control over recent events.
THE GOOD STUFF
THE NOT-SO-GOOD STUFF
2020-09-12
93%Overall Score
Reader Rating: (0 Votes)
0%