Although Telltale quickly became synonymous with episodic gaming this generation, it wasn’t the only developer who tried its hand at such design. In fact, DONTNOD took the format and ran with it, creating one of the best and most memorable experiences of this console cycle in the process. Of course, I’m talking about Life is Strange, which took Telltale’s format and made something uniquely great with it. Something that was more polished and, to be honest, better developed than anything that The Walking Dead‘s developers ever made.

After concluding the story arc of last year’s Life is Strange 2 (which I still need for finish, for some reason), DONTNOD quietly set to work on something else. The result is Tell Me Why; a Microsoft exclusive game that continues on with the developer’s beloved episodic format. However, instead of waiting months for each subsequent episode to release, gamers only had to wait one week in-between each of these. They’re all available on, or going to be available on, Xbox Game Pass too.

Tell Me Why will unfortunately be a polarizing game because of its mature subject matter. Like Life is Strange 2, it delves into topics that some people simply don’t want to deal with or don’t like for some reason. This time around, that subject is transgenderism. It’s something that shouldn’t turn people off, and it’d be sad if fans of these games overlooked this particular one because of it, but that’s the world we live in.

Things centre upon two twins, Alyson and Tyler Ronan. Tyler was born female, but transitioned during his childhood, which seemed to change their mother in awful ways. As such, the twins harbour lots of pain and fear. The main reason for this is that, after Alyson cut Tyler’s hair and made him look more masculine, their mother reacted strongly and what resulted led to her death. Tyler believes that she attempted to kill him, and was sent to a form of juvenile detention for protecting himself.

It’s at this non-secure home for troubled youth where we find Tyler, as he prepares to leave following graduation and time spent as a counsellor afterwards. Although he could’ve left earlier, he decided to stay there and ignored visitation requests from his sister. That was, until the start of Tell Me Why, where we watch as the  two prepare to see each other for the first time in a number of years. Alyson frets about what she should bring and what she should say, while Tyler packs up his belongings and says goodbye to the room and home he’s become accustomed to.

Once all of the above is over with and the twins have rekindled their relationship, they embark on a ferry-based trip across their home state of wild Alaska. Their goal? To revisit their childhood home in the middle of nowhere, in order to prepare it for sale. The place has sat empty ever since that horrible night, and things need to be gone through before it’s (hopefully) sold. The scary part is that returning will likely dredge up old memories, many of which won’t be very pleasant. 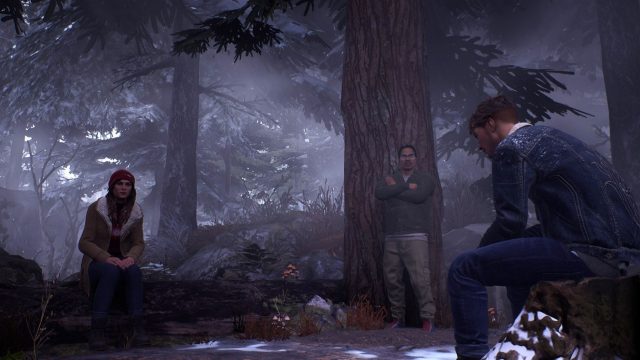 Much of Tell Me Why ends up being about the relationship between Alyson and Tyler, which has been strained due to their time apart, and Alyson’s moving in with the cop who arrested her brother following her mother’s death. A lot of the narrative is also about the bond the two have and will always share, as well as their childhood traumas which must be dealt with. I appreciate how DONTNOD approached these sensitive topics, and how lifelike they made the two characters and their bond. Nothing feels forced, and none of it feels inorganic. A really nice touch was giving the siblings a deep backstory, during which they developed their own make believe land of trolls and other creatures, with the help of their storytelling mom. The resulting stories were chronicled in a book by their mother, and some of the scarier elements still bother them to this day. Hell, those made up stories are linked to several puzzles that one can choose to solve or avoid. One such puzzle involves opening a locked door, which you can try to force open instead.

As is often the case with these DONTNOD games, Alyson and Tyler share a special bond that is (perhaps) unique to them. The two can not only speak telepathically, without using their mouths or uttering a word, but they are also able to conjure up and watch strong memories from years gone by. This is done by finding glowing outlines of themselves and holding a trigger button. Watching these memories helps progress the story, and gives you insight into what happened around a decade prior. Did things occur exactly as the siblings remember them? Or did something else maybe happen? Perhaps something that didn’t involve their mother losing it over one of her daughters transitioning into a boy. Also, who was their father?

Learning about the past doesn’t simply involve walking around the Ronan shack and looking for mementos, or deciding which pieces of furniture to keep, sell or donate. No, there’s more to this game than that, otherwise things would be pretty boring, no? You’ll venture into the nearby town and talk to people who once knew you as a three-person family, talk to the town alcoholic who’s been looking after the house in your absence, solve light puzzles (like an incredibly easy circuit one, which allows you to turn the power back on) and more. Of course, there’s also lots of talking and decision making, with regards to which responses and general dialogue choices you’ll go with.

In the same vein as Life is Strange, Tell Me Why records your choices and changes based on them. As such, what you say and do has an impact on everything that transpires from there on out. Choices are also shown and evaluated at the end of each of the game’s two to three hour-long chapters, at which point they’re measured up against the whole community. If you’ve played this type of game, be it a Telltale or DONTNOD title, then you’ll know what to expect. If not, you’re in for an interesting new experience.

At just around 9 hours, this is a shorter than usual episodic game. That’s because there are only three chapters, as opposed to the usual five or six per season. It’s nice that things are contained, and that there isn’t much waiting involved. Tell Me Why deals with sensitive subject matter, and it’s good that everyone is able to play the game, experience its story and embody both Tyler and Alyson within a short period of time, as opposed to waiting months or close to a year before everything is concluded. It’s being on Game Pass is also a great thing.

Going into this game, I didn’t know what to expect or how much I’d enjoy it. I knew that the subject matter wouldn’t bother me, but I didn’t know a lot about the game. It seemed to come out of nowhere, even though it’d been revealed prior to release. With all that having been said, I’m happy that it exists and glad that I played through it, because it’s a very good and memorable game. DONTNOD handled this sensitive subject well, and their developers also did a good job of crafting a beautiful game that runs well and remains interesting throughout, even if it gets a bit slow. Then again, slow doesn’t always equal bad. It depends on the type of experience.

Presentation-wise, this is a real treat for the eyes and ears. The visuals are impressive, Alaska looks downright stunning, and the colours really pop amidst the hefty amount of winter snow. There’s lots to gawk at as a result. On top of that, almost all of the character models look really good, especially Tyler and his sister, Alyson. Their mom’s friend, who runs the convenience store, is the outlier here. Her character model lacks the definition the others possess, and looks quite dated as a result.

Like the storytelling, the music is good, the sound effects are effective, and the voice acting is also quite strong. That’s (once again) especially true of the main characters, who feel lifelike and do not come off as fictionally written video game characters. This is a good thing given the game’s subject matter and everything it deals with.

If you’re looking for an interesting, enjoyable, thought provoking and unique experience, Tell Me Why should be high on your list. Although it deals with sensitive subjects, any mature gamer should have no problem playing through it. It’s easy to become endeared to and interested in Tyler’s story, as well as that of Alyson, both of whom are dealing with quite a bit despite being pretty young.

This review is based on the Xbox One exclusive, which we were provided by Microsoft.

Tell Me Why Review
Tell Me Why is an interesting, enjoyable, well designed and memorable episodic experience. It handles delicate subject matter well, and presents a very mature game. One that feels almost real, thanks to deep and well written characters.
Visuals90%
Audio88%
Gameplay80%
Storyline90%
The Good Stuff
The Not-So-Good Stuff
2020-09-18
86%Overall Score
Reader Rating: (0 Votes)
0%