NOTE: This review may contain some mild spoilers for the first season of, “Space Force.” That said, the review is written to accommodate those who have not yet watched the series, and as such, will avoid discussion of major story developments

2020 being an election year for the United States of America has put plenty of hot button political issues into an international spotlight, one that’s spanned well beyond the U.S. in the developed world. Among the many bits of political discourse surrounding current U.S. president, Donald Trump however, Netflix has decided to zero in on an idea surrounding one of the lesser-spotlighted Trump Administration policies, namely the creation of a new branch of the U.S. military, known as the ‘Space Force’. This new Netflix Original Series hook came from The Office’s Steve Carell and Greg Daniels, who sold the idea of a workplace comedy set within a fictionalized version of Space Force to Netflix right off the bat, with Netflix immediately fast-tracking the series for a 2020 premiere.

With the American election’s voting process already underway in many parts of the country, this makes Space Force’s debut season certainly feel timely, even if the potential for a big power shift in the U.S. could immediately render the series dated as soon as next year. Still, perhaps Space Force could keep the oddball tenure of Donald Trump alive in its own, highly contained way, even if Joe Biden is elected to be the next U.S. President. Is that something the world wants? I don’t know. What I do know however is that Space Force is a fascinating experiment, one that frames an Oliver Stone-esque political commentary within an over-the-top workplace comedy structure, all wrapped around a heartfelt family drama. At least, that’s the recipe.

As funny as Space Force can be though, and as impressively star-studded as its lead cast is, it’s also true that the series’ first season is a bit of a mess in several respects. That’s not necessarily a death sentence on its own, mind you, since many ambitious comedies take a season or two to properly hit their stride. Hell, Netflix’s own highly acclaimed OG animated sitcom, BoJack Horseman wasn’t much to write home about during its own first season, but eventually grew into one of the best overall comedy offerings in the entire Netflix catalogue. Space Force could very well go the same way, especially with so much established talent behind it. We’ll just have to hope that the joke driving the show doesn’t quickly get old in 2021.

On top of being co-creator of the series as a whole, Steve Carell makes a welcome return to comedy in Space Force, filling the lead role of General Mark Naird. Naird has recently been promoted to the rank of four-star general, and the unseen, but very Trump-esque U.S. President of this show’s universe has decided to award Naird the honour of heading up the newly-created Space Force, the all-new sixth division of the U.S. Military. With the order immediately coming down that the President wants, “Boots on the moon” by 2024, Naird and his people have to scramble to try and accomplish this mission, while simultaneously figuring out how they’re supposed to operate in the first place. 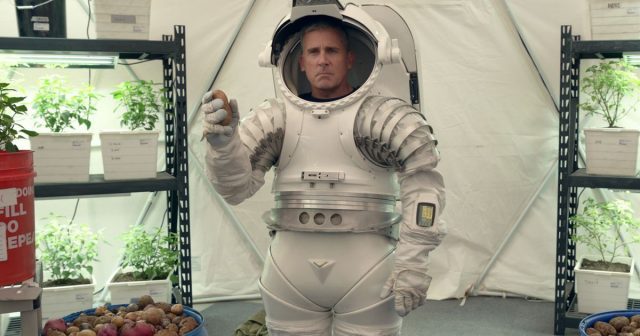 Carell is definitely using his recent stretch of thought-provoking dramas to try and inject some timely political commentary into Naird’s character, who is fastidious in his professional manner, but also comically oblivious, with just a pinch of Michael Scott added to what’s otherwise a more successful, ambitious character. Naird is ultimately a far cry from what Michael Scott was supposed to represent on The Office, but Carell still doesn’t completely abandon his panache for playing emotional/intellectual liabilities that often think they’re smarter than they actually are. Nicely bringing this joke home as well are some carefully selected guest spots for Lisa Kudrow, who plays Naird’s wife, Maggie, a character that’s been sentenced to decades in prison for some unknown, but apparently deplorable crime. As dark as this is, it’s surprisingly funny to not know exactly what the sweet, well-meaning Maggie could possibly have been imprisoned for, and this joke, blended with Kudrow’s usual sunny demeanour, can lead to some of the funniest scenes in Space Force’s debut season.

That said however, this storytelling direction also sometimes represents one of the weakest elements of Space Force’s first season, namely its attempts to be a family dramedy. The family dramedy angle just doesn’t seem to mesh that well with everything else going on. Poor Diana Silvers is often caught in the middle of this problem as Naird’s teenage daughter, Erin as well. Erin’s best scenes often involve her being away from her father in fact, particularly when she’s trying to carve out her own social niche in this show’s backwater setting of Wild Horse, Colorado. When Space Force tries to lean into the Naird family members’ shared struggles, it kind of falls apart, and starts to overthink itself. Fortunately, at least a few episodes contribute a big bright spot among the Naird family’s dysfunction, specifically the late Fred Willard. Willard plays Naird’s demetia-stricken father, er, Fred, a character that occasionally checks in on the Naird family proper via phone, while humourously failing to grasp how they ended up in Wild Horse, or what they’re doing there.

Space Force often works best when it spotlights the workers at Space Force and their professional struggles, rather than their personal lives, especially when the series manages to do this without re-treading the same jokes from The Office. The cast really excels on this professional note as well, with John Malkovich being an easy highlight as head scientist, Dr. Adrian Mallory, a brilliant foil to Carell’s Naird, as well as one of the funniest characters on the show overall. Ben Schwartz is also a particular highlight as F. Tony “Fuck Tony” Scaripiducci, Space Force’s fast-talking, vaguely untrustworthy social media manager, who is meant to satirize the U.S. political administration’s efforts to seem cool and relevant among Millennials while they attempt to make it to space, on what could very likely be a fool’s errand. Jimmy O. Yang and Tawny Newsome also round out Space Force’s professional ensemble effectively, as head scientist, Dr. Chan Kaifang, and Space Force military leader, Captain Angela Ali, respectively. These are the two most likable characters on the show in many respects, and they even strike up an unlikely friendship later in the season to boot, promising a particularly sweet shared character arc for both of them, should Space Force make it to a second season.

Even when Space Force is at the top of its comedic game however, it demands a certain amount of U.S. political savvy to get the most out of its jokes, and that can make the humour sometimes feel rather scattershot. It’s good that Space Force doesn’t talk down to its audience, in fairness, but if anything, it almost goes too far in the other direction, delivering jokes that can sometimes feel a little too pretentious and highbrow for what the show is trying to be. It’s a matter of nailing down a tone, which Space Force doesn’t consistently do in its first season. Like the eponymous members of its new military division, Space Force itself sometimes feels confused about what it’s trying to accomplish; Workplace sitcom? Political satire? Family dramedy? Sci-fi parody? Romantic comedy? It seems to stretch across all of these ideas and more. This in turn can sometimes stretch Space Force’s fundamental premise to breaking point.

Don’t get me wrong though; I like Space Force, personally, even if I also concede that it won’t be to everyone’s tastes. Even as someone who likes the series as well, I can’t deny that it has quite a few flaws in its first season, and needs to spend a bit more time refining its vision in order for the satire and heart to fully come together. That’s why I hope, regardless of how the upcoming American election turns out, that Space Force is allowed to continue with a second season. Even if its first ten episodes are a bit of a mess at times, there are lots of good ideas layered throughout the show’s recipe. Said recipe just hasn’t been perfected yet, and that’s not necessarily unusual for successful television comedies. Hell, many people forget that even The Office struggled out of the gate, and nearly got cancelled by NBC as a result! Obviously, NBC was right to keep faith in the series, and the fact that it was allowed to continue, against the odds, eventually gave us the seminal modern workplace sitcom, as well as one of the best overall sitcoms of all time!

Could Space Force achieve those same lofty heights in potential future seasons? Maybe, even if it’s admittedly not a guarantee. Like I said, Joe Biden potentially winning the U.S. Presidency could date Space Force much quicker than it would probably prefer, especially after Season One barely squeaked out during an election year, threatening to derail its comedic relevance before the show can even fully pull itself together. Perhaps a soft reboot under a Democratic president could also be what Space Force is missing though, should Netflix renew the series, and opt to go that route instead.

In any case, as it stands, Season One of Space Force is decent overall, despite its obvious faults. A potential renewal could certainly choose to keep the show under the Trump-satirizing umbrella in the end, even if Trump isn’t re-elected in the real world, but it’s also clear that Space Force needs some creative tweaks and added focus, regardless of which U.S. President its humour chooses to structure itself around. Netflix is admittedly hurting for high-profile sitcoms at this point though, with many of the streamer’s best comedic shows having either concluded or been prematurely cancelled by now. Thus, it may be prudent for Netflix to keep tinkering with Space Force, especially after the show appeared to be quite popular for several weeks after its initial debut. There’s still potential to mine here, but the combination of the imminent U.S. election, and the ongoing complications caused by the COVID-19 pandemic, could spell doom for Space Force at any moment. I guess this is another Netflix series that, much like its own fictionalized version of Space Force, is just going to have to beat those long odds. If nothing else, this is more spectacularly meta than even Carell and Daniels could have possibly envisioned!

Space Force: Season One Review
Space Force's first season is more uneven and inconsistent than it probably should be, but its lovable cast and sharp satire present plenty of potential for prospective future seasons.
THE GOOD STUFF
THE NOT-SO-GOOD STUFF
2020-10-20
70%Overall Score
Reader Rating: (0 Votes)
0%