The Mandalorian has been entertaining us with some fairly familiar misadventures for the first quarter of its second season, but this week’s episode officially kicks the new season into high gear! “Chapter 11: The Heiress” packs in some huge connections to other corners of the Star Wars universe, most notably two of its canonical animated shows, while further fleshing out the dark legacy of Mandalore, and how Din Djarin is about to get caught up in it in a big way. Before that though, the last steps must be taken to track down other Mandalorians, who are supposedly hiding out on the black market trading moon, Trask, behind one last treacherous challenge for Djarin and The Child.

It’s easy to recognize that, “Chapter 11: The Heiress” is far and away the best episode of The Mandalorian’s sophomore season at this point. Its fairly brisk 35-minute runtime is packed to the gills with suspense, action and rewarding developments for Star Wars fans, though even if you’re not up to date on the events of the Star Wars universe’s animated adventures, you’ll still find plenty to enjoy on Djarin’s latest mission. Said mission even kicks off with a satisfying resolution from last week to boot, as the Frog Lady is reunited with her lost husband, managing to salvage the majority of her eggs from the hungry clutches of The Child. This leads to Djarin getting a vital tip, namely that someone in the nearby bar can point him to the hideaway of some scattered Mandalorians. 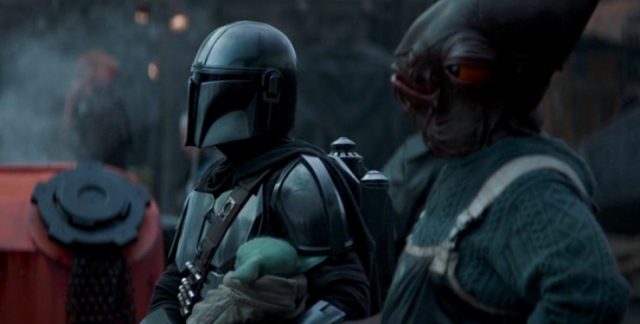 If you’re truly up to date on The Mandalorian however, you’ll know that Djarin’s final jaunt to the lost Mandalorians is anything but simple! After stowing along on a Quarren fishing vessel, Djarin is, surprise, betrayed by the Quarren crew, who push him and The Child into a pool containing a Mamacore, which more or less looks like a detached aquatic Sarlacc Pit. This is an impressively tense sequence, one that appears to legitimately offer no way out for Djarin and his infant charge!… Until the very Mandalorians that Djarin sought fly down, kill the Quarren crew, and rescue him! To Djarin’s disappointment however, the other Mandalorians immediately remove their helmets afterward, and reveal that they don’t follow the ways of the old Mandalorian teachings. Nonetheless, Star Wars fans are bound to be elated at the sight of these characters, who are led by Bo-Katan Kryze, a character formerly voiced by Batllestar Galactica alum, Katee Sackhoff within animated shows, Star Wars: The Clone Wars and Star Wars Rebels! Sackhoff even reprises the role of Bo-Katan in live-action here to boot, which is incredibly cool!

Now, if there’s one small issue in an otherwise excellent episode of The Mandalorian this week, it’s the fact that you miss a lot of the nuance and appeal from the show’s latest story developments if you’ve never watched Star Wars: The Clone Wars and/or Star Wars Rebels. They are both on Disney+ in their entirety though (hell, Star Wars: The Clone Wars released its seventh and final season exclusively on Disney+!), and both are well worth the viewership if you enjoy Star Wars, even if you’re an older viewer. Regardless, take a seat, because a huge amount of connections are established between The Mandalorian and the rest of Star Wars’ TV arm here, and if you’re not an avid Star Wars fan, it can be a little difficult to initially keep track of.

So, to sum up these standout developments, they begin with confirmation of something that was already hinted at during Season One of The Mandalorian; Djarin was rescued, adopted and trained not by ‘true’ Mandalorian warriors, but by Death Watch, the extremist Mandalorian religious cult that was formed to oppose Mandalore moving away from its old-world warrior teachings during the Age of the Republic (i.e. the prequel trilogy era). This is why Djarin’s old group used the mantra, “This is the Way”, and why Djarin, along with his former allies, believe they must never be seen without their helmets on. Next, Bo-Katan Kryze is the sister of the late Duchess Satine Kryze, a former love interest of Obi-Wan Kenobi, and the former leader of Mandalore, meaning that Bo-Katan is telling the truth when she says she’s the rightful heir of Mandalore. The problem aside from the Empire presumably occupying Mandalore at this point however is that Bo-Katan needs to solidify her claim with the Darksaber, the very same weapon that was shown to be held by Moff Gideon during the final moments of The Mandalorian’s first season. Understand all of that?

In any case, Bo-Katan agrees to point Djarin to what remains of the Jedi Order, if he assists with a mission to liberate some weapons from an Imperial Freighter. Djarin begrudgingly accepts, leaving The Child with the Frogs, and what happens next is a fantastic climax that’s full of Mandalorian-on-Stromtrooper carnage! Bryce Dallas Howard once again shines in the directors’ chair here, crafting a series of claustrophobic firefights that really show off the outstanding skills of even the ‘mainstream’ Mandalorians. There’s even one last twist in store to boot, when the Freighter’s captain attempts to crash it, in order to try and avoid Bo-Katan and her friends making off with the Imperials’ weapon stash! Obviously though, this plan is unsuccessful, even though it does give Bo-Katan a convenient opportunity to interrogate the Freighter’s captain about the whereabouts of the Darksaber. Now Djarin and the other Mandalorians can get up to speed on what viewers already know from Season One; The Darksaber is currently being wielded by The Mandalorian’s Imperial arch-villain, Moff Gideon.

Djarin ultimately turns down the mission to help liberate Mandalore (aw!), but he is nonetheless pointed towards his next stop, and it’s another big one for Star Wars fans; The forest planet of Corvus, which happens to be the hidden sanctuary of none other than Ahsoka Tano! Yep, as was extensively rumoured throughout production of this season, it seems that Ahsoka, Anakin Skywalker’s former Jedi Padawan during the Clone Wars, and later one of the Rebel Alliance’s best spies, is coming to The Mandalorian in her live-action debut, supposedly to be portrayed by Rosario Dawson! We may find out what Ahsoka has secretly been up to since the events of the original Star Wars trilogy as soon as next week to boot, after this episode ends with Djarin fetching The Child, before flying off in a shoddily-repaired Razor Crest. I guess it’s hard to find good help during the early years of the New Republic, especially on a seedy black market locale like Trask.

Overall, The Mandalorian crushed it this week, with, “Chapter 11: The Heiress” being easily Season Two’s best episode so far! The rewarding connections to other Star Wars TV shows is exceptionally exciting for fans, even if that fan service sometimes comes at the expense of non-fans probably not understanding most of the significance behind Bo-Katan’s current quest. Even if you have to consult Star Wars: The Clone Wars and Star Wars Rebels for most of the canonical backstory behind the Darksaber and Death Watch however, “Chapter 11: The Heiress” still presents another excellent directing showcase for Bryce Dallas Howard, while also being packed to the gills with exciting action and raw suspense. Sure, The Mandalorian is still leaning on its established formula here, but the writing and thrills are so good this week that it’s ultimately difficult to care about the astonishing frequency that Djarin gets double-crossed, lied to and/or betrayed by almost anyone he teams up with.

Plus, the imminent live-action debut of Ahsoka Tano being teased for next week is icing on the cake! Finally, The Mandalorian is building some meaningful bridges between other corners of the Star Wars universe beyond the original movie trilogy, and I can’t wait to see how Djarin is forced to confront the legacy of his race’s age-old enemies in the weeks ahead!

The Mandalorian 2.3: "Chapter 11: The Heiress" Review
The Mandalorian soars with Season Two's strongest episode yet this week, as an eventful trip to Trask eventually leads to Djarin allying with a Mandalorian resistance effort.
THE GOOD STUFF
THE NOT-SO-GOOD STUFF
2020-11-14
92%Overall Score
Reader Rating: (0 Votes)
0%