Black Lightning continues to push the Pierce family to their bitter limits in its final season’s second episode this week, despite the fact that their repetitive squabbling continues to drag the show down. Fortunately, “The Book of Reconstruction: Chapter Two: Unacceptable Losses” at least ratchets up the excitement of the series a bit, particularly where Jefferson and Lynn are concerned. Anissa even gets a surprising new social link in this episode, while Jennifer continues to become drunk on her own overwhelming power. There’s also still plenty of drama across Freeland, especially while a gang war between The 100 and the Kobra Cartel continues to rage on, but the Pierce family themselves sadly remain Black Lightning’s weakest link for now.

One thing I can definitely appreciate about the first couple of episodes for Black Lightning’s final season however is that they appear to want to return to the series’ roots, namely by having more grounded, permanent stakes behind the violence that erupts around Freeland. Black Lightning seemed to respond to its invitation into the Arrowverse with an especially hard turn into comic book territory last season, a turn that ended up being a bit of a whiff for the show, at least until it made the shocking decision to kill off Bill Henderson during the Season Three finale. That unexpected turn has continued to have major consequences for Jefferson and his family, particularly as Jefferson now finds himself spinning even further out of control. 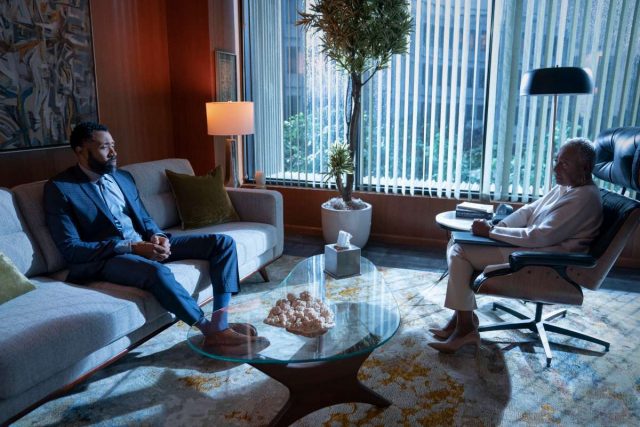 That said, I still struggle to believe that Jefferson would be so incredibly reckless with his secret identity at this point. Tobias even points out that Jefferson is making bad decisions during a pretty cool tease early in this episode, one that marks the first time that Tobias has taunted Black Lightning out of costume during this season. Even with Tobias acknowledging Jefferson’s increasing disregard for wearing his super suit though, it doesn’t make Jefferson’s behaviour any easier to believe, nor true to his established character. On the bright side though, Tobias continuing to bide his time while The 100 and the Kobra Cartel tear up the streets of Freeland remains very nicely ominous, especially when Tobias buys up eighteen blocks of destroyed neighbourhood, only to refuse to develop on it. Clearly, Tobias is planning a massive final strike against the Pierce family, and likely Freeland in general, and the buildup to said final strike has so far been pretty great.

Gambi also continues to excel as one of Black Lightning’s better characters at this point, as he takes it upon himself to further investigate Monovista International. After Gambi figures out that the Freeland PD are bringing in further-enhanced weapons to battle against metahumans on the streets, weapons that Lala at least is eager to seize for The 100 in the weeks ahead, Gambi even takes a job at R&D for Monovista, further spurred on by his old flame. The show is doing a pretty good job at keeping viewers guessing as to Gambi’s true agenda. Is he truly preparing for retirement? Or is this just Gambi’s latest ingenious ploy to infiltrate an operation, and dismantle it from the inside? Either way, Gambi’s ultimate fate is so far even more interesting than that of the Pierce family, despite the fact that the Pierce’s probably have the best chance of showing up in the Arrowverse again in the future, after Black Lightning has concluded. 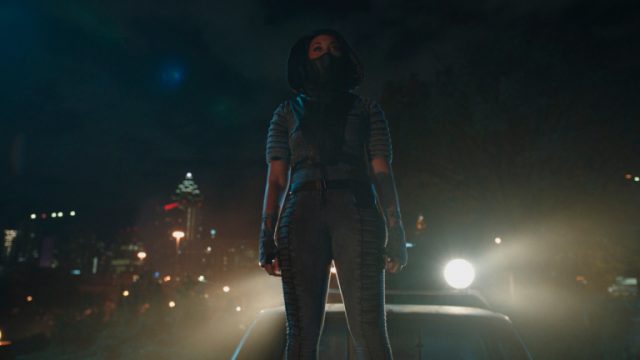 As much as some of this season’s early drama still works well though, the show still can’t quite seem to figure out how to position Anissa and Jennifer especially. Lynn’s former drug addiction evolving into a metahuman power addiction works well, especially when Lynn is forced to reckon with her therapist that she has no friends, and can only meddle in her daughters’ affairs, despite their protests that she’s an untrained liability in the field. The thing is, they’re not wrong. Anissa in particular seems to have a point here, because, somehow, Anissa is able to grab both Lala and Destiny, the underboss of the Kobra Cartel (Lady Eve is apparently MIA at this point), late in this episode, and force them to agree to a cease-fire for a homeless lot! Okay, that’s cool and all, but how the hell does Anissa have the kind of influence and mad skills to grab both warring gang leaders in Freeland, like it’s no big deal?! Not only is this hard to believe, but it deflates both The 100 and the Kobra Cartel as credible threats, if their leadership is this unrealistically vulnerable!

Likewise, the storytelling hasn’t currently found an effective use for Jefferson and Jennifer most notably going off the deep end at this point. Jennifer taking out an entire street of gangsters, only to fail to save a child of Jefferson’s colleague, works fairly well at least, especially when said colleague subsequently loses his surviving children to Child Services, and finds himself with no place to live after the ASA/Markovia war massively jacked up the rent in Freeland. Once again, this is a good return to Black Lightning’s more grounded stakes, where its lead superheroes’ actions have much more heart-wrenching and visible consequences for themselves, and the population of the city that they protect. Still, not even Jefferson once again crippling a gangbanger completely seals this impact for the Pierce’s. I like the idea of Jefferson facing his darkest side before Black Lightning concludes, especially when it calls back to Oliver Queen’s earliest superhero struggles on Arrow, but it would be ideal if the writing could find a more realistic and believable way for Jefferson to do that, rather than running around unmasked and unprotected like a moron.

Finally, on the note of drama that doesn’t land, Anissa also sees that Grace has somehow shapeshifted during her coma, and just… Leaves her, despite the fact that Grace seems to be awake as a leopard?! Uh, isn’t this supposed to be your wife, or at the very least, your fiancee, Anissa?! It’s impossible to believe that Anissa would just abandon Grace in favour of running off with some handsome new doctor, Darius Morgan, even for merely platonic drinks! Sure, I like the idea of Anissa making a new friend, but said friend coming at Grace’s expense still stretches the realm of dramatic credibility too much. “The Book of Reconstruction: Chapter Two: Unacceptable Losses” at least continues to develop a better sense of stakes for Black Lightning, especially after the more fantastical conflict of last season, but the show still can’t figure out how to prime the Pierce family for a fitting send-off. At this rate, it seems like the villains and the supporting cast may have a more impactful exit than the Pierce’s ultimately will! Hopefully, Black Lightning can fix that before its final run of episodes is complete.