As fans of different entertainment mediums, we’re always looking for the next new, unique and tough to put down thing, be it a book, a movie, a TV show or a video game. This can sometimes be difficult given the sheer amount of things that are released each week, and is especially difficult in the horror genre where trends and retreads are common. Then again, it’s likely difficult to come up with something highly original after all these years, although some are able to do it.

Take, for instance, the new novel Thirteen Storeys by Jonathan Sims. I was lucky enough to score a review copy of this book, after having trouble finding it in my home country, and am glad that I did. It was really good, and is something that I won’t soon forget.

What makes Thirteen Storeys stand out? Well, it’s the way the book is set up and written. You see, while it’s essentially a short story collection, all of those stories feed into the same narrative. That is, the story of a potentially haunted apartment building in London. One that goes by the name of Banyan Court, and was built by a reclusive and strange billionaire named Tobias Fell. Hell, he actually lives in the penthouse on the nice side of the building, although nobody ever sees him. 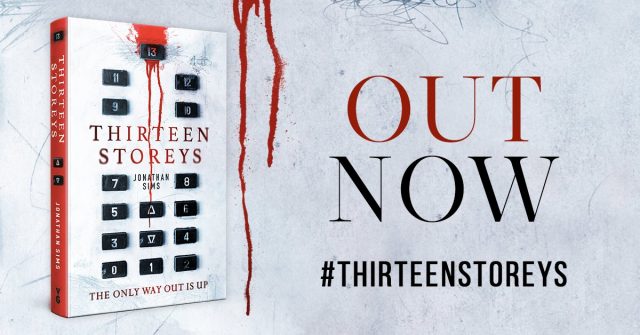 It’s important to note that this isn’t just some regular apartment building. No, Banyan Court was not only built on a historic site, where there was once a catastrophic event; it also uses bricks from the old building(s) that stood there, on that street in a shabby part of the city. It’s also split into two different parts: one for the rich, with its beautiful architecture and modern materials, and a much cheaper and more dreary side for the less well off. This presents an interesting dynamic, as you can surely guess.

The idea behind Mr. Sims’ debut novel is that something simply isn’t right in Banyan Court, and multiple residents have noticed it. They’ve all seen and experienced different things, though, be it shadows, strange stains, walls that always measure differently or people who shouldn’t exist. We discover these things through their own personal stories, which comprise the first twelve chapters of this novel. That’s where the short story feel comes into play, because each one is its own narrative that centres upon a different resident of the two slightly connected buildings. What’s neat is that stories cross over and feature cameos by other residents from earlier chapters. As such, it’s important to read everything in order, from front to back.

Things begin with Tobias’ death, which is puzzling because there’s no blood or evidence to be found in his penthouse, wherein he was entertaining numerous guests during an out of character dinner party. In fact, the eclectic mix of guests happens to be made up of people featured in the twelve stories; all of whom received invitations in peculiar ways.

It’s hard to really go into too much detail, because it’d be so easy to spoil this book for those with interest. I will, however, say that, while some of the stories were better than others, I didn’t find any of them to be bad. In fact, I looked forward to each and every one, and found this thing hard to put down. I was so interested in finding out how it ended that I powered through the last half in less time than normal. 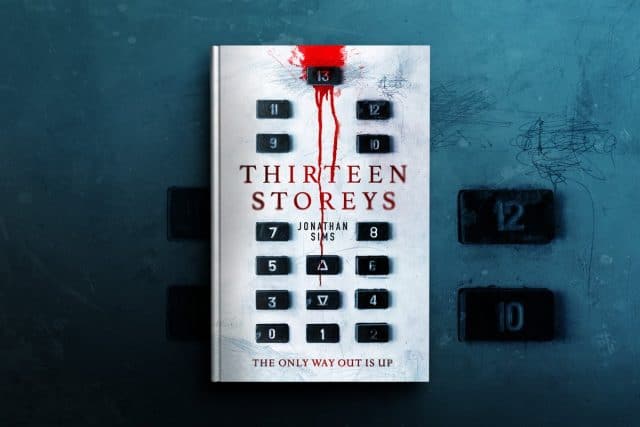 Going in, I wasn’t sure of what to expect from Thirteen Storeys. I hadn’t heard of Jonathan Sims before, nor had I heard a lot about his book outside of a post or two on Reddit. However, when I looked it up I couldn’t help but become incredibly intrigued. Thankfully its UK publisher was nice enough to send me a beautiful hard cover copy, which I expect I’ll read again, because I simply liked it so much. I’ve put it away somewhere safe to keep it pristine and collect, along with my other good books.

Jonathan Sims’ writing isn’t the best I’ve ever read, but I never expected it to be. I was, however, surprised by some of the errors that got through the proofreading phase. There were times where Banyan Court was called other things, like Banyan Place, and there were some other errors that stood out. Shit happens, though, and I’m not going to hold that against the book or its author, nor am I going to pretend that such things have never happened to me. Not that I’ve ever written a book, let alone one this good. For the most part, though, its sentence structure and grammar are pretty good, and it’s hard to stop reading.

At the end of the day, Thirteen Storeys is one of the easiest recommendations I’ve ever had the pleasure of making. It may not be a mainstream book, or something you’ll be able to find easily, but it’s well worth seeking out. This is one of the more interesting, unique and memorable horror books I’ve ever read, and while it’s not the most scary thing out there, it sure is interesting. It had no problems sinking its hooks into me, and I couldn’t wait to reach the decent conclusion.

Don’t sleep on this one if you have the chance to read it.