There’s just no easy way for Batwoman to crawl out of the hole it’s currently found itself in. The series is neck-deep in a very frustrating, sloppily-realized Coryana storyline, one that solely exists so we can explain away what happened to original Batwoman, Kate Kane, in excruciating detail. “Survived Much Worse” could mercifully mark the end of Batwoman’s Coryana arc at least, right as the show prepares to reach Season 2’s halfway point next week, but that still means slogging through another week of contrivances and false tension for now, as well as the series inexplicably ruining Alice’s character by making her a total victim of Safiyah’s mental trickery.

A major problem with the Coryana storyline is that it’s fundamentally built on false tension. It’s quickly made obvious that Kate is not on Coryana, so inevitably, Safiyah is going to trick Alice, along with the heroes that are stupid enough to follow her to Safiyah’s hidden island. Not only that, but Ryan obviously won’t die of her Kryptonite poisoning, because then Batwoman wouldn’t have a lead character once again. So, the only option left for Batwoman is to lean into the ludicrousness of the Coryana storyline, and play it up, which is perhaps the most ideal of many bad options. “Survived Much Worse” seems to employ this strategy to a reasonable degree, but it also continues Batwoman’s issues with not being able to deliver a consistent character for Ryan, nor a consistent tone behind events on the series.

When this episode leans into its cringeworthy writing, it actually kind of works to some extent, surprisingly. Maybe my brain has just flipped the shit switch, as some sort of twisted coping mechanism for Batwoman’s reliably terrible writing, but at least I didn’t find myself quite as infuriated by this episode as I was at last week’s episode. This is because Batwoman is at least trying to have a sense of humour about the hole that Ruby Rose’s abrupt exit dug the series into, at least for now. Many of the plot twists on and around Coryana feel almost intentionally outlandish, and the resolution to Alice’s hunt for Kate, Alice’s affair with Ocean, and Ryan trying to find some Desert Rose in order to cure herself of Kryptonite poisoning, are all proudly ridiculous to the point of meriting some begrudging respect from me.

Of course, this still doesn’t change the fact that this week marks another bad episode of Batwoman. It’s just more amusingly bad than frustratingly bad in this case. Twists like Ryan being forced to perform a HALO jump onto Coryana, while not even knowing what a HALO jump is, are preposterous to the point of being genuinely amusing, as is Safiyah somehow contriving a ludicrous plan to force Alice to kill Ocean, only, she wouldn’t have known to do this if Ryan didn’t point out that the body Alice supplied to Safiyah is a fake, which in turn depends on Ryan contriving a way to follow Alice to Coryana and subsequently get captured in the first place. Yeah, the writers have really thrown up their hands at this point. Who can blame them though? There was no way that Batwoman could provide a meaningful, effective solution to Ruby Rose’s sudden exit while also resolving the show’s Coryana/Desert Rose storyline in a believable fashion. The attempt we got was doomed to be unsatisfying and unrealistic, since you can’t bring Ruby Rose back, which ultimately ends up wasting time in a season that clearly didn’t have enough good ideas to adequately stretch itself to its 18-episode order. 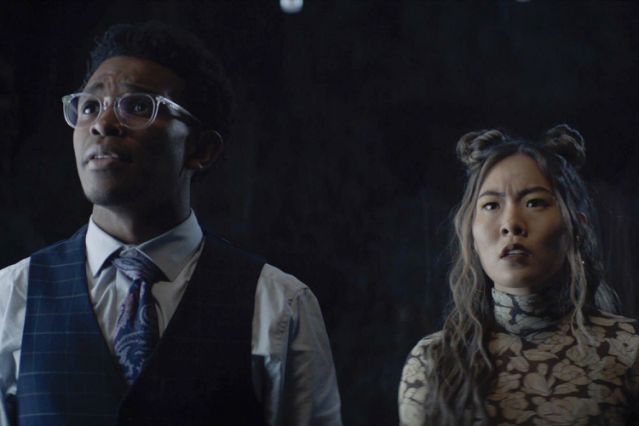 If it seems like the story of this episode is a complete mess from my recounting, well, that’s because it is. Sophie and Jacob also end up stranded on Coryana for literally no reason (it’s hand-waved away by Alice wanting an audience while she kills Kate, but that’s a stupid excuse to put these characters on the island), and this only occurs so that Ryan has an easy escape route, after she’s quickly captured and made to do nothing in this episode. Well, almost nothing. In fairness, Ryan does give Alice a pep talk (take a shot), wherein she encourages Alice to realize that she doesn’t actually want to kill Kate, but merely misses her sister. Sadly, with Ryan’s own treachery outing Alice’s ruse with the fake Ocean body around the same time (that feels a little inconsistent for Ryan’s character, yet again), Safiyah forces Alice to choose between Ocean and Kate, only for Alice to inevitably choose Kate. Thus, she stabs the real Ocean, who was unrealistically grabbed from his getaway (in the span of a few hours? How?!), only to be oblivious to the fact that the knife Safiyah handed her is imbued with Desert Rose powers, so it immediately resurrects the person that was stabbed when the knife is removed from their body. Sure, who even cares anymore?

So, finally, after an agonizingly long selection of Batwoman episodes that drag out a mystery with a seemingly obvious final result, we finally get some resolutions for Kate’s disappearance, and for the current agenda of Safiyah. It turns out that Safiyah did not in fact kill Kate, but was framed by Tatiana, who wanted Safiyah to remove her toxic feelings for Alice by bringing Alice back to Coryana, and then…? What? Tatiana orchestrating a plot on this scale makes no sense at all to begin with, and not only that, her reasoning is idiotic to the point of seeming outright incomplete! Safiyah tries to respond to this by making a big show about not allowing her emotions to sway her, but that’s literally all she’s done as a character on this show so far! In that case, it pretty much tracks that Safiyah’s main lieutenant would be just as shallow, immature and unrealistically resourceful as Safiyah herself is!

As for what happens with the hunt for Kate, well, it reaches an equally unsatisfying conclusion, though like I said, this plot really could have only ended one way from Coryana’s perspective. After Mary takes out a Many Arms of Death agent with a glass ornament (is it just me, or are the Many Arms of Death a really terrible assassin group in the Arrowverse?), one that’s fully killed by Julia soon afterward (I have to admit that Mary and Luke’s encounter with this assassin was weirdly funny thanks to this flourish, especially when they try to protect Ryan’s prized plant all the while!), Julia finally delivers the news we all knew was coming; Body parts were found off the coast of Bludhaven, and their DNA was positively ID’d as Kate’s. This seemingly confirms that Kate is dead, thus resolving this mystery for all involved, just in time for Ryan to lay dying while Alice burns Coryana’s entire crop of Desert Roses in a fit of rage.

Okay, credit where it’s due, the twist with Alice burning Coryana’s entire supply of Desert Roses is pretty good, especially since it mercifully eliminates an increasingly stubborn Deus Ex Machina that Batwoman has been leaning on too much lately. Unfortunately, this twist is also somewhat undermined by a piece of Desert Rose being with Mary and Luke in Gotham City the whole time, meaning that Ryan’s entire trip to Coryana, along with Sophie’s and Jacob’s trip there, was completely, utterly, agonizingly pointless! Still, what can you really expect? “Survived Much Worse” once again feels like a strangely fitting title for the current state of Batwoman episodes. It’s full of ludicrous twists, unsatisfying payoffs, and is fundamentally built around the losing battle of resolving Kate’s sudden disappearance. Still, the show has indeed weathered worse episodes, as well as worse twists, amazingly. Batwoman is still easily the worst Arrowverse show overall at this point, bar none, but it does seem to have a weird habit of deftly defying its own awfulness, and staying somewhat in The CW’s spotlighted programming, even if it sometimes just replaces old awfulness with new awfulness each week.

Oh, and the final insult to top this latest episode off? Kate is still alive after all, stashed in Gotham’s sewers, with a face full of bandages that will no doubt explain her inevitable recasting in the immediate future. So, speaking of pointless trips for Ryan, if Batwoman was going to capitulate to recasting its former lead character in the end, then why didn’t the series just swallow its pride and do that to begin with?! I don’t know anymore, and at this point, I feel so overwhelmed by bad writing that I don’t care anymore. Just, please, Batwoman, can we finally move on from this increasingly terrible Coryana storyline and go back to hopefully better story arcs, like the fact that the False Face Society is still running around Gotham completely unchecked?!

Batwoman 2.8: "Survived Much Worse" Review
Batwoman continues to flounder with its terrible Coryana arc this week, though it at least tries to have some fun with a series of ridiculous resolutions that were never going to be satisfying.
THE GOOD STUFF
THE NOT-SO-GOOD STUFF
2021-03-22
57%Overall Score
Reader Rating: (0 Votes)
0%