You know, every so often, The Walking Dead still manages to surprise me. I don’t think it’s controversial to say that AMC’s shared post-apocalyptic television universe is a bit old hat by this point, rapidly running out of comic book storylines for its flagship series to adapt, while heavily botching its newest spin-off. Considering that the world’s overall love affair with zombies has been over for years to boot, I’m a little surprised that AMC hasn’t started to look toward another blockbuster brand through which to prop up their network and fledgling streaming presence. For now though, “Splinter” nonetheless manages to prove that The Walking Dead’s TV universe can still turn out a real gem of an episode every so often!

This episode revolves entirely around the perspective of new recruit, Juanita “Princess” Sanchez, who stumbled into the company of Eugene, Ezekiel and Yumiko during their trek to meet up with the mysterious Stephanie. With these four survivors now being apprehended by a group of mysterious white ‘stormtrooper’ characters at the climax of their mission, an event that was originally planned to be the cliffhanger conclusion of Season 10, Princess initially resists, only to watch Yumiko get hit in the head. Overwhelmed with concern, Princess impotently calls out for Yumiko after she’s tossed in a nearby train car, with Yumiko just so happening to be imprisoned in an adjacent train car. As a way of distracting an injured Yumiko, Princess then begins to recount a story about her abusive family, before Yumiko passes out, and Princess loses track of the message she was trying to share.

This is the first step in what’s admittedly a pretty stellar, memorable exploration of a new key character. At the same time, this episode also begins foreshadowing the inevitable coming of the Commonwealth, the last major threat to Alexandria and the other survivors from The Walking Dead’s source comics, and in turn the basis for this show’s upcoming eleventh and final season. It’s pretty clear to anyone familiar with the ultimate climax of the foundational Walking Dead comic books that the mysterious stormtroopers that have captured Princess and her new friends are agents of the Commonwealth, a vast, morally complex network of survivors and survivor communities that’s hyper-advanced, and predictably ruthless in the upper classes’ societal upkeep!

Yes, the Commonwealth is a literal society of survivors, which serves to demonstrate the scale of the coming climactic conflict for this entire show! In any case, after being cautioned by Yumiko not to give any information to the stormtroopers, Princess holds fast during a subsequent interrogation, only to be knocked out and sent back to her prison. After she then manages to sneak out to Eugene, she’s informed that she needs to cooperate, and not try to free her new allies. Resigned, Princess returns to her original prison, only to be met by Ezekiel!… But wait, didn’t Eugene tell Princess to stay put and not intervene in the capture?

Something clearly isn’t right here. That becomes even more apparent when Ezekiel, rather out-of-character, attacks and tries to intimidate one of the stormtroopers, only for Princess to protest. When the rookie stormtrooper is uncooperative, Ezekiel then savagely beats the soldier amid Princess’ cries to stop, only for the image to get blurry. When the blur subsides, it’s actually Princess that’s covered in the soldier’s blood, with Ezekiel nowhere to be seen! This is the point when the pieces of this storyline begin to come together, and the explanation feels strangely inevitable for a character like Princess– She’s been hallucinating all of these interactions with the other survivors, ultimately leading to a very real breakdown that saw her savagely attack a rookie stormtrooper that was just trying to get her to cooperate! 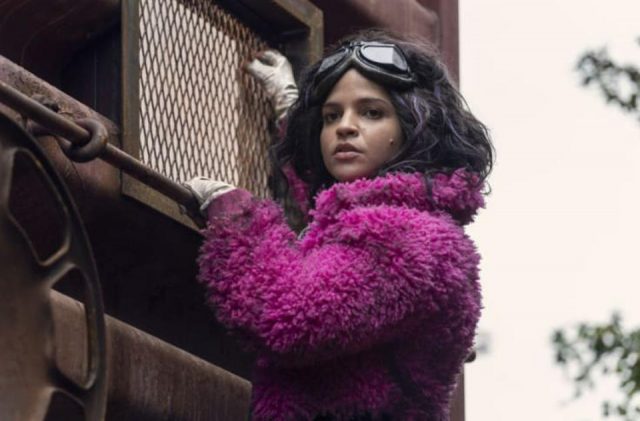 This is a brilliant twist, because it’s very shocking in its execution, but also makes a lot of sense in hindsight, even when divorcing Princess’ inspiration from the Walking Dead comic books. Princess has not only been entirely on her own for many, many years, possibly since shortly after the walker apocalypse began, but was also a victim of an abusive household even before the walker apocalypse happened! She’s a child of trauma, trauma that’s simultaneously hardened Princess while also loosening her grip on reality. This in turn explains why Princess did seemingly deranged things like leading the other survivors through a minefield, or intentionally leading them in circles so that she could talk to them longer. That latter point is especially crucial, because it indirectly implies that this entire mess with the stormtroopers could more or less be Princess’ fault, assuming that Stephanie isn’t among them, and this wasn’t a sting operation from the beginning.

This brings me to the best element of this superb episode of The Walking Dead; A surprisingly earnest perspective on mental illness. Considering how unhinged, violent and sociopathic the world of The Walking Dead has become after a whole decade since the walker apocalypse began, it’s kind of surprising that the series hasn’t touched on the issue of people that were already mentally unsound suddenly having to thrive in a world where insanity and an abandonment of society’s former principles is the new normal. In a strange way, Princess was built to thrive during the walker apocalypse, not even needing friends to make it happen! Clearly though, this life is not healthy nor fulfilling, and this explains why Princess struggles with the logic of abandoning her new friends, and the realization that she doesn’t want to go on without them. It’s all fantastic character work, and it leads to quite possibly one of the best episodes that The Walking Dead has delivered during the entirety of this retroactively extended season!

Better still is that the stormtroopers and their inevitable affiliation with the Commonwealth are also effectively left up to viewers’ imaginations so far. The stormtroopers are diplomatic, intelligent and seemingly forthcoming, but there are definite hints that the rules they follow, while outwardly simple, are ruthless, and carry potentially deadly consequences if they’re even disobeyed in passing. “Splinter” thus succeeds wonderfully at both foreshadowing the final major threat of The Walking Dead, while also giving us a pitch-perfect showcase of the tragic backstory and memorable psychology driving Princess. What’s especially crazy about this surprising high point for Season 10’s narrative is that this bonus episode of The Walking Dead wasn’t originally supposed to exist either, before production shutdowns caused by the ongoing COVID-19 pandemic motivated AMC to retroactively extend The Walking Dead’s tenth season with six additional episodes, including this one!

This seems to be it for this season’s Commonwealth teases, sadly, considering that the final two bonus episodes for Season 10 are set to deal with other survivors outside of Eugene’s and Princess’ group. Still, it definitely feels like The Walking Dead is primed to kick off its grand climax on the right note so far, and I’m very much looking forward to seeing how Alexandria and other familiar factions will go on to interact with a whole new world that dwarfs all of them in comparison!

The Walking Dead 10.20: "Splinter" Review
The Walking Dead delivers by far its best bonus episode yet this week, as Princess faces both personal demons and mysterious captors while trying to free her new friends.
THE GOOD STUFF
2021-03-23
95%Overall Score
Reader Rating: (0 Votes)
0%