NOTE: Full spoilers for this episode of, “The Falcon and the Winter Soldier” are present in this review

The Falcon and the Winter Soldier has done a pretty solid job of returning the Marvel Cinematic Universe to a place of stark, surprisingly sobering realism, even if it is nonetheless framed through the fantastical, universe-altering event of The Blip. Despite all of the series’ great ideas however, the tone still hadn’t been completely nailed down with its debut, leading to some slightly inconsistent narratives in the first two episodes, which could sometimes range wildly between harsh political commentary and silly buddy humour, sometimes between scenes! Finally though, “Power Broker” does away with those growing pains, delivering by far The Falcon and the Winter Soldier’s best episode yet, and one that finally fully balances the show’s desire to examine its themes on a global scale, while also maintaining a more organic sense of humour and excitement.

It perhaps also helps that this episode delivers a fully complete ensemble for the heroes as well, who are forced to break Helmut Zemo, the main antagonist of 2016’s Captain America: Civil War, and one that almost single-handedly tore the Avengers apart, out of prison. Marvel fans who were a bit upset about Captain America: Civil War heavily altering Zemo’s character from his Marvel Comics inspiration will also be pleased to know that The Falcon and the Winter Soldier delivers a more fun and comic-faithful take on Daniel Bruhl’s Sokovian radical. It turns out that Zemo was a baron the whole time, most notably, which finally appropriately grants him his comic book moniker, “Baron Zemo” in the MCU. This identity also adds some more welcome context for why Zemo was so heavily radicalized against the Avengers, since Zemo lost much of his fortune after Ultron’s attack on Sokovia during the climax of 2015’s Avengers: Age of Ultron, plus it better justifies the truly ridiculous amount of money and resources that Zemo had to employ in order to mount his psychological offensive on the Avengers in the first place!

So, despite Sam’s protests, Zemo comes along to follow the next lead on the Flag-Smashers, which just so happens to bring Sam and Bucky to a crucial, very exciting spot that X-Men fans in particular are going to be stoked about– Madripoor! Madripoor is a fictional island nation in the Marvel Universe that’s heavily affiliated with the X-Men, Wolverine in particular, being an Asian economic hotspot near Indonesia and Singapore. In fact, Wolverine first met Captain America on Madripoor during WWII in Marvel Comics lore, with Madripoor going on to become both Logan’s favourite drinking spot (Wolverine’s favourite bar, the Princess Bar, is even glimpsed in the background of this episode!), and a black market community that he occasionally defends as an independent vigilante, going under the alias, “Patch.” Because he wears an eyepatch, for some reason.

The introduction of Madripoor in the MCU is already incredibly exciting for Marvel fans (especially when Zemo’s occupied home country from Marvel Comics lore, Bagalia could have easily served the same purpose for this storyline!), since it appears to be Marvel Studios’ latest addition of a recognizable piece of Marvel Comics lore that was formerly owned by Fox, a la WandaVision’s inclusion of S.W.O.R.D., and was thus formerly off-limits to the MCU pre-Disney-Fox merger. Even better however is how brilliantly Madripoor is used to deliver an episode that presents tight, non-stop thrills for its entire duration. After Zemo suggests meeting a fence in Madripoor’s, “Lowtown”, the lawless, crime-choked part of Madripoor that serves as a haven for black marketers and traffickers of all stripes, Sam must pose as another obscure, but recognizable Marvel Comics character, Conrad Mack, a.k.a. Smiling Tiger, while Bucky causes trouble at another bar, appearing to the outlaws of Lowtown to once again be a puppet of Zemo. This sets off a series of events that keeps everything moving at a brisk pace throughout this episode, with all eyes in Lowtown now being on Zemo’s increasingly suspicious group.

It should come as no surprise then that the meeting with Zemo’s fence goes badly, with the fence being shot and killed after an ill-timed phone call from Sarah outs Sam as an imposter, right before a bounty is sent to everyone in Lowtown that targets Sam, Bucky and Zemo! This ratchets the action up even further, while also giving Sam, Bucky and Zemo a chance to meet their mysterious saviour– Sharon Carter! It’s about time that the former Agent 13 finally made an appearance on this series, and, much like Zemo, Sharon has gotten a considerable character upgrade on The Falcon and the Winter Soldier! Now forced to live on the run for at least two years (Avengers: Endgame formerly claimed that Sharon was among the ‘Vanished’ killed by Thanos’ Snap, but it’s also possible that she’s merely been off the grid since 2016), Sharon has since gone on to embrace the life of a smuggler and an outlaw in Madripoor, packing far more brutal and deadly fighting techniques, and far less scruples about how and why she does anything in general!

On top of that, Sharon’s new lifestyle appears to be doing a lot of good for her as well, at least financially! Despite the fact that Sharon has been permanently cut off from her friends, family and any connection to her life in the U.S., she nonetheless lives large in Hightown, possessing a huge collection of stolen art, and even throwing some of the best parties in Madripoor. An angrier, less noble Sharon turned out to be exactly what her character needed to better stand out in the MCU too, especially considering how well she blends with The Falcon and the Winter Soldier’s core themes of idealism and disillusionment. Sharon does however agree to go as far as helping Sam, Bucky and Zemo meet up with another Madripoor contact, Dr. Wilfred Nagel, who appears to be the man responsible for the replicated super-soldier serum that was made for the Power Broker, and subsequently stolen by Karli and the Flag-Smashers. 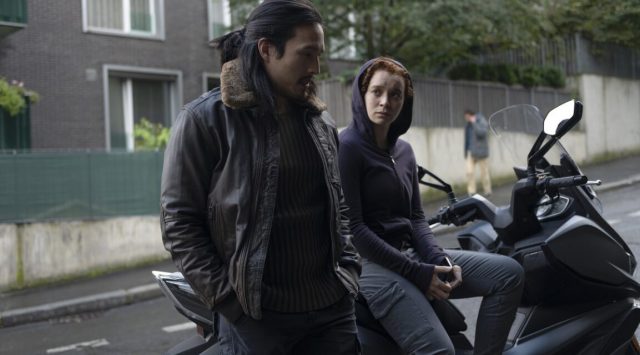 If you were worried about an indefinite supply of super-soldiers preparing to flood the MCU however, then rest assured that the Power Broker is about to hit a hell of a business snag. After Sharon finds herself struggling to single-handedly repel the bounty hunters targeting her friends, Zemo ultimately kills Nagel, before causing enough damage to obliterate Nagel’s entire laboratory! He even does so while wearing his iconic Marvel Comics mask, further moving Zemo towards his inspiration from the printed panels! Despite the trouble however, Zemo does help Sam and Bucky get away, though Sharon ultimately declines to leave Madripoor, declaring again that she’s not welcome in the U.S. Sam insists that he’ll get Sharon a pardon however, which perhaps unfortunately marks the end of Sharon’s time on this series, or so it would appear for the time being. Bummer. I really like this darker, edgier take on Sharon’s character, particularly when it makes so much sense regarding the sheer amount of bad hands she’s been dealt ever since she contributed to the destruction of Project Insight during the fall of S.H.I.E.L.D. in 2014’s Captain America: The Winter Soldier.

Even after fleeing Madripoor, albeit with another promising lead on Karli, the heroes’ troubles aren’t quite over either. Upon investigating a new lead in Latvia, Bucky recognizes a mysterious bit of tech in the street, and follows it into an alley to meet Ayo, one of the Dora Milaje of Wakanda! Unsurprisingly, Ayo is after Zemo, no doubt wanting to capture him so he can face justice in Wakanda over the UN bombing that took the life of Wakanda’s former king, T’Chaka during the events of Captain America: Civil War. This completes a slew of exciting teases for the future of The Falcon and the Winter Soldier, and the MCU at large, between Wakanda unexpectedly coming back into the picture to target Zemo, Sam’s cover identity foreshadowing another recognizable Marvel Comics criminal, “Baron” Zemo moving a lot closer to his original inspiration from Marvel Comics lore, and, most of all, the introduction of Madripoor providing our biggest tease yet regarding how the X-Men, and mutants in general, will eventually make their way into the MCU, in hopefully the not-too-distant future! 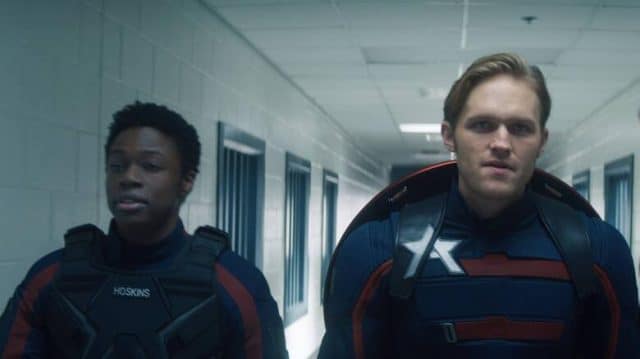 Walker, Hoskins and Karli may have had little to do this week by comparison, outside of spinning their wheels, and, in Karli’s case, weeping over a dead relative that succumbed to disease from an over-populated, post-Blip refugee camp, but this didn’t matter much in the end, because the rest of this episode’s action-packed narrative was so fantastic! Even the show’s humour feels a lot more balanced and natural in this case, complete with finally providing a more light-hearted, comic-accurate take on the MCU’s Zemo, while Sam’s and Bucky’s rapport finally begins to flow more naturally amid the crime-infested ‘Lowtown’ of Madripoor. There’s just nothing to truly complain about in the sublime, “Power Broker”, even when the MCU’s version of the eponymous character still hasn’t appeared in the flesh yet. This episode represents The Falcon and the Winter Soldier firing on all cylinders, presenting a highly rewarding narrative for Marvel fans, a ton of great action on its own merits, and lots of exciting character work that furthers the dramatic themes, this time without tripping up the buddy-style humour shared between Sam and Bucky, and now Zemo.

Even in the final seconds, the storytelling continues to build momentum here as well, promising a big confrontation between Zemo and the forces of Wakanda next week. Yet another wild card has been brilliantly thrown into an increasingly complex conflict, and all before we’ve even properly learned who’s been selling Captain America’s secret sauce to anyone rich or crazy enough to proudly abuse it!