After being thrown for one hell of a loop by production complications caused by the ongoing COVID-19 pandemic, The Walking Dead’s extended tenth season finally comes to an end this week, with an episode that many fans have been anticipating for quite a long time. “Here’s Negan” aspires to adapt the fan-favourite comic book of the same name, which pulled back the veil on the arch-villain-turned-antihero’s backstory within the universe of the Walking Dead comic books. The Walking Dead’s Season 10 finale naturally aspires to achieve the same objective for AMC’s Walking Dead TV universe, bringing in Jeffrey Dean Morgan’s real-life wife, Hilarie Burton Morgan to portray Negan’s better half, Lucille in flashback, the tragic former Savior leader’s late wife, and deadly baseball bat inspiration.

Negan’s evolution as a character has been awe-inspiring and highly rewarding since his brutal, vicious introduction to The Walking Dead at the very end of Season 6. Even then however, this key antagonist’s backstory remained mostly an unknown in the TV canon, despite Negan gradually opening up to some personalities like Judith and Gabriel during his time as a prisoner in Alexandria. Despite some of the goodwill that Negan has earned in Alexandria over the past couple of seasons as well, Carol eventually informs him that Alexandria’s council has voted to banish him from the community upon Maggie’s return, resulting in Carol separating Negan into another lonely existence within a cabin, where he can be far removed from the likes of Maggie and Hershel. 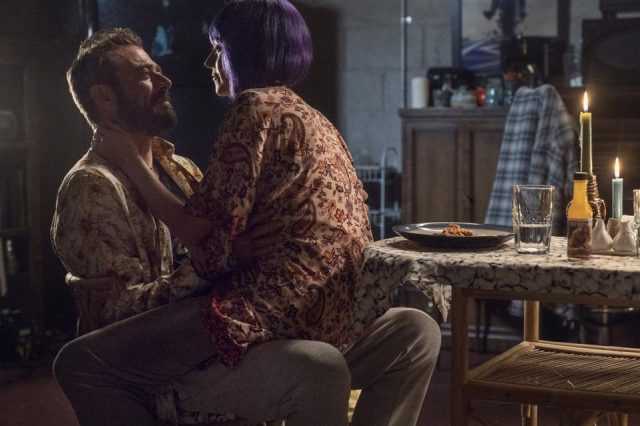 Left alone with his thoughts, Negan is eventually tormented by his dark legacy, something that eventually spurs him to dig up his buried bat, which was presumably hidden near the tree where Negan lost the war against Alexandria and the other survivors by Rick, following the Season 8 finale. This in turn leads to Negan reflecting on the earliest days of the walker apocalypse, which the show has now explicitly confirmed took place twelve years ago at this point in the Walking Dead’s TV universe timeline. That’s a long time for Negan to evolve and develop, and as it turns out, he had very different beginnings in a pre-apocalypse world, starting out as a devoted husband who was a little stunted and immature, but otherwise meant well during his day-to-day existence with his wife, Lucille.

This is eventually explored through a series of flashbacks, which are recounted by Negan within another flashback, when he has to appeal to some gang members for possession of chemotherapy treatments for his cancer-stricken wife. This disjointed style is intentionally messy, playing into Negan’s love of talking and distraction, though it’s nonetheless true that the flashbacks within flashbacks don’t exactly present the cleanest method of divulging facts about who Negan was before the walker apocalypse, and who he grew into during his tragic post-apocalyptic origin. This likely won’t be much bother for fans though, who are no doubt used to Negan as a rambling, directionless narrator of events by this point. Regardless, the charming chemistry between a less tough, less assured Negan and his stronger, more determined wife, Lucille, whom Negan is struggling to keep alive with whatever chemotherapy treatments he can scrounge up, effortlessly carries this episode with aplomb, something that’s no doubt helped by the fact that the actors playing this star-crossed couple are married in real life. 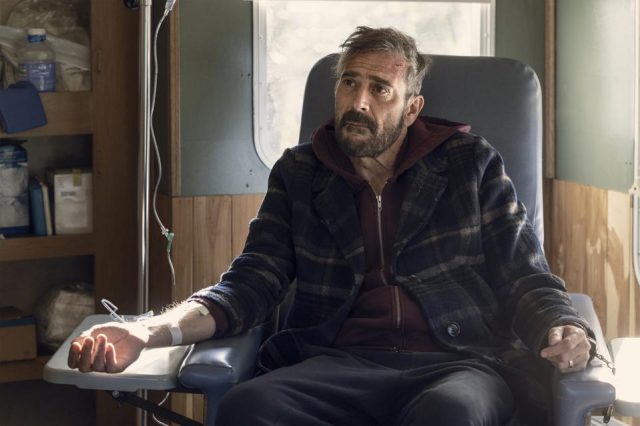 Some of Negan’s early, pre-apocalypse flaws are quite shocking as well, particularly the fact that he was seen as a bit of a loser that struggled to hold down a job, and even had an affair at one point! When framed in the context of who Negan eventually became as the leader of the Saviors though, these revelations make an astonishing degree of sense. Even amusing tidbits like Negan using some of his iconic Savior quotes to grief adolescent gamers online, and costing himself a job as a gym teacher (the same pre-apocalypse occupation that Negan held in the source comics) because he assaulted a parent at a bar, while they also frame Negan as a bit of a deadbeat with a loose understanding of consequences, eventually add up to effectively build the character that we were initially introduced to over four years ago. To that end, these reveals also excellently frame just how devoted Negan eventually becomes to Lucille after the walker apocalypse begins, despite Lucille urging Negan to be ready to move on and forge a new path without her in the post-apocalyptic world. Even then, Negan constantly braved walkers, gangs and any number of other hazards in order to keep Lucille alive for as long as he could. It’s surprisingly beautiful, really.

We’ve nonetheless known for years however that Lucille died very early on in the walker apocalypse, and sure enough, the way she goes out is pretty damn tragic. Negan does manage to secure enough chemotherapy to keep Lucille going for a while longer, thanks to a traveling caravan of doctors (which is also how Negan met his fallen former Savior lieutenant, Laura, in fact!), and even seemingly betrays said doctors to escape death at the hands of a roving squad of thugs, but even then, it was all for nothing. Lucille ultimately commits suicide before Negan manages to return with her treatments, leading to a distraught Negan eventually finding himself unable to euthanize her, and instead burning his house down with the re-animated Lucille inside. Negan even takes out the mail box on the way out, which confirms that his surname was, “Smith”, as a bit of added info that wasn’t originally established in the source comics. Yes, believe it or not, “Negan” is not a nickname, and was actually Negan’s legal birth name the whole time. Wow. On that note, the idea of the name, “Negan Smith” sounds almost goofy, which only adds to the empathy that you feel toward a man that formerly felt like an unrepentant bastard when we first met him. 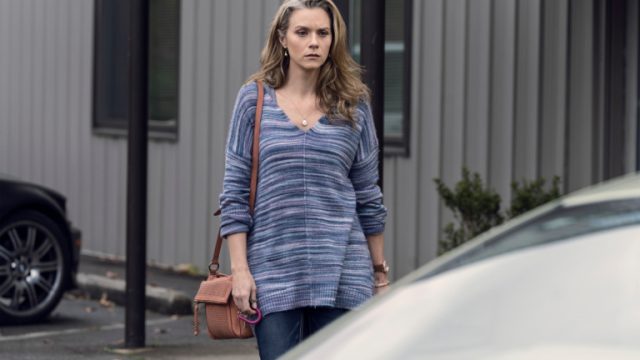 As much as the emotional punch behind this episode is top-notch however, and several of the revelations surrounding Negan’s background and relationship with Lucille are excellent, not every bit of backstory explored in this episode feels like a slam dunk. Those hoping that Negan’s bat had an actual, meaningful connection to his late wife are going to be very disappointed most notably, since the bat is simply handed to Negan by Laura after their initial meeting, and he wraps it in barbed wire later on… Just because. That’s a bit of a missed opportunity. In fact, Negan’s first encounter with Laura in general feels disappointingly lame, especially when we don’t actually see Negan begin to build the early foundation of what would eventually become the Saviors. Laura might as well have not appeared at all. Finally, Negan’s iconic leather jacket also has a bit of an underwhelming explanation, merely amounting to an impulse purchase that Negan made before the walker apocalypse because he was a bit of a man-child. Really? That’s it? This show has been hyping up Negan’s ensemble as being very specific and having a clear-cut connection to his dead wife, but in the end, it doesn’t really signify anything that deep, at least beyond the fact that Negan just wanted to dress the part of a post-apocalyptic badass. Lame!

In the end though, this journey through Negan’s backstory is very much worth it, especially when his bat finally breaks after he takes out one last walker with it in the present, finally allowing Negan to let go of Lucille’s memory, and burn the bat in the cabin. From there, Negan returns to Alexandria, defying Carol’s efforts to shoo him away nicely (predictably, the council didn’t actually approve the banishment of Negan, and Carol took this upon herself), and deciding that he’s ready to face whatever retribution Maggie will eventually bring his way. It’s a strong note to end this episode on, and an equally strong note to end the rather drawn-out Season 10 on, leaving just 24 upcoming episodes of The Walking Dead before the show concludes for good in late 2022.

“Here’s Negan” ended up being another of the best bonus Season 10 episodes that The Walking Dead ultimately delivered, as well as one of the strongest, most heart-wrenching Season 10 episodes in general. Negan’s emotional, highly tragic backstory once again adds some brilliant new layers to his character, wonderfully setting Negan up for even more shocking, emotionally challenging story turns during The Walking Dead’s upcoming eleventh and final season. Negan’s decision to stay in Alexandria and defy exile is bound to have huge consequences, though it could ultimately be Alexandria’s boon as well, once they inevitably come into conflict with the Commonwealth for The Walking Dead’s overall climax. Either way, adapting one of the most famous Walking Dead comic books as a means of closing off the most bizarrely-presented season of The Walking Dead to date feels like a satisfying move, thus rounding off The Walking Dead’s penultimate season on a strong note. I’m not sure where Negan’s character evolution will take him next, but I can definitely guarantee that he won’t be quite the same Negan from the onset of the walker apocalypse, nor the one that brutally murdered Abraham and Glenn so many years ago. This could foreshadow Negan as the wild card that Alexandria needs to prevail against their final threat to come, possibly solidifying for good that Rick’s controversial decision to spare Negan was, against the odds, the right thing to do all along.

The Walking Dead Season 10 Finale: "Here's Negan" Review
The Walking Dead finally concludes its retroactively-extended tenth season by exploring the tragic, complex backstory of Negan this week, and how he ultimately evolved into the unpredictable anti-hero he is now.
THE GOOD STUFF
THE NOT-SO-GOOD STUFF
2021-04-05
88%Overall Score
Reader Rating: (0 Votes)
0%