Hey, CW, you spilt some Legends of Tomorrow onto The Flash this week! Granted, I miss Legends of Tomorrow as much as any other self-respecting Arrowverse follower (just one more month, baby!), but, “The One With the Nineties” nonetheless feels like a bit of a big swing. It focuses pretty much entirely on The Flash’s supporting cast while Barry recovers off-screen from his previous battle with Psych, for starters, and not only that, but it also has a pretty goofy gimmick behind it. As this episode’s title suggests, said gimmick involves at least some of the characters, specifically Cisco and Chester, becoming lost in the 1990’s, after an attempt to track the other Forces predictably goes awry.

Considering how heavy and dramatic the previous introductions to the Strength Force and the Sage Force were on this show however, it was a nice change of pace to enjoy a more light-hearted, semi-goofy storyline through which to introduce our third opposing Force, the Still Force. Yeah, the one that Turtle is supposed to be using, except The Flash has already burned through two separate renditions of Turtle, so it has to contrive another excuse to bring the Still Force into the picture. Also, the Still Force, which is the direct counterpart of the Speed Force in DC Comics lore, one that focuses on entropy and the stopping of time (hence how Turtle’s powers relate to slowing and stopping time through its use in DC’s comics at least), controls all of time in the Arrowverse, apparently. 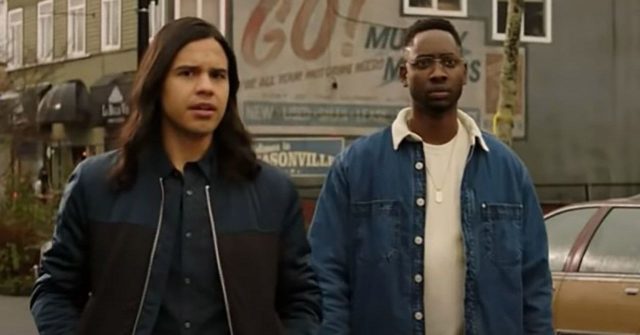 But wait, DC Comics lore already has a time-manipulating force; The Forever Force! Why is The Flash suddenly merging the Still Force and the Forever Force into one combined entity? I suppose it comes down to the fact that the avatar for the Forever Force in DC Comics lore is Hunter Zolomon, Zoom himself, Season 2’s big bad that’s long gone in the Arrowverse. Likewise, Turtle has been well and truly expended on the Arrowverse too, despite being another of the Flash Family’s longest-running foes in the printed panels. Thus, The Flash is simply left to make up a new avatar for the Still Force, which is basically the Forever Force in disguise in this case, and that avatar is Deon, a used car salesman that’s very unhappy with the way his life turned out in the present day.

Before we get to that big revelation however, Cisco and Chester wind up stuck in a time anomaly that drops them back into 1998, and also takes away their phones, despite the fact that it still leaves them with a way to use their fancy S.T.A.R. Labs temporal tracker. Yeah, I don’t get that either. Still, I suppose that the show would have written itself into an impossible obstacle without the use of the tracker, plus this weird plot turn is overall easier to forgive in a storyline that’s obviously supposed to be a little silly. Cisco and Chester wandering through the 90’s is actually quite endearing and fun nonetheless, as they struggle to identify who could be creating the temporal anomalies, only to find a red herring that’s shaken awake by a modern pop culture reference, which resets the 1998 day that Cisco and Chester landed in. Yeah, I don’t know how their little gizmo missed Deon just because he’s peeking out from an adjacent room, but whatever. It’s bullshit S.T.A.R. Labs technology, and we should be used to it just doing whatever the plot needs it to by now. 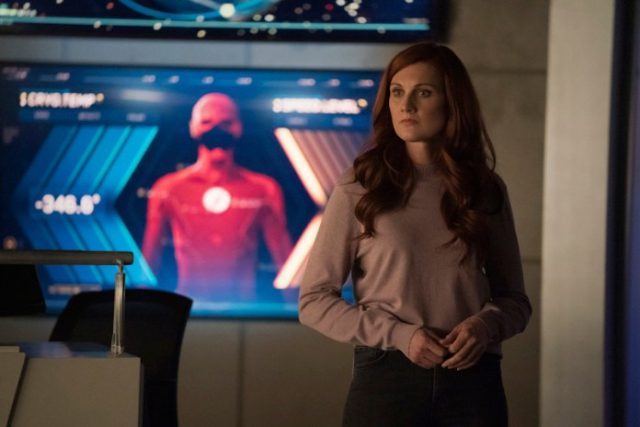 I must also commend this otherwise ridiculous time travel storyline, one that feels like it got ripped right out of a Legends of Tomorrow episode, for presenting a surprisingly effective new development for Chester’s character, beyond his lovable rapport with Cisco. After Cisco notices that Chester digs for parts out of the garbage, the two eventually fail to get a necessary part from an electronics store, which just so happens to be bought by Chester’s father. This comes with the tragic realization that Chester’s father died the following day in 1998, resulting in Chester having to confront his father for the part, as an undercover adult. Rather than Chester’s father being a simple neglectful jerk however, Chester comes to see that his father lost himself in his work as a way of making his son proud, while also intentionally setting up scientific challenges to help increase Chester’s resourcefulness, perception and independence. It’s a little thing, but it goes a long way towards better developing Chester as a character, while also further separating him from the much more established backstory of Cisco.

Of course, it would have been ideal if much of this episode’s climax didn’t feel rushed, due to having to spend so much time building up Deon, before unrealistically pulling Cisco and Chester out of Deon’s time anomaly. Once Deon is unmasked, Chester simply drives him off with a pep talk (take a shot), even if this also comes with the unintended consequence of Deon realizing that he’s not tapping into nearly his full power as the new conduit of the Still Force. This at least banishes a series of anachronisms that formerly dropped into Central City once Deon got upset in 1998 though (seriously, where the hell are the Legends here?!), plus it buys Team Flash some time against what appears to be their most dangerous Force wielder yet. Of course, this Still Force reveal would have been a lot more exciting if Deon wasn’t just some nobody character invented for this show, and actually had a meaningful inspiration from DC Comics lore. You know, like Zoom, or Turtle!

Between Cisco’s and Chester’s misadventures in 1998, a couple of small subplots are also sprinkled into this episode, though they’re heavily overshadowed in the time travel-focused storytelling. At the very least, the Iris/Nora subplot isn’t bad in concept though, as Iris introduces Nora to the various facets of Barry’s life. Nora must then confront the possibility that she brings up painful memories for Barry by taking his dead mother’s form, a fear that Iris assuages with a pep talk. Take another shot! There’s also another subplot with Caitlin and Frost, but this one is especially confused and meaningless. It starts with Caitlin and Frost disagreeing over some apartment art (seriously?), and then that’s completely forgotten in favour of a quasi-resolution with an epilogue scene, wherein Joe warns Frost about Kristen Kramer coming to arrest her… Which Frost is completely defiant towards. Uh, why? I suppose it’s to create a convenient excuse for more drama with Team Flash down the line, but regardless, I’m getting the sense that most of the Caitlin/Frost material ended up on the cutting room floor this week. What we did get with these two didn’t fit with anything else at all. 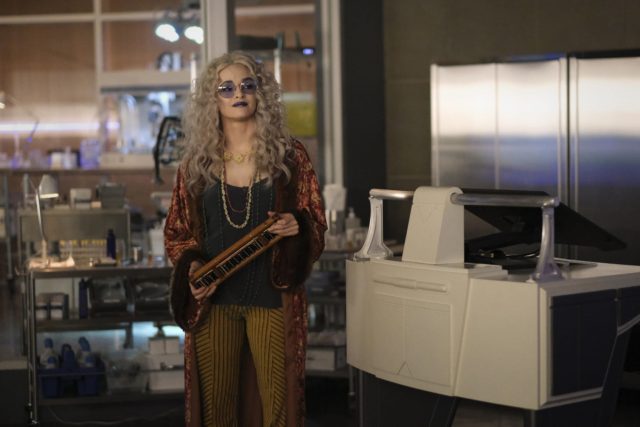 Even so, “The One With the Nineties” is a pretty fun episode of The Flash, one that feels especially rewarding for Chester. The emphasis on Team Flash’s supporting cast this week feels gratifying, even if Caitlin and Frost end up awkwardly shoehorned into a series of plots that really don’t have room for either of them in this case. On the flip side, the 90’s gimmick, while it feels like it would ideally be at home on Legends of Tomorrow, rather than The Flash, is pretty charming, even if it could also be justifiably called shameless Millennial pandering. I can imagine that DC Comics enthusiasts will also be a little miffed about the head-scratching introduction to the Still Force here, which actually operates like the Forever Force in the Arrowverse, essentially making it the Still Force in name only. Also, the Still Force is wielded by some random guy on this series, rather than a cool, recognizable Flash villain like Turtle or Zoom, adding insult to injury.

Yet again, the fact that The Flash has burned through so many of the Flash Family’s iconic villains from DC Comics lore by this point has come back to bite it in the ass. Hopefully we can at least get another promising threat to sustain the show next week though, considering that Frost is pretty much begging for open war with Kristen Kramer, and I imagine it won’t be long before some troublesome metahuman takes it upon themselves to exploit that.

The Flash 7.6: "The One With the Nineties" Review
The Flash delivers an entertaining, surprisingly heartfelt trip to 1998 for Cisco and Chester this week, despite its confusing establishment of another opposing Force.
THE GOOD STUFF
THE NOT-SO-GOOD STUFF
2021-04-07
80%Overall Score
Reader Rating: (0 Votes)
0%