Supergirl can finally begin the events of its sixth and final season in earnest this week, following last week’s season premiere, which was originally meant to serve as the Season 5 finale, before complications caused by the ongoing COVID-19 pandemic and lead star, Melissa Benoist’s maternity leave bumped it to almost a year later. To my pleasant surprise, the planned conclusion to Season 5 wasn’t immediately undone either, at least where Kara is concerned. Instead, “A Few Good Women” leaves Kara stuck in the Phantom Zone for the foreseeable future, albeit with a few other promising story turns that could foreshadow a new major threat for Supergirl’s overall climax later this year.

Aside from Kara being stuck in the Phantom Zone, another major development also takes place with the Luthor family this week, and one that’s probably long overdue by now– Lex going on trial for his crimes committed alongside Leviathan. Leviathan of course are dead and gone at this point, but Lex nonetheless faces human judgment, hinging on the testimony of Eve Teschmacher, all of which is planned to be covered in detail by CatCo. Andrea and Lena even end up in their latest spat over this big news, when Andrea tries to strong-arm Lena into giving an interview to help boost CatCo’s failing fortunes, only for Lena to publicly testify at Lex’s trial in the end anyway. Well, in that case, both of these women just kind of look bad in the end, though Andrea most of all, because of how Lex’s trial ultimately turns out.

Yet again, the endless psychological chess game that’s always being played between Lex, Lena and Lillian remains one of the most appealing recurring character conflicts on Supergirl, continuing to effectively keep viewers guessing. The fact that Jon Cryer is billed as a guest star here also keeps viewers effectively in suspense, making this trial appear as if it’s legitimately going to be Lex’s last stand. Despite that though, Lex successfully turns Eve’s testimony around on her, by revealing the details of her former obsession with him, which is more than a little convenient, but it does cast at least some reasonable doubt on Eve’s testimony, I suppose. Either way, Lex is ultimately found not guilty by the remote jury, something that surprises even him, complete with Otis humourously being unable to execute a violent escape plan that Lex put into place because he was certain he would ultimately be found guilty, after Lena’s testimony especially.

The altered state of affairs for both LuthorCorp and CatCo promises to be a key part of Supergirl’s final season, and I’m really looking forward to seeing how both companies pull themselves out of what appears to be a death spiral in CatCo’s case especially. Andrea and CatCo being nailed for their rushed media coverage of the trial and Lex’s apparent guilt (viewers know he’s guilty, but the world at large obviously doesn’t), only for Lex to be found innocent, only further condemns Andrea as a journalist, even if said condemnation loses a bit of impact when it’s once again framed through William, still Supergirl’s worst regular character at this point. In fact, several elements of this episode’s storytelling felt rushed while trying to hastily establish where everything is set to fall in the post-Leviathan National City, to the point where Nia blowing off William to go help Team Supergirl carries pretty much no consequences, begging the question as to why Andrea dumped the story of Lex’s trial on Nia’s lap at all. Couldn’t William have done it himself?

Team Supergirl’s problems do appear to be multiplying in the short term as well, as they immediately struggle to pull Kara out of the Phantom Zone. They even enlist the help of a vampire-like alien named Silas, from the planet, Transylvane (Ugh, seriously? Supergirl is really starting to run out of ideas for its alien species!), who is allegedly the only person to attempt to break into the Phantom Zone, after his husband was wrongfully imprisoned there for six months… But somehow died? Or went insane? It’s kind of poorly explained. Either way, this is another excuse for Team Supergirl to rage and whine and mope, and I’m already so goddamn sick of it. Is this really what most of the hero writing for Supergirl is going to entail for the remainder of this final season? Stop feeling sorry for yourselves, you self-righteous morons! Stop throwing a tantrum every time a problem doesn’t instantly resolve itself through magic and pure plot convenience. Six seasons in, and Team Supergirl has somehow gotten less mature with time, not more!

Anyway, with that rant out of the way, I must admit that I do like this episode’s big twist with the Phantom Zone in the post-Crisis Arrowverse, namely the fact that it’s now been fragmented into an infinite number of pocket dimensions, of which Kara could be stuck in any of them. This is yet another unintended consequence of Crisis on Infinite Earths, and its subsequent creation of the Arrowverse’s new Earth-Prime setting. Just as Earth-Prime merged several universes and timelines into one singular reality, the Arrowverse’s Phantom Zone in turn split apart, adopting pieces from the entire dead pre-Crisis multiverse, because every action creates an equal and opposite reaction. This is legitimately smart, and creates challenging, meaningful consequences from Kara ending up in the Phantom Zone, especially when the heroes’ separate efforts to try and punish Lex surprisingly end up falling through, currently for reasons unknown.

The consequences surrounding the Phantom Zone don’t just happen outside of it either. Kara herself faces a surprising turn after quickly becoming menaced by the resident Phantoms, being saved and deposited into a cave by another Phantom Zone prisoner. This isn’t just any prisoner however, but is actually Kara’s own birth father, Zor-El! Because Zor-El sacrificed himself to save Kara, Alura and Argo City during the destruction of Krypton (an effort that had a much happier ending in the Arrowverse than it did in DC Comics lore, that’s for sure!), he’s been languishing in the Phantom Zone ever since the day Krypton exploded, allowing Kara to finally reunite with her father many, many years after she initially fled her home’s planet destruction in her space pod. Zor-El is determined to hide from the Phantoms forever, but Kara insists on trying to push on, especially when she learns that the Phantom Zone being fragmented could mean that she and her father could capture a Phantom to get around the various pocket dimensions they’re now stuck in. It’s just crazy enough to work, I think! 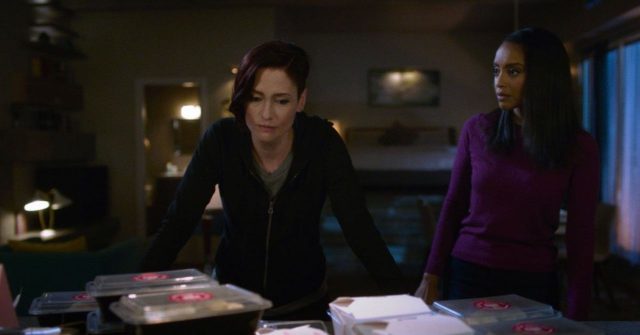 The botched initial effort to free Kara also results in at least one Phantom escaping into National City as well, through a possession of Silas! Considering that the entirety of Team Supergirl’s combined might couldn’t even scratch any of the Phantoms that initially tried to invade, that’s a big deal, and will no doubt create a distressing obstacle for National City in the weeks ahead! “A Few Good Women” does suffer from an overload of new plot turns, admittedly, resulting in several rushed storylines, a problem that’s exacerbated when Team Supergirl, and now CatCo’s head employees, are all wasting too much time continuing to whine and mope and feel sorry for themselves. Even so, Supergirl’s sixth and final season appears to be doing alright so far. It’s presenting some inspired ideas, and it’s not immediately playing into viewers’ expectations either. This is awesome, because Supergirl has had an infuriating habit of playing it far too safe in its plotting throughout too much of its run, something that felt especially apparent last season!

Supergirl has failed to follow through on its designs of growing up and not taking the easy way out in its storytelling before, granted, but with the show now entering its last batch of episodes this year, I’d like to have a bit of faith that the series will push itself toward a bigger finish than viewers would initially expect. Most of all though, I’m very glad to see that Kara being thrown into the Phantom Zone didn’t end up being immediately reversed. In fact, if anything, the new state of the Phantom Zone could make Kara’s rescue much more complicated than most any obstacle that Team Supergirl has singularly dealt with in the past!