Team Supergirl has created a hell of a mess for National City, after they accidentally unleashed a wayward Phantom from the Phantom Zone. Meanwhile, Kara continues to stumble around within the Phantom Zone, alongside her father, leading to Supergirl staying on largely the same gear this week, despite the promising introduction of a crucial new character. “Phantom Menaces” was also upheld nicely by the continued drama surrounding the Luthor family, as Lena starts making concerted efforts to shut Lex out of LuthorCorp, leading to an unintended result that nonetheless provides a promising shake-up to the status quo.

The Phantom Zone storyline takes an equally unexpected turn as well, after Zor-El is captured by a band of rogue villains, leaving Kara defenseless with a broken leg. Kara however is pulled to safety, into another cave, go figure (are the Phantoms just allergic to caves in the Arrowverse?!), by a mysterious woman. After talking to the woman for a bit, Kara then learns that she happens to be a fifth-dimensional being called Nyxlygsptinz, or, “Nyxly” for short, one that was formerly acquainted with Kara’s fifth-dimensional foil, Mr. Mxyzptlk, naturally. In DC Comics lore, Nyxly is the wife of Mr. Mxyzptlk, and the former landlord of Superman, when he first moves to Metropolis. Obviously, that angle appears to have been dropped from the Arrowverse though, with Nyxly instead being a princess that was exiled from her fifth-dimensional world in Supergirl’s case, on account of being too beloved and benevolent for her tyrannical father, or so she claims. 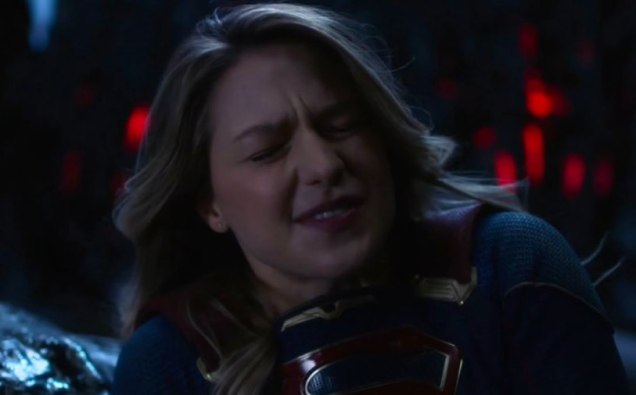 If I had to guess though, I’d say that Nyxly is lying, or at the very least omitting crucial information about why she was cast into the Phantom Zone. After all, Nyxly directly tells Kara that no one in the Phantom Zone can be trusted, and that no doubt includes herself. In fact, I wouldn’t be surprised if Nyxly ends up being this season’s arch-villain, a female counterpart to Mr. Mxyzptlk that ends up fully unleashing all of the eccentric might of the fifth dimension on Team Supergirl and National City! Perhaps that won’t ultimately be the case, but Nyxly’s immense magical power is clearly cause for concern. Speaking of, I have to wonder how Nyxly’s power-dampening bracelet even works at all, considering she gets it off unrealistically easily, immediately after Kara shows up, thus allowing Nyxly to quickly heal Kara’s leg, and take back Zor-El from his captors. What was the point of trying to disable Nyxly’s magic at all then? Well, this does represent a significant step forward in the Phantom Zone plotline at least, though I’m curious about this apparent beast-worshipping cult that Zor-El got captured by. I imagine they’ll make escape even more difficult for Kara, in any case!

Kara’s persistence and courage in the Phantom Zone continues to work pretty well as a subplot, but the rest of Team Supergirl is still suffering through lacklustre writing at this point. Alex even initially refuses to leave the couch at the start of this episode, which is so pathetic that it’s almost infuriating. Once again, Supergirl, I thought that Alex was supposed to be your tough, independent badass character! What the hell?! Even J’onn and M’Gann force an emotional conflict that’s completely pointless here, with J’onn deciding to take M’Gann’s advice and press forward, only to later decide that he should let his emotions rule him in the end. Yeah, that’s stupid. It really feels like Team Supergirl just can’t function properly without Kara, though you’d think J’onn at least could rally them together and keep them focused!

The self-pity angle worked at least a bit better with Brainy though, who ultimately ties in with Lena’s storyline this week. After Lena tries to shut Lex out of LuthorCorp, only to be served a court order demanding Lex be given full control of the company’s info and assets, Lena revisits her desire to simply kill Lex, as she did at the end of Season 4. Brainy meanwhile gives a grisly account of exactly how one could murder Lex and dispose of his remains for good, which is actually very bold for a more light-hearted DC show like Supergirl to detail! Lena comes to her senses after Brainy’s outburst and tries to calm him down, but this exchange between Brainy and Lena nonetheless serves as an episode highlight, with the two commiserating and facing their rage in the face of knowing that killing Lex won’t truly solve anything. It really must be infuriating for the Superman Family to know that they can’t truly kill any of the villainous Luthor’s without permanent, world-altering consequences, and that impotent rage was captured well here, especially when Lex effectively, “Wins” his latest mental chess game with Lena.

Or does he? The show ultimately makes an unexpected, but intriguing decision with Lena’s character in this episode, particularly considering that Lillian just recently sold Lena her entire stake in LuthorCorp. After Lena tries to steal Lex’s money and funnel it to a local children’s’ hospital (this is 100% illegal, to be honest, but I suppose it’s not like Lex wants the cops snooping into his finances!), Lex retaliates by having Otis commit arson in the wing of the children’s’ hospital that Lena funneled the money to. Yeah, it’s a little petty for Lex, but also astonishingly ruthless! Still, I did like the fallout from this crime (which somehow didn’t hurt anyone?), which involves Lena accepting a settlement that sees her rescinding all of her control, assets and corporate interest in LuthorCorp, in exchange for any investigation into her affairs with Non Nocere being dropped, effectively leaving the company to Lex in full. This is a very risky move, but Lena’s warning that Lex always finds a way to self-destruct when given absolute power nonetheless feels valid. The question is, how many people will suffer in the meantime, before Lex’s hubris inevitably becomes his undoing?

Amazingly, I haven’t even addressed the core storyline of this episode all that much, and that’s because it’s not all that exciting. I did mention that J’onn, M’Gann and Alex have another prolonged pity party with one another at least, further cementing that Supergirl just has no good ideas for its supporting cast right now. Beyond that though, the escaped Phantom starts ‘infecting’ other unknown citizens in National City, leading to a growing army of decoy Phantoms that M’Gann tries to stop single-handedly, only to become infected herself. J’onn then uses their soul-melding procedure to save M’Gann, which more or less amounts to false tension, even while Lena intervenes to imprison the decoy Phantoms that have been created so far. The original Phantom gets away again though, so no forward movement was effectively achieved with the Phantoms this week, beyond Silas being fully turned into a Phantom anyway, and that doesn’t really mean anything at this point.

One problem I immediately suspected Supergirl may have with an extended final season is that the show is inevitably going to churn out tedious filler episodes on certain weeks, and this appears to be one of them to some extent. The core storyline in, “Phantom Menaces” is a complete waste, as Team Supergirl continues to spin their wheels and waste time crying into their metaphorical ice cream, rather than actually being useful for most of the runtime this week, again! At least the Luthor’s continue to pick up the slack though, with Brainy also continuing to ride high off the back of disabling his emotional inhibitors. Kara’s first encounter with Nyxly also presents some kooky promise for the rest of the season, when Nyxly inevitably escapes the Phantom Zone with Kara at some point, and likely becomes a major obstacle for Team Supergirl after that. I’ve been craving a magic-themed arch-villain on Supergirl since the series started airing on CBS in 2015, and only now, as Supergirl approaches the finish line, do we seem to be getting one at last!

Kara will probably still spend a few more weeks in the Phantom Zone at this rate though, possibly not even getting out before Supergirl’s current timeslot is retaken by Superman & Lois next month. Unfortunately, this probably means that we can expect more wasted time from Kara’s increasingly ineffectual allies over the next few weeks, while the rest of National City somehow seems relatively unconcerned by its growing Phantom problem.

Supergirl 6.3: "Phantom Menaces" Review
Supergirl continues to waste too much time with Kara's ineffectual allies this week, though solid subplots with Kara and the Luthor's continue to salvage the writing.
THE GOOD STUFF
THE NOT-SO-GOOD STUFF
2021-04-15
74%Overall Score
Reader Rating: (0 Votes)
0%