NOTE: Some spoilers from throughout the tenth season of, “The Walking Dead” are present in this review

The Walking Dead has been in a very weird place throughout much of its tenth season. The season proceeded well enough throughout its front half in 2019 at least, which focused on psychological warfare with the Whisperers, after Alpha and her faction of walker skin-wearing survivors became gradually more provoked against the protagonists’ survivor communities. Once 2020 rolled around though, The Walking Dead’s latest season was hit with a number of bizarre setbacks. Danai Gurira left the show to start, depriving The Walking Dead of Michonne, another of its lead survivors, and that’s before the COVID-19 pandemic amped up in March of last year. That was a whole other can of worms that AMC had a… Rather unique response to.

Despite most of Season 10’s back half also proceeding as planned in early 2020, AMC was ultimately unable to complete post-production on Season 10’s originally planned finale, “A Certain Doom”, due to the recently-ordered global COVID-19 lockdowns. Thus, they were forced to delay this one episode all the way to early October, airing it as a standalone special episode. That wasn’t all though! AMC also retroactively expanded Season 10 with six additional episodes after COVID-19 hit, set to air in early 2021, presumably as some kind of apology for the original season finale’s delay, I guess? These six ‘bonus’ episodes were presented in more of an anthology style to boot, without a consistent overall season arc, unlike the majority of Season 10’s proper episodes. 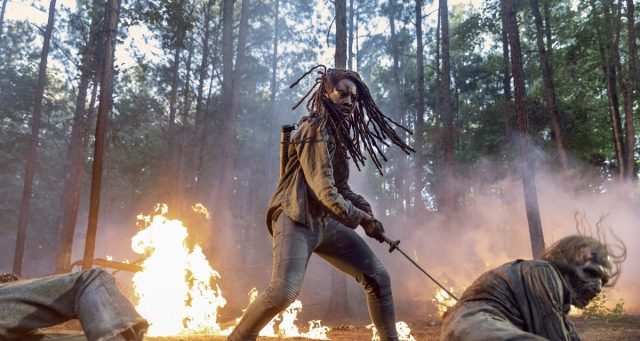 Most significantly however, the COVID-19 pandemic, and its further straining of The Walking Dead’s dwindling ratings, finally led to AMC facing the music with their rather long-in-the-tooth flagship original series. AMC announced during the early post-COVID-19 months, wherein The Walking Dead and its spin-offs were temporarily pulled off the air, that The Walking Dead would finally, at long last, be coming to an end, specifically in late 2022. The show’s upcoming eleventh season, which has been expanded even further to encompass a staggering 24-episode order, has been officially confirmed to be its last, with the entire season set to adapt the lone remaining major story arc from the Walking Dead comic books– The Commonwealth arc. It’s good that The Walking Dead is finally building towards an overall climax as well, because Season 10, COVID-19 complications notwithstanding, largely represents a long-running series that’s starting to lack focus, and is quickly running out of places for its narrative to go.

This lack of focus also results in some really scattershot writing, with some veteran characters particularly suffering this season. Carol is the worst example, suddenly regressing into a liability and a headcase, one that largely exists to put Alexandria and the other communities in more danger. As much as Carol’s fury towards arch-villain, Alpha is justified, considering that her adopted son is dead, and her husband divorced her, Carol’s behaviour is inexcusably contrived throughout the season. She’s not the only one either. Rosita found herself in a bizarre love quadrangle that never really felt like it had meaningful development. Siddiq was a bit of an exception here, but that’s moot when Siddiq is killed early in the season, marking one of Season 10’s few high-profile character deaths. The other noteworthy deaths in Season 10 were Earl, whose character didn’t really have anywhere else to go anyway, and Beatrice, a character that never really stood out to any meaningful degree. 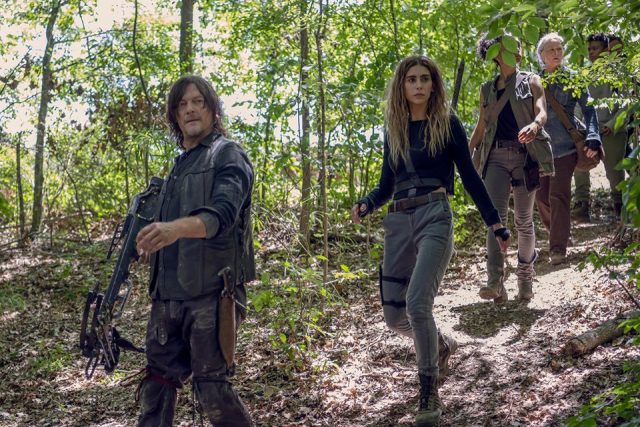 On the better side of character development, Negan had an especially good season in this case, one that took him to all sides of morality and purpose. Negan was an excellent wild card throughout Season 10, even going on to serve as the almost exclusive focus of the true Season 10 finale, “Here’s Negan”, a loose adaptation of the comic book of the same name. This episode went deep into Negan’s surprising origin, including introducing us to his late, cancer-stricken wife, Lucille, setting the stage for Negan’s rise, fall and redemption in the world of the walker apocalypse. Negan also defined much of this season by embedding himself within the Whisperers, threatening to bring him back to his treacherous old ways. In the end though, Negan proved to be the instrument necessary through which to kill Alpha, using false intel on Alpha’s defected daughter, Lydia to slice Alpha’s throat and behead her, thus beginning the destabilization of the Whisperers, which would carry through to their ultimate destruction in, “A Certain Doom.”

The Whisperers themselves also continued to be standout foes, marking some of the best antagonists on The Walking Dead since The Governor and Woodbury, or the Saviors before they got dull. Their subversive, psychological tactics did some real damage to the survivor communities this season to boot, culminating in the destruction of Hilltop. Alexandria also saw quite a bit of strain under the repeated, walker-fueled attacks of the Whisperers, though the six bonus episodes saw that community ultimately pull itself together again. Alpha’s daughter, Lydia also ends up fully joining with Alexandria in the end, giving the survivors another useful ally to eventually use against the Commonwealth. 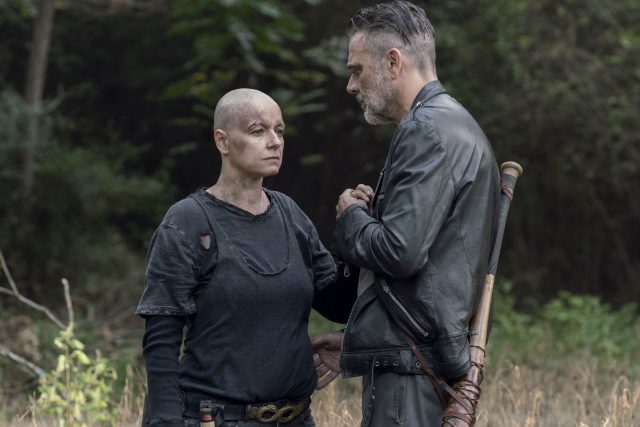 Speaking of the Commonwealth, their foreshadowing also works very well, which is why it’s a shame that even Season 10’s six bonus episodes offer very little focus on it. This story foundation is initially laid after Eugene’s woes with Rosita lead to him contacting a mysterious woman named Stephanie over the radio, who eventually agrees to meet him. Taking Ezekiel and Yumiko, Eugene’s party then has a chance encounter with a flamboyant lone survivor named Princess, a highlight personality that comes rather late in the game. Princess also headlines arguably the best of Season 10’s six bonus episodes, which delves into her isolation, trauma and decreasing mental instability, as she and Eugene’s group are captured and interrogated by stormtrooper-like soldiers that pretty much certainly work for the Commonwealth. The result of inevitable capture may be the same in the end, but Princess’ writing goes to show that The Walking Dead can still manage some pretty standout story arcs for its various personalities, when it sets its mind to it.

As for how these anthology-style bonus episodes fared overall though, they were ultimately a pretty mixed bag, leading to Season 10 ending on an even weirder note than it otherwise would have, had COVID-19 not happened. The Princess-centric episode, “Splinter”, along with proper season finale, “Here’s Negan”, were the definite highlights. Despite this though, the Carol/Daryl tension that spun out from these bonus episodes, presumably meant to serve as a lead-in to AMC’s Carol/Daryl-fronted spin-off series that’s scheduled to premiere in 2023, failed to really spark or generate much interest. Likewise, Maggie’s return to the show, while exciting, hasn’t gone anywhere that novel or interesting yet. This felt especially apparent in the disappointing, “A Certain Doom”, which would have been a much less satisfying ending to Season 10 if it had remained the finale. So, I guess if there’s one upside to Season 10’s six bonus episodes, it’s the fact that the season didn’t need to end on that sour note anymore. 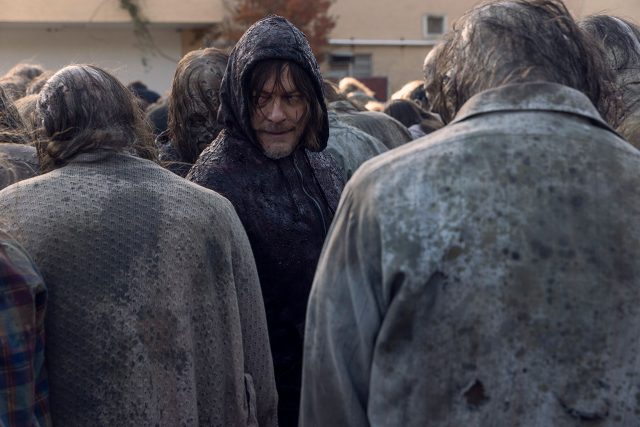 But this brings me back to how scattered and uneven Season 10 of The Walking Dead ultimately felt, even considering its need to adapt to sudden actor departures, and the COVID-19 pandemic disrupting its production schedule and distribution. The true ‘Whisperer War’ that punctuates this season feels appropriately horrifying at least, plus some of the character work this season is admittedly pretty solid. Regardless though, this season’s uneven quality and scattershot storytelling lead to too much of it feeling frustratingly unmemorable, and failing to register for audiences. Perhaps some of this comes down to franchise fatigue, especially considering that The Walking Dead’s pandemic-flavoured zombie apocalypse and frequently depressing tone feels especially uninviting in a post-COVID-19 world. Either way though, The Walking Dead’s best days are clearly behind it.

For all of Season 10’s occasionally great narrative ideas and occasionally satisfying characterization, it’s difficult to deny that The Walking Dead feels tired by 2021, even as its first spin-off, Fear the Walking Dead unexpectedly sees a renewed creative spark in its current season. AMC continues to push their flagship Walking Dead series, and the shared TV universe it inhabits, like it’s still the hottest thing on television over a decade later, but if anything, that just makes The Walking Dead look especially desperate and detached from reality. At least AMC has finally resigned themselves to the fact that The Walking Dead is losing runway though, and they’ve now set a clear release window for its series finale, having only one major story arc from the source comics left to adapt. 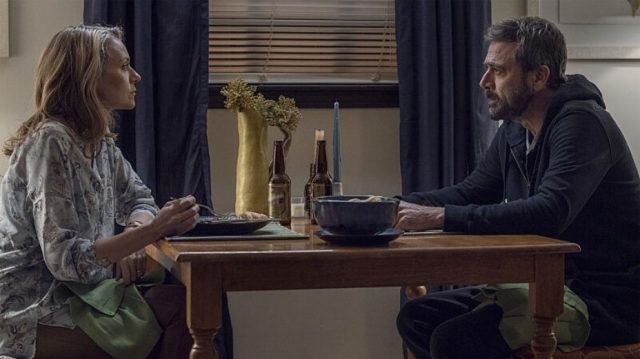 I wouldn’t go as far as to say Season 10 of The Walking Dead is bad. It just feels messy, sluggish and blatantly compromised. It’s good enough, especially considering that the series found its own renewed creative spark under new showrunner, Angela Kang last season, but even that feels like it’s starting to retread the same old ground by this point. If you’re still invested in The Walking Dead and its shared TV universe, even so many years later, then Season 10 of The Walking Dead has enough bright spots to satisfy you. It’s also indicative of the fact that The Walking Dead no longer has focus though, and currently feels like it’s just dragging itself out for its own sake. We can certainly hope that the ambitious Commonwealth storyline will serve as that one last shot in the arm that The Walking Dead needs to go out with a bang next year (before it’s inevitably replaced by more spin-offs that no one asked for), but for now, The Walking Dead’s penultimate season is a bit of an aimless slog. There’s still some sinister, squeamish fun to be had during the Whisperer War, but the endless, unfulfilling grind of survival is really starting to wear on the audience as much as the characters.

The Walking Dead: Season 10 Review
The Walking Dead's tenth season delivers a solid take on the Whisperer War, but its scattershot writing and uneven focus leave it all over the map in terms of its narrative and direction.
THE GOOD STUFF
THE NOT-SO-GOOD STUFF
2021-04-15
75%Overall Score
Reader Rating: (0 Votes)
0%