Black Lightning finally returns to its main narrative this week, picking up with the second half of its ‘Book of Ruin’ story pod. Tobias’ plans for Freeland appear to be ramping up, unsurprisingly, and the next phase of their effects are beginning to be felt throughout the Pierce family. This leads to, “The Book of Ruin: Chapter Three: Things Fall Apart” focusing especially heavily on the Pierce’s this week, something that delivers an uneven result, considering how lost for ideas Black Lightning has so far been on its Pierce family story arcs this season. Fortunately, the show is doing a good job of capitalizing on Anissa’s and Grace’s recent marriage at least, allowing them to function more as a unit, while Jennifer, under the new identity of, “JJ Stewart”, endures a nervous return to Garfield High.

Garfield High has been largely neglected throughout Black Lightning’s final season before this point, at least beyond the domestic difficulties of Marcel Payton. Jefferson’s civilian job did take back some considerable focus this week however, after the FBI raids Jefferson’s home, accusing him of embezzling money from Garfield’s public funds. Unsurprisingly, these allegations appear to be the latest major move by Tobias, who is currently enjoying a big boost in his mayoral campaign, after green-lighting a new hospital development where Jefferson’s old family home is situated. This also has the tragic side effect of winning Marcel over to Tobias’ cause to boot, as he and the other residents of the neighbourhood receive considerable relocation funds to allow for Tobias’ hospital to be built.

Yet again, Tobias is almost single-handedly upholding the continued appeal of Black Lightning during its final episodes, while Jefferson and his family struggle to keep pace with him. On this note, the narrative did feel spread rather thin this week, especially where Jefferson and Lynn are concerned. Jefferson predictably hits a wall while investigating how he’s been framed for embezzlement, and while Gambi steals some promethium from Lauren’s cache while faking a false alarm, that’s really all he directly accomplishes this week. Gambi does volunteer to be the host for Lynn’s experiments regarding Val’s meta genes however, leading to the Pierce’s eventually discovering that Val’s metahuman ability allows her to block anyone else’s metahuman abilities. Needless to say, Val being so close to Tobias will make him very difficult to take down! 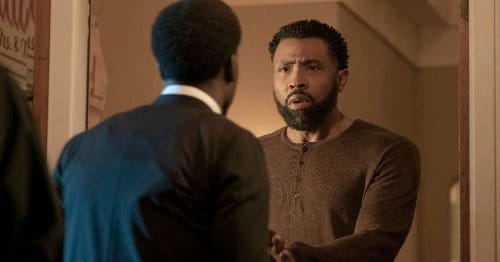 Anissa and Grace also run afoul of Ishmael this week to boot, after Anissa becomes suspicious of Monovista getting into bed with her research lab, seemingly with a cure to cystic fibrosis. The Ishmael subplot didn’t feel like it went anywhere meaningful this week, especially with the Kobra Cartel being entirely absent in the narrative yet again here, but at least it provided an opportunity to show Anissa and Grace acting as more of a unit for a change. Marriage seems to have benefited these two characters so far, who finally appear to have put their increasingly trivial differences behind them. That said, it’s disappointing that all this subplot accomplished was Gambi repeating what we already know– Ishmael is a powerful assassin that seems to be targeting the Pierce’s. We didn’t really get any definitive answers regarding Monovista’s latest power grab too, and that’s lame.

Similarly, the latest steps in Jefferson’s and Lynn’s investigations hit a wall this week as well, creating the feeling of a filler episode for the most part. As with Gambi poking into Ishmael, Jefferson and Lynn discover that Red is Mayor Black’s killer, but again, we already knew this. We’ve seen Red’s metahuman abilities, and we know he appears to be able to control metal to some degree. I guess we just had to spend a main storyline this week having the Pierce’s catch up to what the audience already knows. It is nonetheless good that Jefferson and Lynn aren’t squabbling this week though, as Jefferson makes his 500th apology to Lynn for supposedly threatening her sobriety, and that’s the most he accomplishes in this case. Seriously, for a superhero drama on The CW, Jefferson is spending very little time being a superhero, as usual.

The drawn-out, tedious effort to keep up with Tobias did get complemented by a slightly better Jennifer storyline though, as we see Jennifer witness students taking sides in the public debacle of Jefferson’s supposed embezzlement. Jennifer attempts to take issue with students disparaging Jefferson to promote their own social media presence (careful, CW, it almost sounded like you’re standing against social justice warriors for a minute!), and while she’s ultimately unsuccessful, she does meet a new love interest in the process. We don’t know anything about this guy yet, something that Grace also usefully points out (on this note, this Jennifer/Grace scene was a great highlight moment this week, cementing Grace as truly part of the Pierce family from here on out), but Jennifer finding a new boyfriend while also struggling to adjust to a new appearance could at least give her something interesting to do for the remainder of Black Lightning’s run, even while Khalil threatens to return to her orbit.

Yes, after last week’s backdoor pilot for The CW’s proposed Painkiller spin-off, it appears that Khalil is actually going to get directly involved in the Pierce family’s climactic battle against Tobias, promising to use his own resources in order to try and clear Jefferson’s name. That’s fairly exciting, especially while most of the Pierce family is continuing to waste time chasing their tails against Tobias at this point. It plain and simply feels like Black Lightning’s ‘Book of Ruin’ story pod didn’t need to be four episodes long, and, “The Book of Ruin: Chapter Three: Things Fall Apart” best exemplifies that by feeling like a boilerplate filler episode. That’s a disappointing note to return to Black Lightning’s core narrative on, following last week’s overall solid Painkiller pilot. The show’s ‘Book of Ruin’ pod is set to conclude with next week’s episode though, so hopefully the Pierce family’s latest findings give them an actual edge against Tobias for once, because so far, the final battle for Freeland continues to remain very one-sided.