Batwoman took a couple of weeks off after setting up a major twist, namely Luke being shot by rogue Crows agent, Russell Tavaroff. With Luke now on death’s door, Team Batwoman must thus get to the bottom of this latest crooked Crows move, one that eventually snowballs into having massive consequences for Gotham City, and this series at large. That may be promising in a vacuum, but unfortunately, “Armed and Dangerous” ends up being another badly-written Batwoman episode that’s contrived at best, and sometimes outright offensive at worst. If you were hoping that the show would find a tasteful, thought-provoking way to address Luke being shot in a blatantly racist attack by Tavaroff, you must be new here.

Batwoman has pulled some very cynical, zoomer-baiting moves during its current run to date. Luke being shot by Tavaroff however may be one of this show’s worst ideas yet, at least in its execution. It takes a very complex, horrific issue facing too many innocent Black Americans every day, and distills it into a cheap drama device with a resolution so infuriatingly unrealistic that I imagine it’s probably going to result in Batwoman losing even more viewers than it already is! This is primarily because Mary immediately conjures up some Desert Rose after she learns that Luke has been shot by the Crows, which of course cures Luke entirely, making his shooting practically pointless. The only minor inconvenience during this process is Mary being unable to get past two Crows agents situated outside of Luke’s hospital room, which is rectified by Sophie calling Wolf Spider, whom she apparently has on speed dial for some reason? What the hell?!

Okay, Batwoman, more than ever, if you are going to do a storyline about an issue this sensitive, you really need to go all the way with it! It’s extremely disrespectful to the Black community, one of your supposed target audiences, to have Luke nearly die in a racially-motivated Crows shooting, only to eventually hand wave it away in this very same episode, with some literal magic potion! This yet again makes the Desert Rose a lazy plot device through which Batwoman can avoid having real stakes. It leads to every supposed dramatic moment in this episode completely falling flat, because, as I previously predicted, Luke was never in any real danger. If you’re not willing to kill Luke off here, or at the very least take him off the board in some extended way, having some real, permanent ramifications for Team Batwoman and Gotham City, then this storyline is taking the easy way out, and is thus offensive in the context of a very serious issue that’s too often taken people’s lives in the U.S. especially!

On the flip side, at least this episode manages to capture some lasting stakes in the fallout of Luke’s shooting, but they’re arguably for the wrong side. After Tavaroff falsely manipulates his body cam data to photoshop a gun into Luke’s hand for Gotham’s news broadcasts, in a twist so confounding and idiotic that it gave me a headache (not only does photoshop not work this way, but police body cam footage is also crucial during police operations exactly because it can’t be altered by the officers involved!), Ryan infiltrates Crows HQ in an attempt to salvage the real footage. At this point however, Jacob also gets knocked out by Tavaroff after attempting to suspend him pending investigation, forcing Ryan to intervene, and save Jacob, leaving Luke’s metadata to be deleted. Yet again, I don’t think police bodycam footage can just be deleted on a timer like that, but whatever. Ryan’s controversial decision does come with the advantage of finally neutralizing Tavaroff though, at least to some extent (next week’s promo appears to indicate that he isn’t in Blackgate for very long), but it’s Ryan’s subsequent speech to Jacob that finally has real consequences for the show. Take a shot.

It turns out that Crow corruption runs so deep that the entire outfit is irrevocably compromised. I would once again argue that this isn’t really how real life works, but I must nonetheless admit that I’m intrigued at this storyline’s ultimate conclusion; Jacob permanently shuts down the Crows, for better or for worse. I really like the idea of Jacob and Sophie finding a new place in Batwoman’s ensemble, in some post-Crow life. The Crows feel like they were made specifically as an obstacle for Kate Kane’s Batwoman, not Ryan Wilder’s Batwoman, and thus, they no longer work in the series’ current story arc. Not only that, but the idea of Alice forming an alliance with a freshly-freed Jacob, so they can both locate and liberate the hypnotized Kate from Black Mask’s clutches, also stands as a fairly decent cliffhanger tease for next week.

Speaking of Alice, she also marks another brighter spot in this episode, getting a subplot that unfolds between the relentlessly moronic Luke shooting storyline. After Alice finds that the deceased Enigma (who, consequently, is also the daughter of the Riddler in the Arrowverse, maintaining that interesting connection from DC Comics lore) was funneling intel on the Kate family, including Mary, to Black Mask, Alice takes it upon herself to warn Mary in earnest, before her alliance effort with Jacob. Granted, the Alice/Ocean relationship remains juvenile, tedious and unnecessary, as usual, but Alice nonetheless occupies several of this episode’s best scenes. She’s continuing to move along on an interesting journey to becoming something of an anti-hero, and perhaps we’ll  eventually see Alice embrace her more vaguely heroic DC Comics identity as ‘Red Alice’ next season. 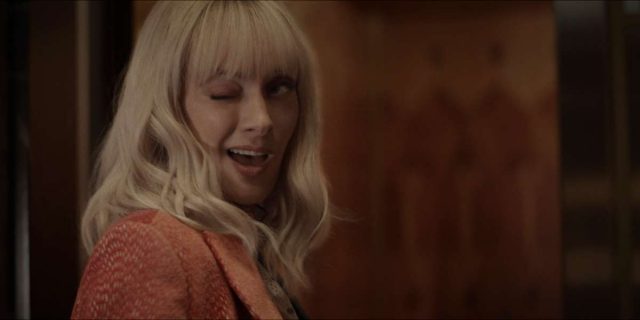 Finally, Luke has an existential debate with the spirit of Bruce Wayne within his subconscious every so often in this episode, giving Warren Christie a welcome chance to reprise that role after his Hush storyline ended up being cut short by Ruby Rose’s departure from the show. This doesn’t ultimately mean anything beyond more eye-rolling, overdone melodrama though, in turn making the cheesy, fantasist solution to Luke’s shooting even more corny and insufferable. I imagine that this is supposed to lead into Luke deciding to embrace a vigilante identity as Batwing for the climax of this season, and next season, but even if that’s the case, did Batwoman really need to inspire this transformation with such a tasteless, disrespectful storyline? Like I said, if Luke was going to be the victim of a racist police shooting, it can’t be done halfway, nor be quickly resolved with an obviously bullshit solution!

It’s almost tragically ironic that the most exciting fallout from Luke’s shooting is felt by the former Crows at this point, not by Luke himself. The CW has released publicity images of Luke embracing his DC Comics vigilante identity as Batwing though, so my guess is that Luke will finally take up the Batwing mantle by Batwoman’s season finale in a few weeks. For now though, Luke is just impractically cured by Desert Rose, and that’s it. “Armed and Dangerous” is packed to burst with awful, tasteless writing, and once again has Batwoman hitting a low point. The end result of this episode has promise, but yet again, Batwoman is charging into social justice issues that it’s not nearly smart enough to understand nor properly portray, which is the single biggest reason why this show is losing viewers at an alarming rate. Seriously, Batwoman, enough with the forced, ironically insensitive ‘woke’ storylines! You’re not good at them, and considering your viewership bleed throughout this season in particular, you’re running out of room to keep pressing your luck with them!