The Flash delivered an incredibly rough conclusion to its previous ‘graphic novel’ story pod a couple of weeks ago, one that saw a clumsy and contrived conclusion to the battle against the other Forces. With that story pod now mercifully concluded however, the series can move on to something better, and that thankfully did come, thanks to the previously-teased exit for Cisco and Kamilla. “Good-Bye Vibrations” marks Carlos Valdes’ final episode as a series regular for The Flash, and Victoria Park’s final episode as a recurring lead. Fittingly, their exits are written into the show’s story as well, as Cisco and Kamilla prepare to take up a new life in Arrow’s Star City, complete with Cisco occupying a high-ranking new position at A.R.G.U.S., no doubt as an efficient way to allow Valdes in particular to return to The Flash, or another Arrowverse series, in a guest role at some point in the future.

As sad as it is to see one of The Flash’s fan-favourite leads, alongside a valued member of Team Citizen, exiting the series, it is an inevitable fact when you consider just how long the series has been on the air at this point. Fortunately, Cisco’s and Kamilla’s exits serve as the backdrop of a much better episode than the previous one, a legitimately great one in fact! Cisco’s final ‘case’ with Team Flash happens to involve an especially distinct and creative metahuman threat, namely a second version of legacy DC villain, Rainbow Raider. This ‘Rainbow Raider 2.0’ is Carrie Bates, who doesn’t exist in DC Comics lore (though her name is a reference to DC Comics writer, Cary Bates), but nonetheless presents a very unusual obstacle for Barry and Cisco, since she possesses electromagnetism and light manipulation powers that create extreme euphoria for anyone on the receiving end of them.

This is a clever way to contrast the sadness of Cisco and Kamilla leaving Central City with the wacky, comical nature of Rainbow Raider 2.0’s attacks. Cisco of course becomes Bates’ first victim among the show’s heroes, during his final stint as Mecha-Vibe, whereupon he eventually has to be quarantined by Chester. Cisco nonetheless gets free however, eventually incapacitating The Flash with a cat video (I have to admit, this is pretty funny!), at which point, Barry also gets ‘whammied’ by Bates’ powers. This results in a hilarious sequence wherein Barry and Cisco both have an impromptu dance party in the mission area, leaving Chester to eventually ‘cure’ them with a magic camera. It’s good to see that The Flash is still occasionally capable of presenting its unique brand of delightful weirdness that so expertly defined its fantastic first two seasons especially, considering how tired and long-in-the-tooth the show is starting to feel at times.

Even Bates’ motive is rather unexpected, in a good way. It turns out that she’s using her powers to rob banks and jewelry stores not to enrich herself, but to spread the riches among others that are struggling to pay their bills. As much as this verges a bit on The Flash stumbling into the often-botched social justice commentary that too often drags down Supergirl and Batwoman, this episode’s writing does manage to keep Bates’ plot tasteful and relatable. Better still is Bates eventually stealing a Ferris Air blimp (oh, the Arrowverse is allowed to mention Ferris Air again, for a change?), one that runs on hydrogen for some reason (don’t blimps usually run on helium?), meaning that Barry can’t just speed up there with Cisco and Allegra… Except that he can, thanks to some weird teleportation device? Why have the hydrogen obstacle at all then, especially when it’s not true to life anyway? 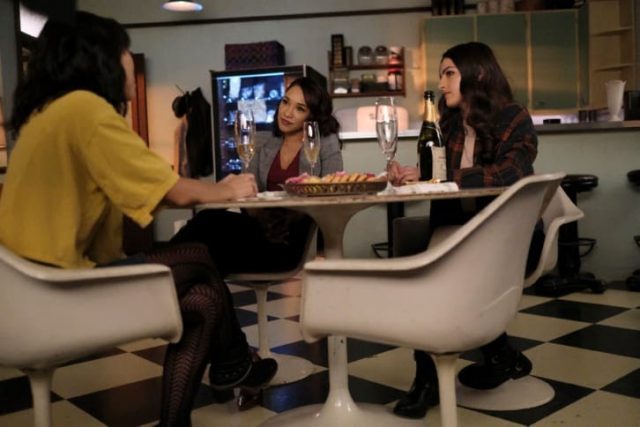 The answer is so that we can have a climax that doesn’t involve Barry having an actual battle with The Flash’s latest metahuman-of-the-week. Instead, Cisco takes apart his Mecha-Vibe harness so that he can prevent the compromised blimp from crashing into a crowded football game, saving thousands of lives in his apparent last act as a superhero. Bates is also given the chance to work off her debt by volunteer work, in another sweet resolution, making for an overall feel-good episode of The Flash that nonetheless still has to be punctuated by a bittersweet goodbye. Even then, this episode also manages to effectively foreshadow what’s next, as Cecile is mysteriously found at Rainbow Raider 2.0’s first crime scene, seemingly detached and on a strange mission. Cecile later seeing an ominous mask in the mirror during this episode’s epilogue is even more unsettling! Could this be a peek at our next arch-villain, assuming that we’re still going to keep delaying Godspeed?

The one sour note in this otherwise strong farewell episode is one contrived bit, wherein Barry and Caitlin unrealistically act as if they want Cisco to leave, which predictably upsets Cisco, and makes him think that his friends don’t care about him leaving Team Flash. This is a weird, unnecessary conflict, one that just makes everyone involved look bad. It’s resolved in the next scene anyway, so why even bother? Regardless, Cisco and Kamilla both get some heartfelt goodbye parties with a handful of charming sequences during this episode’s final moments, as Cisco officially passes the tech support torch on to Chester, while Kamilla helps pick a new mystery candidate for The Citizen. I guess the frontrunner is some woman named Kenji? I don’t know of any such character existing in DC Comics lore, but we’ll have to see who ultimately ends up filling Kamilla’s spot on Iris’ crew, in any case. 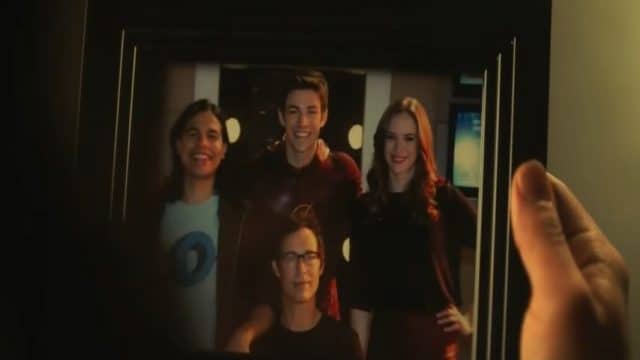 As much as Barry and Caitlin initially and inexplicably neglecting Cisco’s emotions is weird and pointless, the rest of, “Good-Bye Vibrations” nonetheless excels. It’s not only a massive improvement over the prior duffer episode that The Flash suffered through while ending its previous major story arc, but also a very bittersweet, satisfying goodbye for one of the OG members of Team Flash. Plenty of characters have come and gone at S.T.A.R. Labs over The Flash’s current seven-season run, but Cisco was right there from Barry’s first awakening, subsequently being by his side throughout the entirety of Barry’s tenure as The Flash in the Arrowverse. At least we still have Caitlin, Joe and Iris, but even with Chester subbing in for Cisco from this point onward, Team Flash won’t feel quite the same anymore. Like I said, departing leads are an inevitable reality of The Flash’s advanced age, and I wouldn’t be surprised to see some other major players exit the series before The CW ultimately concludes it. One can only hope that they get as memorable a goodbye as Cisco and Kamilla though. Star City will be richer for having received them!