Teddy’s endgame is officially in motion, and this prompts all of Morgan’s allies to come together and try to stop the nuclear destruction that Teddy plans to enact upon the world, or at least whatever he can aim at. As I’ve mentioned already, Teddy’s plan of global decimation clearly wasn’t successful, as the later events of The Walking Dead and The Walking Dead: World Beyond blatantly prove, but Teddy does nonetheless have a contingency plan that threatens to lay more than enough hurt on the specific region where Fear the Walking Dead takes place. This comes into focus during Season 6’s penultimate episode this week, “USS Pennsylvania”, which is a rather cool offering that puts Morgan’s core group within the confines of Teddy’s and Riley’s beached nuclear submarine.

That being said, it’s also apparent that Fear the Walking Dead is starting to strain a bit in order to realize Season 6’s spectacular endgame. Granted, the previous episode from two weeks ago was another season highlight, one that beautifully flexed Teddy’s mad genius, and led to Alicia being shut away from her comrades, albeit with the guarantee that she would survive Teddy’s nuclear destruction. Thus, with Alicia out of commission, it’s up to Morgan and his most reliable survivors to try and save the day, and this means descending into a nuclear submarine with a crew of 150 strong, which creates the double threat of both walkers and radioactivity. No pressure. 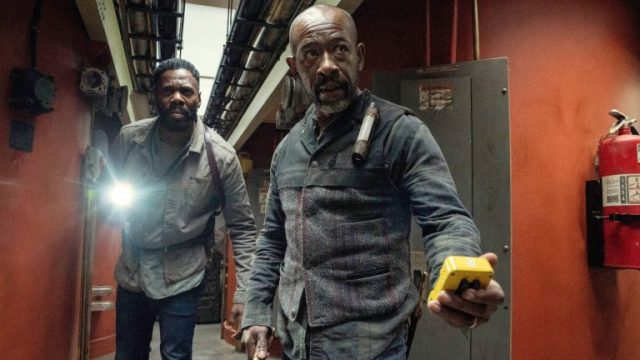 As a dark, claustrophobic showcase of horror, “USS Pennsylvania” truly excels. The ticking clock makes things all the more exciting, as Morgan, ready as ever to sacrifice himself in the name of his community, tries to forge ahead, while Grace is eventually talked into manning the comms, and the other survivors hang back so that Morgan, and eventually Strand, can make the sacrifice play in order to stop Teddy. Yes, ostensibly, Strand is supposed to be this week’s latest anthology character for Fear the Walking Dead’s sixth season, but this episode spotlighted Morgan as much as it did Strand. Even so, Strand’s own desire to prove his worth to Alicia made him equally motivated to put his life on the line with Morgan, or so it would appear.

Unfortunately, Morgan and Strand butting heads over who gets to give their life for the future quickly becomes tiresome, especially when it leads to a lot of shaky writing later in this episode. Morgan, for example, rashly tries to charge through an irradiated corridor to get to Teddy faster, only for Strand to point to a safer route up above… Which he then follows by breaking Morgan’s axe and throwing him to walkers! Uhhh… What? What exactly was Strand’s plan here?! Strand throwing Morgan into a situation that definitely should have killed him (and one that Morgan conveniently escapes off-screen while practically unarmed!), is positively head-scratching, especially when Strand treats it like a noble gesture that will preserve life. What the hell is Strand talking about here?! Frankly, the script probably just needed an excuse for Morgan to get the necessary keycard that eventually allows him and Strand to make it to Teddy. 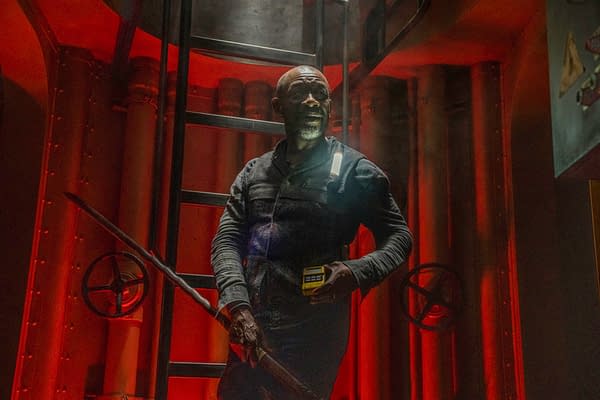 Likewise, Dakota’s heel turn and betrayal of Morgan’s community still isn’t working that effectively. Dakota ends up becoming the enemy agent that guards the way to Teddy in the end, wasting more time by holding Strand at gunpoint, and tediously mirroring the same exchange she had with John Dorie Jr., before Dakota shot and killed him earlier this season. Dakota hasn’t been around long enough for her betrayal to make a serious impact, and likewise, Morgan’s last-second intervention leads to Strand simply getting shot in the arm, which is an injury that Strand nonetheless inexplicably shrugs off. At this point, it feels like this episode was merely forcing obstacles in order to further delay Morgan and Strand, especially when both of them end up impractically surviving impossible situations that logically should have killed them.

Regardless, Morgan and Strand do manage to fight their way to Teddy at this point, but it’s too late. Teddy and Riley nonetheless manage to launch one missile, one carrying a series of warheads pointed at unknown targets. Morgan and Strand do ultimately prevent Teddy and Riley from firing any more missiles, handily explaining why Virginia and Nebraska don’t get nuked in Fear the Walking Dead’s sibling shows, but Texas nonetheless appears to be headed for nuclear devastation. Teddy does imply that the warheads could land in the water though, which definitely feels like the script leaving some wiggle room for the high likelihood of Fear the Walking Dead writing itself into a corner with such a seemingly definitive finish to Season 6. Still, credit where it’s due; This is a hell of a cliffhanger before next week’s season finale, as Morgan and his allies must likely reckon with a total destruction event that they’re helpless to stop. Well, except for Alicia, I guess.

“USS Pennsylvania” is a great episode in terms of sheer thrills, especially as the threats within the darkened, abandoned titular submarine get laid out in the opening sections. The script behind this episode can’t quite sustain the tension later on though, especially when Morgan and Strand both exercise some very questionable judgment in their shared race to try and stop Teddy and Riley, Still, this episode’s final result feels tragically fitting, leaving Fear the Walking Dead to try and solve a hell of a crisis during next week’s Season 6 finale. Or perhaps just let it happen. As I’ve mentioned, the fact that Fear the Walking Dead takes place earlier within AMC’s Walking Dead TV universe timeline can sometimes work against it, since this clearly indicates that Teddy’s campaign of global destruction doesn’t pan out. Teddy still stands as one of the most imposing and effective villains that Fear the Walking Dead has presented to date though, hopefully marking an especially great flourish for an especially great season, should this series successfully stick the landing next week.