Although Double Fine Productions has created, developed and released numerous interesting games, few stand out as being more original than their 2005 debut, Psychonauts. A quirky, colourful and downright unique action-platformer, it was perhaps ahead of its time. That’s because, despite winning awards for ‘Best Original Game’ and ‘Best Screenplay,’ and earning critical acclaim, the Tim Schafer-led title failed to achieve commercial success. That didn’t stop it from becoming a beloved cult classic, though; nor did it stop the game from having a bit of a resurgence as an Xbox Original and Game Pass title.

Sixteen years may have passed since the original released onto consoles and other platforms, but that hasn’t stopped fans from wanting and asking for a sequel. To their credit, both Double Fine and Microsoft listened, and the results of that decision are finally about to (hopefully) pay dividends. We say that because, during this very week, the long-awaited sequel, Psychonauts 2, is set to release. It comes bearing lots of expectations and tons of excitement, both of which are pouring out of fans who’ve waited a long time for a game that they probably thought they’d never get to play.

Now, the question switches from “Will Psychonauts ever receive a sequel?” to “Was Psychonauts 2 worth the long wait?” Well, friends, I can tell you that the answer to the latter question is a resounding yes! Psychonauts 2 isn’t just a good game; it’s a great one!

If you’re like me and haven’t really played Psychonauts, you needn’t worry. The developers were nice enough to include a visual recap of what happened in the original game. It’s admittedly weird and a lot to take in, but it does a pretty good job of getting one ready for the second game.

This colourful and incredibly original sequel begins as Raz and his fellow Psychonauts attempt to discover who a devious dentist has been working for. In an attempt to trick him, they mess with his mind and award him ‘Best Employee of the Year,’ then try to get him to reveal who hired him. Things don’t go as planned, though, as the dentist quickly changes things up by sending Raz into his dangerous, tooth and gum-filled, mind. This is not only an unnerving opening — especially for those of us who fear going to the dentist — but an excellent way to learn the game’s mechanics.

What follows is one of the most uniquely original campaigns in video game history. To say that Psychonauts 2 is unlike almost everything else out there would be understating it, because there’s simply nothing like this series anywhere. It’s its own beast, and a great one at that. 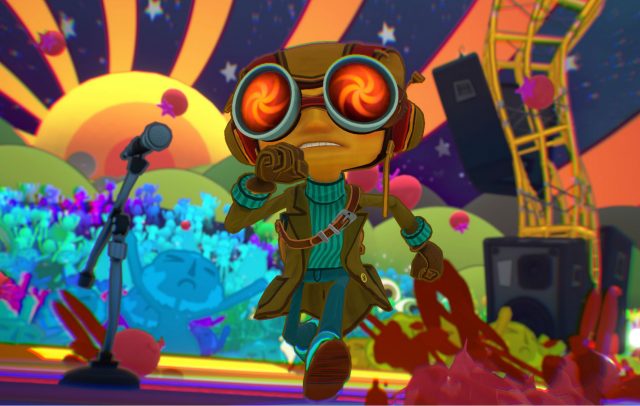 The general idea behind the game is that you’ll complete missions by venturing into others’ minds and learning what they know. Not only that, but you’ll also be tasked with helping these individuals; at least some of whom suffer from mental illness. For instance, you’ll enter your teacher’s mind and discover her fear of failure, which is mixed with anxiety, addiction and more. Then you’ll try to unravel her thoughts, help her do what she needs to do, and learn what she isn’t saying. All of the above is wrapped up in a casino themed design, which incorporates the best and worst that gambling has to offer, including some unique games that must be won to progress.

That’s just one of the lengthy and incredibly varied levels to be found in Psychonauts 2. There’s lots to explore, discover and traverse through in this game, and while a lot of things boil down to helping NPCs make the proper mental connections within their minds, the way this title handles it all is downright genius.

In fact, each new mission that Raz and company undertake presents the player with a new, colourful and somewhat challenging experience to platform and fight through. This is a game that never stops trying to outdo itself, too, so be prepared for the unexpected and the amazing.

That said, Raz doesn’t begin this adventure as a true member of the Psychonauts, despite thinking he’s already become one. No. Instead, our colourful hero finds that he simply doesn’t meet the official requirements, and is then sent to school to learn how to harness his powers, properly venture into others’ minds and the like. It’s there where he meets other interns, all of whom become an important part of this game’s zany cast.

Due to the above, you’ll find yourself traversing through the Psychonauts‘ headquarters on more than one occasion. There, you’ll be able to interact with important parties and random NPCs, see through their eyes to uncover hidden secrets, and even use rats to explore tiny and otherwise unreachable areas. If you take the time to do so, you’ll also uncover hidden keys, cards and chests within this hub. Not to mention mental currency.

When you’ve discovered ten cards and have enough money, you’ll then be able to approach a vending machine and combine the cards with a consumable to level up. In fact, ranking up is a pretty big part of this game, as is using earned and discovered currency to buy cosmetic upgrades, items and more. This includes purchasing items that can be consumed while in battle, in order to regain health.

You’ll be able to pick up added health during combat, but it’s limited. Certain enemies can pack a good punch, too, so it’s important to have added consumables on hand. This is especially true during the game’s creative and thoroughly entertaining boss battles.

Speaking of combat, it’s important to note that things are generally handled in a melee way. Raz can attack, dodge and platform his way to victory. However, other abilities also factor in, including the ability to lift and throw items like bombs, set things on fire, or shoot energy at foes. These are just some of the numerous PSI-powers you’ll gain access to and utilize throughout this relatively lengthy campaign. They will, however, take up some of your psychic energy, so make sure to give yourself an opportunity to regenerate it after use.

To be completely honest, I wasn’t too excited about Psychonauts 2. I thought that I would check it out on GamePass, but I wasn’t in a rush to do so. The game seemed too out there for me, and I hadn’t been able to get into the first one during the short period I’d played it for.

Boy, was I ever wrong.

When a review code arrived in my inbox, I hesitated regarding whether to redeem it and take this project on. I’m glad that I did, though, because Psychonauts 2 is one of the best games I’ve ever played. It oozes fun and creativity, and is also both genius and incredibly fun. Furthermore, it’s incredibly difficult to put down and step away from. These are, of course, all hallmarks of a great game.

Psychonauts 2 is simply one of the most wonderful, beautiful and engaging video games out there. There’s nothing like it on the market, and that’s a great thing. You have to play this thing, even if you missed the original.

Lastly, I want to give kudos to Tim Schafer and company, for the way in which they handled the difficult topic that is mental illness. They deserve commendation for creating a game that tackles such difficult subject matter with colour, personality and love. I’m also happy that they were thoughtful enough to include a warning at the onset, alongside information for those who are struggling. As someone who deals with severe depression and other forms of mental illness, this warmed my heart.

This review is based on the Xbox Series S version of the game, which we were sent by Microsoft.

Psychonauts 2 Review
Psychonauts 2 is an incredible game. From the onset it sets itself apart from its peers, and presents one of the most uniquely original and downright enjoyable campaigns in the history of this medium.
Visuals98%
Audio97%
Gameplay99%
Storyline99%
The Good Stuff
The Not-So-Good Stuff
2021-08-24
98%Overall Score
Reader Rating: (0 Votes)
0%