The Doom Patrol’s journey to overcoming their grief over Chief’s death hit an unexpected dead end during the previous episode, literally. “Dead Patrol” thus sees almost the entire team entering the underworld, after being killed by the late Garguax’s manservant, Samuelson. The exception, of course, is Larry, who finds himself cut off from his negative spirit, just in time to humourously receive the dead bodies of his friends in the mail at Doom Manor. With Dorothy returning at the same time, the two thus decide to seek help from the Dead Boy Detectives, a paranormal detective agency staffed by two ghost boys, and their living medium friend.

The Dead Boy Detectives originated under DC Comics’ Vertigo imprint, being one of multiple spin-offs derived from Neil Gaiman’s celebrated Sandman comic books. They’ve also been tapped to headline a potential new HBO Max series, which has already received a pilot order from the streamer. It’s currently unclear as to whether the potential Dead Boy Detectives series is meant to be a direct spin-off from Doom Patrol or not, though it does share executive producers, Greg Berlanti and Sarah Schechter, as well as Doom Patrol showrunner, Jeremy Carver in another executive producing role, seemingly suggesting that it will bear some connection to HBO Max’s established Doom Patrol series. Either way, “Dead Patrol” is clearly meant to showcase these occult characters at length, which it does very well for the most part, while also managing to deliver a fairly interesting peek at the afterlife of Doom Patrol’s Earth-21.

What’s also effective is how the afterlife helps to complete the team’s journey when it comes to moving on and regaining a sense of self fulfillment, following the Chief’s death. Larry and Rita are the exceptions here, first because Larry is obviously still alive, and second because Rita strangely isn’t affected by the magic of the underworld, leaving her fully aware and outside of purgatory the whole time. This season definitely appears to be teasing a major twist with Rita, one that appears to bear some connection to Michelle Gomez’s mystery woman, but that’s an issue for later. At this point, Rita’s lucidity thankfully allows Larry to team up with the Dead Boy Detectives to get his friends back, while Dorothy talks to living medium, Crystal Palace about the pain of losing parents, and being a strange presence in a mundane world.

The idea of the team’s individual purgatories manifesting as a surprisingly heartwarming reunion with certain lost family members, including Cliff’s father, Jane’s grandmother and Vic’s mother, is initially very interesting, and delivers some outstanding character moments, even if Cliff’s purgatory inevitably turns hostile. It’s too bad however that many of these interactions hit predictable notes, especially when the team is inevitably pulled out of their purgatories prematurely. It also feels like the team inexplicably avoids more than a few otherworldly attacks that logically should have finished them off, which may be done intentionally for humour’s sake, but it does still seem to indicate that the afterlife system of Earth-21 is surprisingly easy to circumvent, especially when the Dead Boy Detectives both did that in their own ways over a century ago. 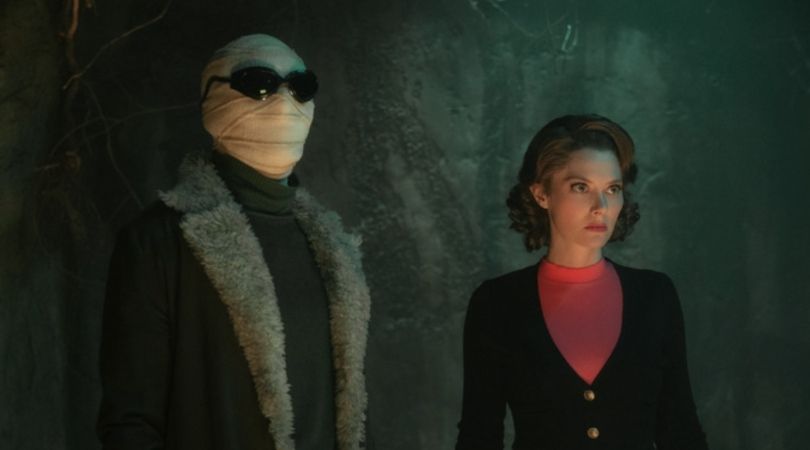 The characters of the Dead Boy Detectives themselves, Charles Rowland and Edwin Paine, do pair well with Larry though. Larry’s journey through the afterlife feels much more treacherous and exciting in contrast to that of his friends, and it gets even better after Larry learns that Edwin may be homosexual, and may have feelings for Charles. You learn just enough about the background surrounding both Edwin and Charles through moments like these, without the narrative giving away all of the juiciest details surrounding how the boys have maintained their strange state of half-life. This certainly presents some great promise for the Dead Boy Detectives’ own potential HBO Max series to come. Larry’s connection with Rita is also smartly utilized through the Dead Boy Detectives here to boot, allowing Larry to be a logical conduit that gets through to Rita’s displaced consciousness, eventually allowing everyone to escape by rowing back down the River Styx.

It’s here that this episode takes another baffling turn, albeit one that could present some intrigue in the future, if the Dead Boy Detectives series does get picked up, and does end up being a direct spin-off from Doom Patrol; Dorothy decides that she needs to figure out some things, and in the process, she opts to leave Doom Manor with the Dead Boy Detectives. It’s understandable that Dorothy’s current story arc is logically finished at this point, though Dorothy’s exit still doesn’t feel effectively justified. In fact, Dorothy leaving Doom Manor feels even more contrived when you recall that the Candlemaker story arc from last season ended up being blatantly cut short, seemingly suggesting that there was some significant character material that was meant to play out for Dorothy before her departure from Doom Manor, material that we’ll never see now.

Regardless, the void left by Dorothy is quickly filled by Michelle Gomez’s amnesiac driller, who casually walks downstairs into Doom Manor’s kitchen once everyone is back to life, and Dorothy has departed alongside the Dead Boy Detectives. The Doom Patrol are thus given their latest major task for the season, now that they’ve finished their journey through death and back, and it looks to be an exciting one! It’s even more exciting for DC fans, who likely already know the identity of Gomez’s character, though probably not how Rita appears to be connected to her presence in the Doom Patrol universe.

“Dead Patrol” isn’t always all it could have been in terms of properly setting Season 3’s events into motion, but it does present an entertaining introduction to the Dead Boy Detectives, even if Dorothy abruptly leaving alongside them feels like a bit of a stretch. On that note, even if Earth-21’s purgatory angle gets a little tedious after a while, it’s nonetheless fulfilling to see the formerly dead Doom Patrol members find their way back to inspiration and purpose, even though the Chief is, well, not exactly ‘dead’ anymore. Perhaps we’ll finally see what mad occult science Willougby Kipling is up to with the Chief’s severed head next. I imagine that it will be something memorable at the very least!