Despite having escaped the underworld, Doom Patrol’s eponymous heroes continue to be greeted by ever-growing complications. “Undead Patrol” once again brings the plight of death to the team, albeit in a very different, more comical way. This also ties in with the group learning about Michelle Gomez’s amnesiac mystery woman, who forcibly enlists the Doom Patrol to try and help uncover her identity, after one of her only lingering memories points her to the late Chief. Meanwhile, Chief’s severed, desecrated head has been stolen by Willoughby Kipling, in a last-ditch effort to get the attention of Baphomet, something that ends up being a blessing in disguise after the Doom Patrol’s latest issues become apparent.

The ultimate payoff in, “Undead Patrol” is pretty fantastic, both in terms of comedy, and teasing yet more exciting developments for the remainder of this season. Unfortunately, this episode’s narrative takes a while to get to that payoff, and its first half can be quite a slog as a result. It mostly consists of circular arguing surrounding Michelle Gomez’s mystery woman, whom Rita eventually decides to call, “Shannon”, as well as Vic yet again butting heads with his father over the mystery of his cybernetic rebirth, only for this tease to once again go nowhere for now. Vic frustratingly continues to be the most inconsistent Doom Patrol character, even in Season 3, likely because he’s not part of this team in other DC media, an issue that can leave Vic sometimes feeling too disconnected from the superior material surrounding his Doom Patrol teammates.

Vic and Silas once again being in a tired spat is small potatoes compared to Larry continuing to suffer without his negative spirit however, and Cliff continuing to defy his apparent tremors and health issues. In fact, the entire Doom Patrol eventually comes to suffer some significant health issues in this episode, after their skin begins to peel, and they begin insatiably craving human brains. It took an extra week (at least outside of our native Canada, where this episode makes a great double bill with the belated debut of Doom Patrol’s third Season 3 premiere episode), but we finally get to see some more hair-raising consequences following the team’s trip to the afterlife; The mysterious vomit that was cast upon them by Death’s servant has slowly turned them into zombies, albeit zombies that can still understand one another through their grunts and roars. Also, no, I don’t know why this zombie vomit affects Larry, who was merely astral projecting into the underworld, and logically should not have been susceptible to the vomit, but whatever. Larry would have nothing worthwhile to do if he couldn’t join the undead fun here anyway. 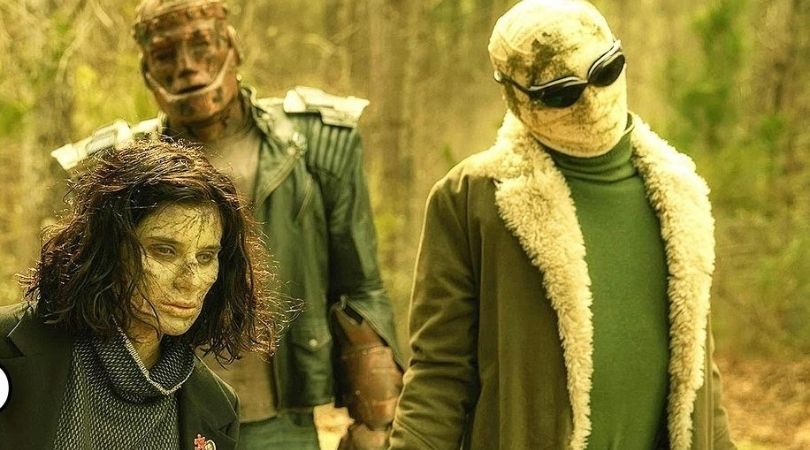 Once the Doom Patrol is finally zombified, just in time for Willoughby to show up at Doom Manor with another Chief-related issue, “Undead Patrol” finally gets going, delivering a much more entertaining and hilarious second half. While it happens off-screen, Willoughby nonetheless comes to report that Chief’s head has been stolen by Darren Jones, the former head of the Bureau of Normalcy. Willoughby thus needs to enlist the Doom Patrol’s help to get the head back.

This is also around the point when a hidden film reel reveals Michelle Gomez’s character identity, at least to DC fans that weren’t informed of it in advance, or didn’t guess it already; Gomez is portraying Laura de Mille, a.k.a. Madame Rouge, a shapeshifting enemy of the Doom Patrol in DC Comics lore, and one who is affiliated with the rebranded Brotherhood of Evil, the Brotherhood of Dada. In the Doom Patrol universe however, the Brotherhood of Dada has been gender-swapped, instead being presented as the ‘Sisterhood of Dada’, with one of its other noteworthy members, Byron Shelley, a.k.a. The Fog, being presented on the film reel as a woman named Shelley Byron instead. I imagine this will be better explored in later episodes.

I also have to mention that, even before she discovers her character’s true identity, Michelle Gomez is quickly stealing this latest season of Doom Patrol and running with it. Laura is equal parts eccentric, vulnerable and imposing, and Gomez’s delivery is all over the map with her, in a good way. It’s reflective of the fact that, as a shapeshifter, Madame Rouge’s identity is constantly in flux in DC Comics lore, a trait that should eventually make its way to her live-action TV portrayal here. Fortunately, Laura quickly gets pulled along with Willoughby and the zombified Doom Patrol to grab the Chief’s head back from Jones as well, who has apparently been turned into a ‘were-butt’, following Season 1’s hysterical ‘butt monster’ attack on the Bureau of Normalcy’s ‘Ant Farm’ facility.

The were-butt horde leaves this episode’s climax to be played completely for laughs, and it works very well, especially with the Doom Patrol being in a zombified state. At least one were-butt, probably Jones, does manage to escape though, seemingly carrying the zombie plague to Cloverton, as revealed by a brief mid-credits scene. In any case, with Chief now getting one last moment to interact with his team, following his rescue from the were-butts, he volunteers his own brain to save them, since eating human brains actually cures zombification immediately in the Doom Patrol universe. This gesture is successful, and it leaves the Doom Patrol returned to (relatively) normal, though at the cost of Chief now seemingly being permanently dead and gone, for real this time.

Chief’s apparent final demise would appear to leave the Doom Patrol back in a state of grief and shock, though Laura being among their ranks for the time being should hopefully pull them into another distraction before long, especially after the film reel Laura discovers appears to show Rita in the background, seemingly confirming Rita’s teased association with the Sisterhood of Dada. “Undead Patrol” may waste too much time plodding along in circles during its first half, but it’s difficult to be too upset with it after its second half proves to be comedically and creatively outstanding. With Season 3 now approaching its halfway point as well, the newest obstacle to the Doom Patrol, the Sisterhood of Dada, also appears to be coming into focus, to strong effect. Chief may be gone for good at this point, or so it would seem, but there’s still plenty for the Doom Patrol to keep busy with, even though Cliff and Larry seem to be in especially bad shape lately, and Rita may in fact have her own stake in whatever the Sisterhood of Dada is getting up to.

Doom Patrol 3.4: "Undead Patrol" Review
Doom Patrol balances a dull first half with a hilarious, rewarding second half in, "Undead Patrol", as the team find themselves turned into zombies, right as an old foe returns.
THE GOOD STUFF
THE NOT-SO-GOOD STUFF
2021-10-12
82%Overall Score
Reader Rating: (0 Votes)
0%