It’s back to the Commonwealth on The Walking Dead, and I can’t say I’m unhappy about that! The show still failed to perfectly balance its trio of storylines in, “Promises Broken”, but we did also see an improvement to the narrative consistency nonetheless, seeing as we got two good storylines out of three in this episode, rather than the previous episode’s good core plot and duo of weak subplots. Predictably, the Reapers continue to be the weak link in The Walking Dead’s final season up to this point, though fortunately, this week’s Commonwealth and Maggie/Negan storylines also do the bulk of heavy lifting, leading to a fairly satisfying episode overall.

I don’t know why, but the show really doesn’t know what to do with Daryl and the Reapers during this season’s first eight episodes. Daryl yet again bumbles around aimlessly in this case, being tasked with Leah to go look elsewhere for any sign of the Wardens. Instead, the two find a desperate man who is looking to help his dying wife, leading to Daryl and Leah eventually finding the man’s wife and son. Leah decides to show mercy, despite Pope’s kill order, and Daryl euthanizes the wife at her request, allowing the husband and son to escape. This isn’t completely dull as far as Reaper plots go, but it’s still just going through the motions, and not effectively playing with viewers’ expectations. It also doesn’t help that Pope remains a frustrating, ineffective leader to the Reapers, screaming orders and acting hysterical, rather than genuinely commanding a sense of menace that Daryl would logically fear.

This is why it’s a good thing that this episode wisely doesn’t spend too much time focusing on its Reaper storyline. The majority of plotting in this case instead revolves around the Commonwealth, which Eugene, Yumiko, Ezekiel and Princess remain trapped in for now. Yumiko has at least managed to secure an audience with the Commonwealth’s leader, Pamela Milton, but Eugene, Princess and Ezekiel, alongside Stephanie, have to pay a ‘fine’ for their unlicensed equipment use after trying to contact Alexandria without authorization. This leads to the group having to clear out walkers as a means of repaying the Commonwealth for their crime, something that eventually leads to two pretty mixed surprises.

The first of these is Ezekiel’s allegedly cancerous tumour being rather quickly sorted out by the Commonwealth’s doctors. After Ezekiel’s condition begins to deteriorate while walker clearing, Hornsby takes him away and fixes him up, basically leaving Ezekiel good as new. This might initially feel a bit unsatisfying, but it also carries the inspired implication that Ezekiel now won’t want to leave the Commonwealth. This is an issue that Eugene also exacerbates after rushing to save a young man and his oblivious girlfriend from walkers (ah, I see that good old selective deafness is alive and well in AMC’s Walking Dead TV universe!), eventually leading to the blatantly disagreeable young man provoking Eugene into punching him. This leads to Eugene getting arrested because, whoops, this guy happened to be Pamela Milton’s son. This altercation also inadvertently costs Yumiko her audience with Ms. Milton, naturally. 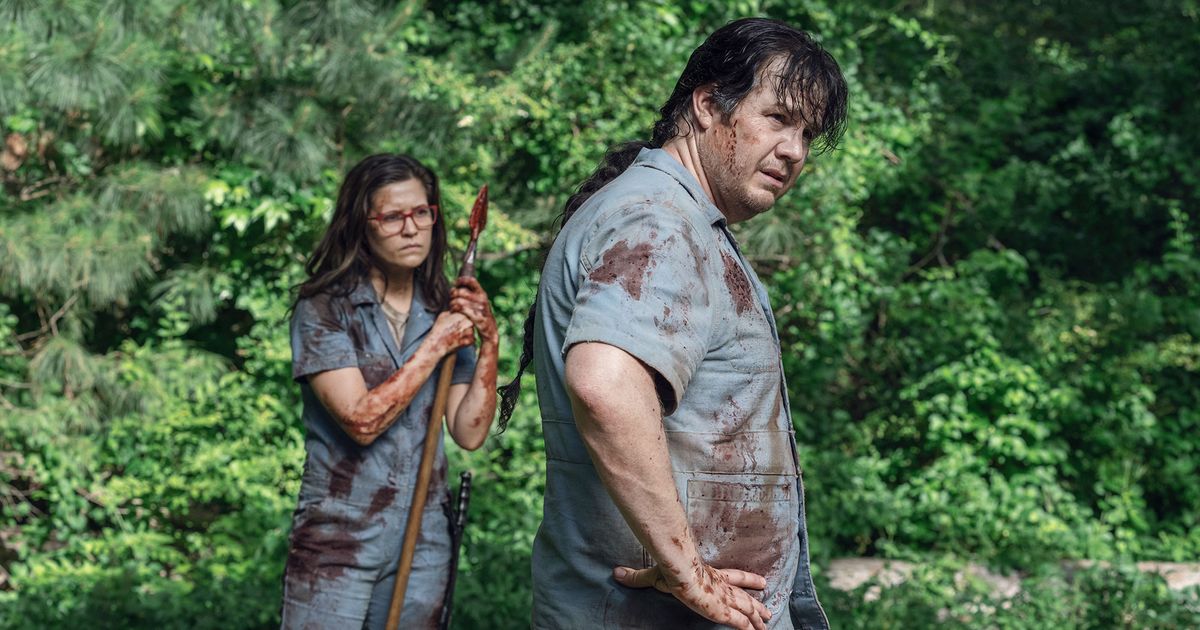 I have to say, The Walking Dead is really doing a great job of balancing both the pleasantness and sinister underbelly of the Commonwealth so far. The Commonwealth continues to help the series feel exciting and unpredictable in its final season, particularly when Eugene is thrown in prison, and left with no choice but to surrender Alexandria’s location in exchange for the protection of his friends. This finally points the Commonwealth towards The Walking Dead’s other lead survivors, no doubt setting the stage for the next third of the show’s final season in 2022. While we don’t immediately see a payoff to Eugene’s treachery, it is a nice callback to Eugene’s former cowardice and opportunism from earlier seasons, albeit this time framed through a more well-meaning image that could nonetheless spell big trouble for his already-struggling home community.

Speaking of trouble, Maggie and Negan headline an equally strong subplot in this episode, engaging in something of a heart-to-heart over their difficult history. This interaction is fueled by the discovery of re-animated Wardens that were left by the Reapers, leaving Maggie to grieve over her failure to protect her former community. Negan attempts to sympathize after recalling losing the Saviors, but Maggie seems initially unmoved. Fortunately, Negan nonetheless proves useful anyway, after teaching Maggie how to herd walkers, Whisperer-style. This spurs Maggie’s surviving group to put together a huge herd of walkers, some consisting of Wardens that Maggie and Elijah used to live with (including Elijah’s dead sister), and pointing them straight toward Pope and the Reapers! Considering that the Reapers haven’t been very appealing as villains at this point, it could at least be a great consolation prize to see Maggie take them out with an entire walker herd, as if she’s embracing her own inner Alpha in a twisted way. We’ll have to see if this plan actually works in the following episode, but something tells me it almost certainly will! The question is then, where would this chaos leave Daryl and Leah?

“Promises Broken” leans into the usual strengths behind The Walking Dead’s final episodes up to this point, but the extended focus on the Commonwealth proves especially beneficial here, as does the standout dialogue moments between Maggie and Negan. Negan appropriating and exploiting the Whisperers’ tactics against the Reapers is also very promising, continuing to demonstrate how Alexandria further evolves and becomes ever more resourceful after every hostile community that they prevail against. It’s just too bad that the show’s Daryl/Leah subplot continues to be such a bore, especially when the Reapers still don’t feel like an interesting or credible threat. Fortunately, with a walker herd now being primed to take out Pope’s tedious group of baddies, and the Commonwealth finally being directed to Alexandria by Eugene, 2022’s upcoming batch of The Walking Dead episodes can hopefully fully shift the show’s final season narrative to where it’s best served; The Commonwealth, and all of the inevitable dangers it will bring to Alexandria with it.