The second half of The Walking Dead: World Beyond has arrived, whether we like it or not. AMC’s second Walking Dead spin-off series pretty much sunk like a lead balloon after its first season aired last year, being met with apathy from critics, and outright scorn from fans. This is due to a variety of reasons, between the series nerfing the otherwise hazardous, psychologically brutal world of the Walking Dead universe, building itself around juvenile, pretentious writing and direction that took the vapid storytelling way too seriously, and overall failing to justify this show’s very existence. Compounding these frustrations is the fact that The Walking Dead: World Beyond’s lead characters and performances are actually pretty good. They’re just stuck in a painfully boring, contrived series that sullies The Walking Dead’s name.

Unfortunately, not much has changed with the start of The Walking Dead: World Beyond’s second and final season either. “Konsekans” picks up immediately after the conclusion of the first season, with Hope being flown off to New York alongside Elizabeth and Huck/Jennifer, while Iris and Felix reunite with Will. Elton and Silas meanwhile are completely MIA in this season premiere, though in fairness, we already know that Silas at least has been captured by the CRM. Jennifer later mentions that Silas has been tortured for information as well, but refused to give anything up. Man, I miss Silas. He’s a much better character than this show deserves.

So, what happens in this season premiere then? Well, not much of note, unfortunately. The Walking Dead: World Beyond is still taking every opportunity to drag itself out, clearly not having enough meaningful storytelling to span twenty episodes and two seasons. Thus, we spend much of this premiere episode following Hope on an aimless mission, after Elizabeth releases her to find her own path within the CRM. This first involves lying to Hope and flying her to Albany instead of her father, where she can glimpse the ruins of the city, before Elizabeth allows Hope to run free, hoping that she’ll realize she has no choice but to join with the CRM.

Okay, putting aside the fact that this is an extremely stupid, reckless plan, one that needlessly puts Hope’s life at risk, despite her massive importance to the CRM, Hope wandering around aimlessly is not interesting. Obviously she’s not going to get far without her friends, and after she eventually wanders into a school, she gets ambushed by a walker and hits her head. This is the show’s excuse to make Hope hallucinate and randomly teleport around, seemingly with Jennifer and Elizabeth stalking her, and keeping her clear of walkers. Oh, and Hope also sees a missing girl that she briefly fights with, eventually throwing the girl into walkers… Only the girl isn’t actually there? Except Jennifer and Elizabeth are, but Hope never sees them? Huh?! Are the writers even trying anymore?! What the hell is happening?! 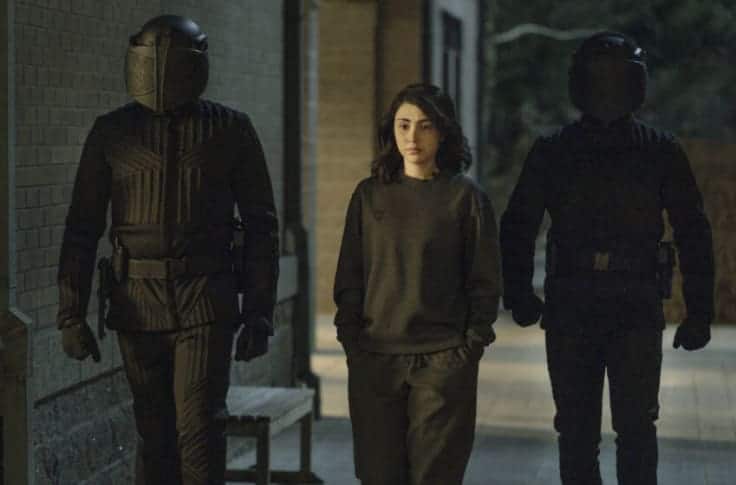 Alright, so, inevitably, Hope submits to the CRM, is eventually reunited with her father as promised, and that’s where we leave her. Fortunately, Iris and Felix at least headline a more interesting subplot in this season premiere, whereupon they’re placed with a new group called ‘The Perimeter’. Apparently, this group has an agreement with the CRM to clear walkers and lead strangers away from the CRM’s territory, in exchange for neutrality and supplies. This is actually a solid idea, one that actually does something interesting, and digs into the CRM’s influence on outside communities, something that The Walking Dead: World Beyond has constantly and infuriatingly failed to examine. The closest we’ve come before now is listening to Jennifer talk about her military career, and how her perspective has changed following her time with the CRM. Oh, and speaking of Jennifer, she remains an especially interesting character on this show, and unlike Silas, we actually get to see her in this episode, marking another bright spot in what’s otherwise very frustrating, dull storytelling.

I’m also intrigued at the prospect of a potentially dark turn for Iris, following last season’s events. While Felix and Will impotently argue about the prospect of exploring CRM territory, Iris simply takes it upon herself to do so, eventually encountering a CRM soldier. The two then have a bit of a scuffle, and in the process, Iris manages to critically wound the soldier, at which point she announces that she knows the CRM destroyed Campus Colony and Omaha, not walkers. Iris then completes this declaration by stabbing the soldier dead, a powerful note to end this episode on. Finally, a character on The Walking Dead: World Beyond is thinking more like a survivor, and actually doing the kind of morally questionable things that often define highlight drama in the Walking Dead franchise! Let’s hope Iris can keep up this intriguing new direction in the weeks ahead!

I suppose that The Walking Dead: World Beyond could potentially further tighten its storytelling during the rest of its final season, now that Jennifer’s treachery can be explored, Iris is becoming more of a brutal character, and we’re finally seeing how CRM influence is shaping smaller communities, a previously baffling plot hole in this show’s narrative. For now though, “Konsekans” sadly maintains a lot of the issues that have constantly ruined The Walking Dead: World Beyond’s potential. This second season premiere is still dull, still ploddingly paced, and still trying way too hard to seem deep and avant-garde, which only makes it more confusing and sloppy. Like I said repeatedly during Season 1, there’s still time for this series to improve, but with Season 2 not appearing to make significant improvements in its early stretch so far, I’m left to wonder if this entire spin-off was just a bad idea. At least we have the promise of the main Walking Dead series’ Jadis/Anne showing up later this season though, finally giving The Walking Dead: World Beyond an actual link to AMC’s larger Walking Dead TV universe. Hopefully, at the very least, that link can help this struggling series eventually feel like something more than a superfluous waste of time.

The Walking Dead: World Beyond - Final Season Premiere: "Konsekans" Review
The Walking Dead: World Beyond continues to flounder with the start of its second and final season, as Hope is sent on a futile mission to survive, while Iris decides to take the fight directly to the CRM.
THE GOOD STUFF
THE NOT-SO-GOOD STUFF
2021-10-13
60%Overall Score
Reader Rating: (0 Votes)
0%