When it comes to horror, few writers are more unique than Stephen Graham Jones, who brings a different type of voice to the genre. Of course, there’s the fact that Mr. Jones is Native American, and how his books often involve those from his own culture, but it’s more than that. His way of writing is so different from almost any other author I’ve ever read, and it’s that which I’m really trying to get at here. Don’t get me wrong, though: I appreciate the look into Native culture as well.

Last time I reviewed something by this author, it was The Only Good Indians, which marked my first time reading anything by Stephen Graham Jones. Although it took me some time to get into that particular book, I ended up liking it quite a bit and found it easy to recommend to those with patience, and those who were looking for something original. Now I’m back to talk about his latest novel, My Heart is a Chainsaw, which we were provided by its Canadian publisher.

My Heart is a Chainsaw centres upon Jennifer ‘Jade’ Daniels, a Native American teenager of seventeen years of age. Living in the small and wooded town of Proofrock, Idaho, she finds herself bored and taken advantage of by a drunken father who shouldn’t be responsible for children. It’s Jade’s love of horror movies — particularly slasher films — that gets her through her crappy teenage existence, along with looking forward to the day she will leave the area behind.

As someone who views slasher movies as her own, personal religion, Jade is a girl whose head is stuck in the clouds. She’s constantly thinking about final girls and villains, as well as the unique back stories of some of horror’s best and lesser known villains. This carries over into her school work; particularly state history papers that she handed into her favourite teacher, and somehow received credit for. These chronicle the history of slasher movies, as well as important tropes like final girls and pranks, specific requirements and everything to do with a slasher cycle.

These short essays appear at the end of many chapters, giving us more insight on the subject. One I happen to be pretty familiar with, having grown up watching and loving slasher movies as well. Not to Jade’s extent, though, as she’s in a completely different stratosphere. 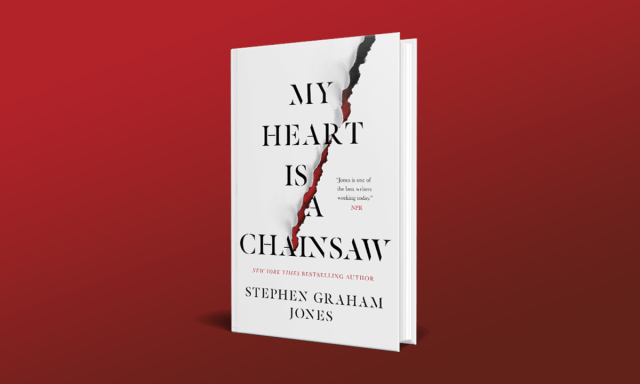 It’s obvious that Stephen Graham Jones loves slashers, though he likely also did some research before writing. It’s either that, or he has an incredible memory that is far superior to my own. Some of the many facts and pieces of trivia found within My Heart is a Chainsaw were honestly new to me, and I appreciated learning more about one of my favourite movie genres along the way.

This story actually picks up as two Danish backpackers stop at the shores of Indian Lake in Proofrock, Idaho, to take a break from their cross-country road trip. It’s early morning and nobody else is awake, so the couple strip down and decide to go skinny dipping, before finding a canoe and using it to paddle out onto the lake. It’s then that the proverbial shit hits the fan, as they both die gruesome deaths. Their killer, however, is not shown or described.

We then meet Jade, whose orange and ruined hair has created yet another argument at home. She decides to run away, opting to freeze to death as a way of showing her father up, but ends up finding the same canoe and slitting her wrist instead. She’s thankfully saved by a local construction worker and the sheriff, and is sent away to recover for a period of time.

When Jade returns, she notices that little has changed, except for the fact that the houses going up across the lake are continuing to progress well towards completion. These mansions are owned, and being funded, by the Founders. Who are they? Well, they’re basically the Mark Zuckerberg, Bill Gates, Jeff Bezos and Donald Trump of this fictional world. They’ve all come together to build an exquisite gated community in what was once National Forest land.

This is important, because one of the Founders has a child named Letha, who Jade attaches to. She opines that Letha would make the perfect final girl, and starts to believe that a slasher cycle is about to begin within Proofrock. However, nobody believes our young heroine, as is usually the case. This doesn’t deter her, though. Not at all.

You see, Jade has noticed the signs, and has found cellphone video of the attack on the Danish travellers. She knows something is up, but doesn’t know who’s to blame. Is it one of the Founders? A new monster? Her drunken dad? Or something else? She’s pretty sure it has something to do with the upcoming Fourth of July festivities though.

I know that this will likely sound like a ‘badass’ book to most horror fans, especially those who grew up watching slasher movies like myself. After all, it spoke to me, too. That said, I didn’t end up enjoying My Heart is a Chainsaw as much as I’d hoped, because it took about three hundred pages to really get going.

I’ve gone on record before, to say that I don’t mind slower stories, and the same is true of great character development. However, My Heart is a Chainsaw takes these things to an extreme. While I respect that the book is supposed to be a character study of Jade, little happens until around page 300, and then it’s full speed ahead with too little explanation. If this novel had been paced better, it would’ve been more effective and more enjoyable.

Still, it’s a solid read, and is pretty well written. You’ll learn a lot about slashers, will perhaps identify with Jade, and will read something different from the average book. Just don’t expect tons of action; at least not until close to the end of the story.

This review is based on a copy of the book that we were provided with. Thank you to NetGalley and its publisher. Receiving a free copy did not sway our opinions.