NOTE: Some spoilers from throughout the second and final season of, “The Walking Dead: World Beyond” are present in this review

AMC has a Walking Dead problem. Never has that been more apparent than with The Walking Dead: World Beyond, a young adult-oriented spin-off series that was retroactively converted into a limited series, following its initial two-season pick-up at the cable network. The series’ first season was widely considered to be a failure as well, receiving negative fan feedback, and middling-to-negative critical reception. At least a two-season commitment gave The Walking Dead: World Beyond a chance to turn things around though, and at the start of its second and final season, it did appear to be slightly improving. There were more stakes, the characters had become more vulnerable, and the true scope of the threat behind the Civic Republic Military was finally starting to come together.

This lasted for about three episodes. Beyond that, The Walking Dead: World Beyond’s second and final season fully regresses back into becoming a pretentious, superfluous bore. The series’ ultimate resolution simply serves as a trailer for future Walking Dead spin-offs that no one asked for to boot, with nothing of value ultimately being achieved in the end. Beyond the return of one key character from the main Walking Dead series, The Walking Dead: World Beyond doesn’t offer any kind of satisfying or necessary expansion to AMC’s Walking Dead TV universe, plus it fails to get viewers excited for future projects in said TV universe. The series also naturally faceplants when it comes to grooming a newer, younger audience to keep being invested in the diminishing returns of AMC’s Walking Dead TV canon.

Easily the worst crime of The Walking Dead: World Beyond however, one that frustratingly persists throughout its final season, is that the show is so incredibly dull. This is all the more egregious for a series that’s blatantly trying to pander to teenagers, despite having a TV-MA rating, and being primarily hosted on a 30-plus-skewing cable network that most teenagers don’t watch. Yeah, who exactly is The Walking Dead: World Beyond supposed to be for? That question isn’t answered even during its latter ten episodes, which barely feel like a Walking Dead show anymore, what with the bulk of storytelling being set within the protected walls of the CRM’s New York complex, and its neighbouring communities. Oh, sure, there are still walkers featured every now and again, but the undead almost feel like an afterthought by this point, as The Walking Dead: World Beyond instead trips over itself to try and go all in on the CRM as an overarching, Thanos-level threat for their future Walking Dead projects.

So, what exactly happens during these final ten episodes for The Walking Dead: World Beyond? Well, not much of consequence, to be honest. The lead characters spend most of the season arguing, plotting and talking in circles, and that’s even true of the villains, who only get so many chances to actually present a viable threat to the protagonists. The one refreshing exception on this note is Jadis Stokes, the sole carryover character from AMC’s flagship Walking Dead series. Jadis apparently used the critically wounded Rick Grimes to buy her way into the CRM, as revealed late in the season, where she rapidly advanced to become a legitimately imposing and clever antagonist. Problem is, Jadis doesn’t arrive at the CRM complex until the latter half of the season, and even then, she’s often held back by distracted plotting that’s constantly telling, not showing. Oh, and of course we don’t get a chance to reunite with Rick during this season, because why would we? That might have made The Walking Dead: World Beyond a bit interesting, and obviously that’s not what the show was going for. 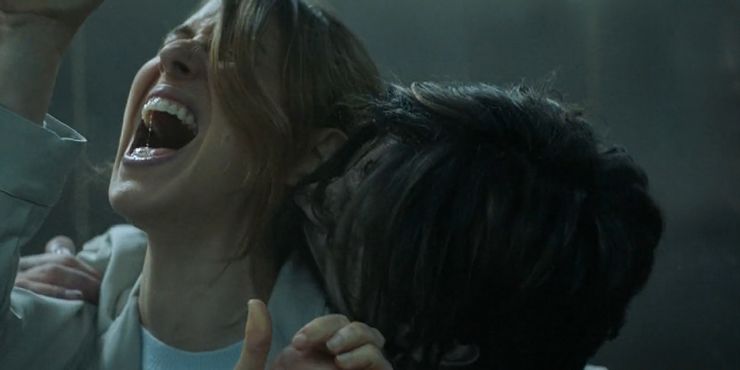 In all seriousness, the show’s protagonists do get some decent story turns here and there. The leads themselves remain good characters overall. They’re just constantly stuck in bad storylines. Among some of the more noteworthy plots are Huck bouncing between loyalty to her former Campus Colony allies and her CRM boss mother, Elizabeth, Felix getting a chance to reunite with his lost partner, Will, and Silas getting in on a walker-clearing racket with Huck’s estranged husband, Dennis. There’s also an interesting leader featured for an artistically-inclined community called the Perimeter, one that’s forced to depend on the CRM due to requiring live-saving dialysis treatments that only Elizabeth, and later, Jadis, can provide, while the Perimeter is also forced to shelter Elton. In a better Walking Dead show, that could have created a very compelling conflict.

Hope and Iris meanwhile, despite ostensibly being The Walking Dead: World Beyond’s lead characters, have virtually nothing to do but chase boys and be angsty about the CRM during these final ten episodes. Elton is even worse off during this season to boot, with his character quickly being made pointless during most of the season, often due to being cut off from its core plot, except when the narrative mandates that Elton be present so it can fill a space in the protagonist roster. Adding insult to injury here is that the show’s ending line suggests that Elton was the one supposedly learning a lesson about being hopeful during the walker apocalypse. Because The Walking Dead is about optimism and loving life, apparently. Didn’t you realize that throughout two other Walking Dead shows, a whole saga of Walking Dead comic books and a series of Walking Dead video games that are almost entirely built on grit, violence and misery?

To its credit, The Walking Dead: World Beyond does feature a few nicely grisly walker kills during its final season (Lyla’s brutal demise at Jadis’ hands is a nice, bloody highlight!), but even the season’s action scenes often feel disappointingly limp. The protagonists’ confrontations with the CRM, the ones that turn actively hostile in particular, only serve to make the CRM look nerfed and incompetent, because these scrappy young would-be heroes shouldn’t logically stand a chance against them. Even the season’s climactic ‘heist’ to escape the CRM complex, and deliver evidence that the CRM are imminently going to murder the Nebraska colony, because the CRM are the bad guys, I guess (there’s a big speech about how killing the colonies saves Civic Republic resources and accelerates progress, but the whole point of the Alliance of the Three was supposed to be facilitating a refreshed economy that does exactly that, so I’m not exactly sure why this is a good plan?), is oddly devoid of real thrills. Even the climax’s handful of character deaths barely register by this point, because it’s tough to invest in characters that frequently feel stuck in conflicts that don’t make much sense.

Ultimately, The Walking Dead: World Beyond feels like a bad YA novel that’s been awkwardly crowbarred into AMC’s Walking Dead TV universe. I can respect its desire to try and take the franchise’s TV canon in a new direction, but considering the equally sub-par second and final season that The Walking Dead: World Beyond farted out, it’s not unfair to declare this spin-off series a failed experiment. A post-credits stinger for this season serves as a fitting final insult as well, creating variant walkers that are suddenly fast, intelligent and more human-like, and thus violating several of the core tenets behind the Walking Dead franchise’s eponymous threat.

The Walking Dead: World Beyond - The Final Season Review
The Walking Dead: World Beyond doesn't significantly improve during its second and final season, resulting in another dull, unfulfilling narrative that officially renders the series a failed experiment.
THE GOOD STUFF
THE NOT-SO-GOOD STUFF
2022-01-23
58%Overall Score
Reader Rating: (0 Votes)
0%