NOTE: Full spoilers for this episode of, “Superman & Lois” are present in this review

Superman & Lois has soared as the crown jewel of The CW’s Arrowverse continuity since its premiere last February. Refreshingly, the network has opted to maintain the show’s midseason placement as well, whereupon it was allowed to hold its sophomore season until this January, likely enabling a higher budget and scope once again. The series has also been paired with The CW’s freshly-debuting DC drama, Naomi on the same night, pretty much solidifying that Superman & Lois is the new big dog among the network’s DC shows, as well as the example that future expansions to The CW’s DC programming lineup will likely follow.

That’s certainly not bad news, as, “What Lies Beneath” maintains the same high standard of storytelling quality that made Superman & Lois’ first season such a standout among DC’s and The CW’s current catalogue of TV shows. It’s also a rather busy Season 2 premiere for this more mature-minded take on the Man of Steel, even after the threat of Morgan Edge/Tal-Rho, Zeta-Rho and the Eradicator have been neutralized. Since then, three months have passed, with the Kent boys preparing to begin a new school year, while the Cushing’s have repaired their strained family relationship, right as Lana works to endorse a promising new mayoral candidate.

As outwardly mundane as life in Smallville can initially seem at this point however, there are still some dangers lurking beneath the surface. While we don’t currently get to see exactly what specific threat and/or villains the Arrowverse’s Kent family will be up against this season, it’s clear that a new menace is developing from the shadows. This so far appears to be manifesting around a new character addition, Lieutenant General Anderson, who functions as General Lane’s replacement at the DOD. Anderson is just as eager to embrace and promote Superman as General Lane was previously, but he also appears to have his own agenda regarding where Clark’s attention should be while he’s in the cape and tights. Specifically, Anderson is pushing for Superman to be an openly pro-American presence, leveraging the god-like power behind one of the Arrowverse’s mightiest superheroes to promote national interests.

This is a fantastic foundation for a major conflict throughout Superman & Lois’ sophomore season, and the one that seems to rise highest in this season premiere. Certain darker DC Comics storylines, most notably celebrated graphic novel, The Dark Knight Returns, have explored the idea of Superman eventually becoming a puppet enforcer for the American government. The Arrowverse’s Superman is obviously rejecting this idea for now though, vehemently refusing to prioritize American political interests after he pulls a North Korean nuclear submarine out of certain doom, without Anderson’s approval. Still, the question of Superman’s future loyalty is definitely hanging in the air, particularly when Anderson is eventually revealed to be grooming his own team of Superman-like metahumans, who are younger, more impressionable, and no doubt more eager to present an all-American endorsement of Superman’s branding. 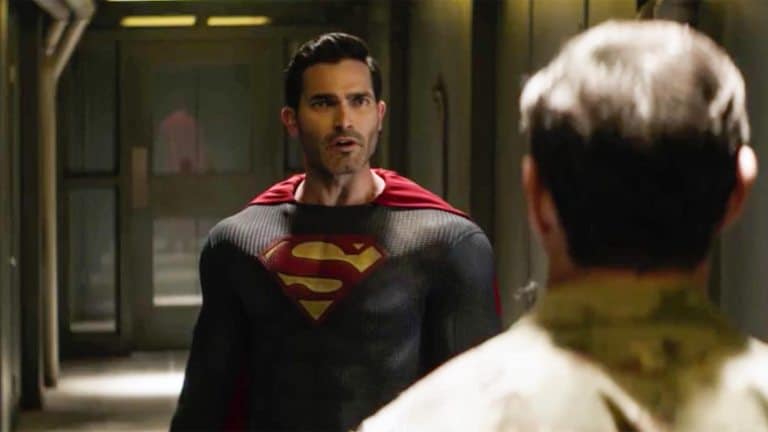 Despite this very promising twist at the DOD however, the majority of conflicts in this season premiere are nonetheless more grounded in nature, something that still manages to work surprisingly well. Clark and Lois face relatively normal family issues here once again, even while Clark struggles with Anderson’s agenda, as well as crippling visions that occasionally disturb him during saves. Chief among these family hiccups is Jonathan being caught about to have sex with his girlfriend by Lois, resulting in Lois also grilling Jordan about Sarah, despite Jordan’s relationship with Sarah seemingly becoming strained after Sarah goes to camp for a month. At the same time, Lois’ heightened emotions are also directed at a blatant dislike of any reporter candidate that Chrissy presents for the Smallville Gazette, with Lois believing that they’re all too popularity-motivated.

Lois in particular seems to have a lot on her plate at this point, with new layers to her intensity being effectively revealed as this episode goes on. Eventually, this all traces back to Lois freezing and feeling nothing when she was initially approached by Natalie Irons, who wasn’t then aware that Lois is a multiversal doppelganger of her dead mother. This in turn leads to Lois struggling with immense guilt, and later revealing to Clark that this guilt is based around her and her sister, Lucy being abandoned by their own mother many years ago. This is another very promising tease for what Season 2 of Superman & Lois may have in store, especially when the Lane family matriarch hasn’t often been a focus throughout Lois’ and Lucy’s portrayals in other DC media. It’s also a sensible, heartfelt reminder that for all she’s achieved, Lois can still feel overwhelmed and inadequate at times, which helps to nicely humanize her character.

Still, there are a few story elements that get lost in the shuffle during this season premiere. The Cushing family’s mayoral race doesn’t currently feel that interesting, for example, plus Lois’ and Chrissy’s issues at the Smallville Gazette quickly become buried by more pivotal plot developments. Even so, “What Lies Beneath” remains a superb season premiere for Superman & Lois in most respects. The series still takes its time with slower, more grounded storytelling, which may continue to irk some Superman Family enthusiasts that are looking for more action, but it’s still worth emphasizing that Superman & Lois remains The CW’s best Arrowverse show right now, as well as one of the best ongoing DC shows overall at this point. With a potential sale now looming over The CW as well, that narrative momentum is crucial, since a restructuring of the Arrowverse is probably going to be inevitable under a new majority stake holder, making it more important than ever for the remaining Arrowverse shows to justify their continued runs.