It truly seems like the love of cars is simply in some folks’ DNA. You either have it or you don’t, and those of us who don’t will never understand what draws people to car meets, auctions, NASCAR races and the pursuit of classics to restore. Those who do have it, though, truly love the vehicles that litter the world’s roadways every single day, and good on them. They’re a big part of the reason as to why Gran Turismo 7, and all of those which came before it, exists. After all, series creator, Kazunori Yamauchi is part of that particular club.

Needless to say, Gran Turismo 7 is a love letter to cars, and that’s something you should know from the onset. This is both for the better, and for the worst, because certain design decisions won’t appeal to the non-diehards amongst us. We’ll talk more about those soon, though.

As someone who grew up gaming in the 90s, Gran Turismo was something fresh and new. Before its release on the original PlayStation back in late 1997, we hadn’t seen anything like it. At least, I don’t remember playing or even looking at another sim the likes of what Sony released. It was impressive, beautiful and downright obsessive, and felt both realistic and mind-blowing at the time. That was just the beginning of a series that has persisted for almost 25 years now, and is still going strong on Sony’s fourth and fifth PlayStations.

For the most part, Gran Turismo — as a series — has aged like fine wine. Over the years, it’s continued to build on the love of cars that fills its heart and resides within its proverbial soul. Incredible advancements in visual technology have certainly helped, as have advancements in sound design, controllers, televisions and video game development as a whole. As such, the games have never looked or sounded better. 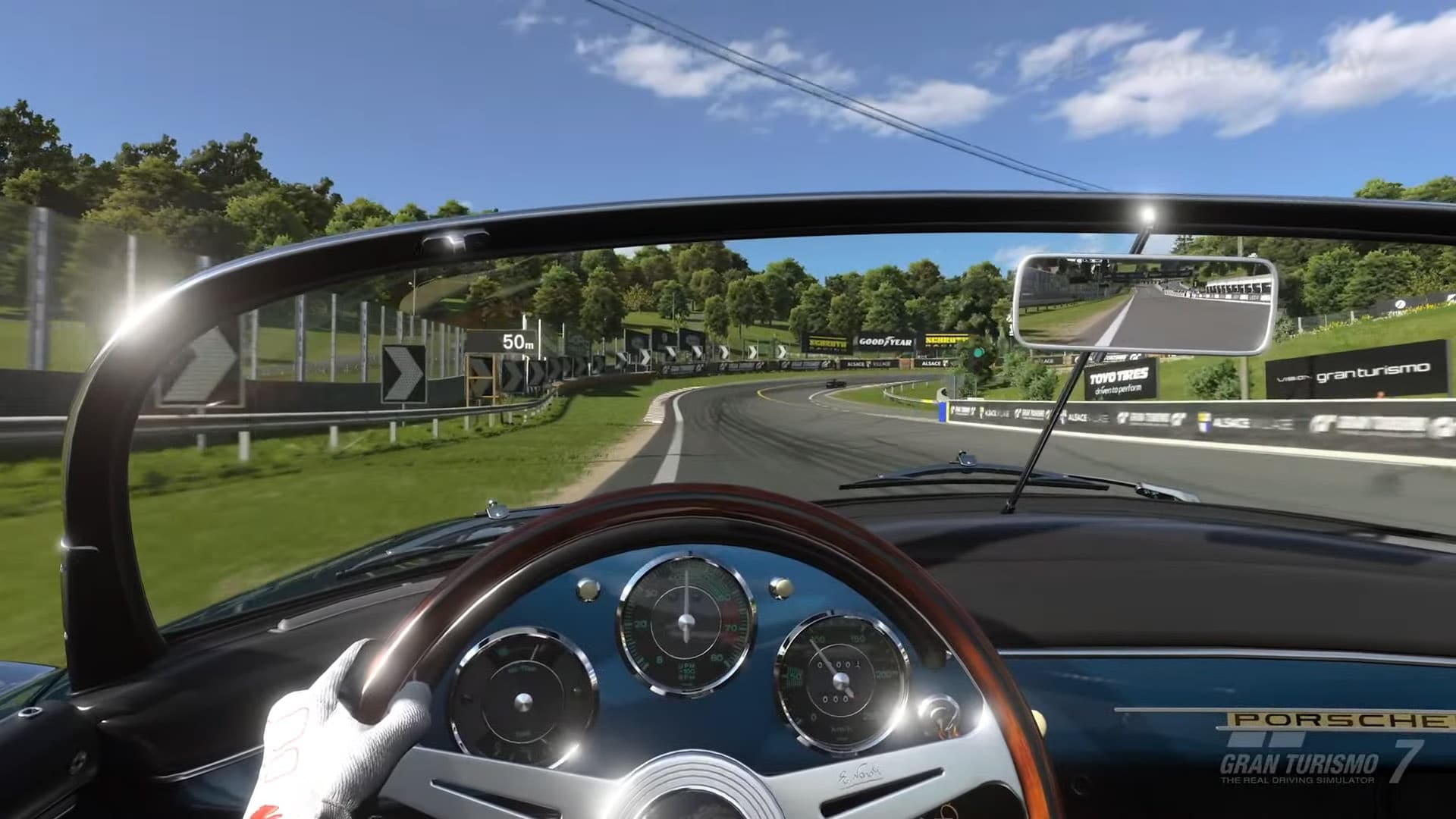 While my history with this franchise began at the beginning, I never became a super fan like some of my friends and peers. I always enjoyed playing Gran Turismo, but I couldn’t play it every day, and didn’t obsess about it as much as others I knew. My love of racing games has always been rooted in the arcade, but I do enjoy a good simulation every once in a while.

I remember the day my friend’s family got the original game, and how in awe we were. Then, going over to a friend from high school’s house and him forcing me to sit down and watch as he played through a two hour-long endurance race. That wasn’t too much fun, for me at least.

When I got my PlayStation 2, it came with Gran Turismo 3. I traded my N64, a few controllers, a couple rumble packs, the expansion pack, some memory cards and around 31 games to pay it off, and got severely ripped off. However, playing the — at that time — newest Gran Turismo on modern technology was once again awe inspiring. Unfortunately, that was the last of my experience with this series until I was sent a review code for Gran Turismo 7 and installed it on our PlayStation 5. That is, despite the fact that I purchased Gran Turismo 5: Prologue when it hit the shelves for PlayStation 3. I was simply playing and renting too many games, and never got to it.

Enough about me, though. Let’s get back to the game now that you know my history, which felt important to mention.

Upon starting Gran Turismo 7, I was dropped into a ‘Music Rally’ race, which is something that is new this time around. Part time trial and part musical experience, these events task the player with driving until the end of a chosen song, without letting the beat timer drop to zero. This is accomplished by following the tempo of the song, as faster songs require faster driving, and going through gates to add time to your counter. 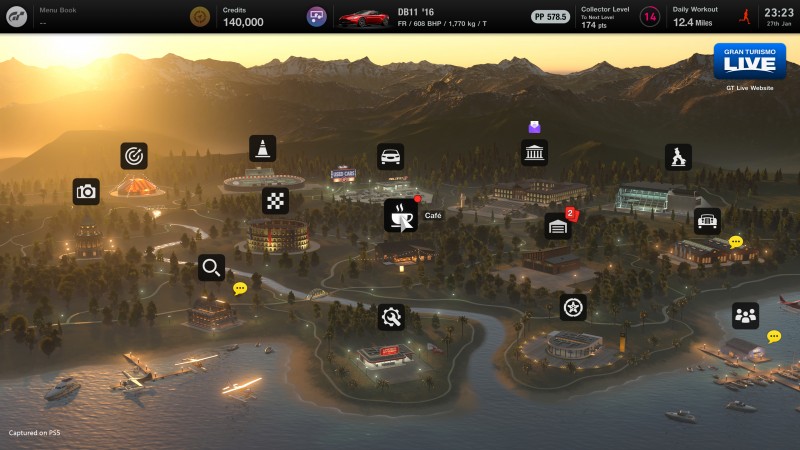 Going into each Music Rally, the difficulty will unsurprisingly pertain to your chosen song and the challenge level you’ve picked, be it beginner, intermediate or expert. On the more difficult settings, assists are lowered and it becomes even more important that one follows the driving line.

Music Rally is a new mode and option within Gran Turismo 7, but it’s obviously not the focus, or the meat of the experience. That comes in the form of a single player career mode that is structured in a very odd and surprising way. This mode encompasses almost the entire world, using the game’s 34 locations and 97 impressive track options, many of which exist in real life.

As expected, you’ll start from the bottom and try to work your way up, but you won’t do it through a regular list of events and disciplines as we continue to see in games like Forza Motorsport 7 and, more recently, GRID Legends. No, Gran Turismo 7 is something different, and honestly a bit weird. It eschews the traditional list of events in favour of a cafe; one of the several different locations you’ll see on the game’s main menu, which takes the form of a coastal town. This map features world circuits (each location, with its currently available events listed), a used car dealership, the license bureau where you’ll complete tutorials and challenges in order to increase your driver level, your garage, the tuning shop, brand central (which requires invitations to buy cars) and other, more advanced car dealerships.

Surprisingly, a lot of the Gran Turismo 7 experience revolves around the aforementioned cafe and its car-obsessed proprietor.

After completing the first Music Rally event, watching a lengthy opening video that chronicles the history of both cars and racing, then being introduced to the world map by a talking head assistant, you’ll be told to venture to the small cafe in the woods. There, you’ll meet Luca, who’s an automobile historian. He will give you what the developer calls ‘Menu Books,’ which set you on your journey in what is the game’s single player campaign. For instance, the first one is all about Japanese compact cars, and will ask you to purchase your first car, then collect two others by winning races. After that, you’ll return to Luca, watch a video that goes into detail regarding that type of car, and then receive your next Menu Book. It will tell you to focus on another type of car, you’ll race those, and so on. 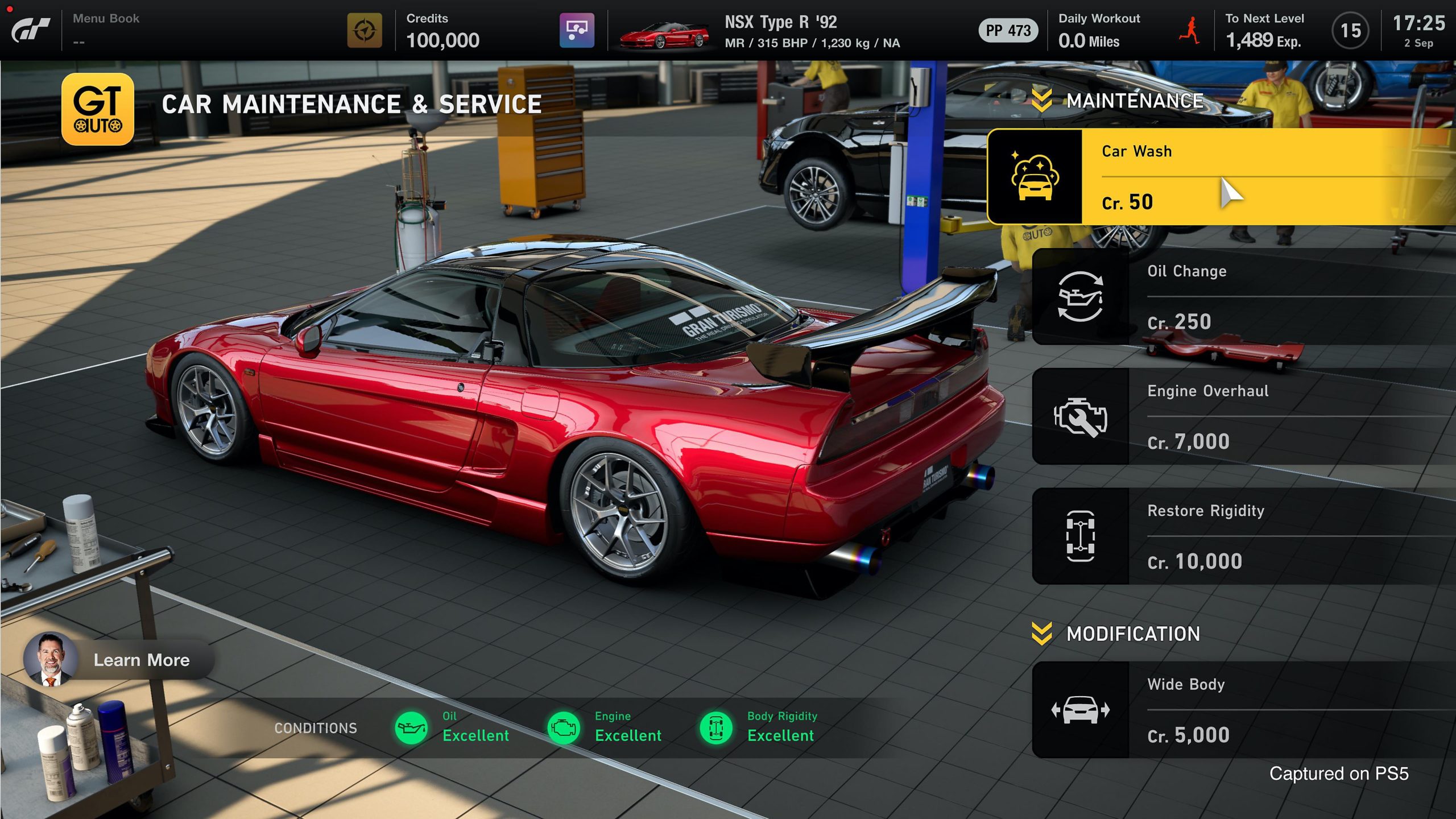 Needless to say, it’s a bit odd and quirky, but it does the trick. It’s just slightly confusing at first. I’m used to a much more streamlined career mode when it comes to simulation or simcade racers. Then again, I hadn’t played a Gran Turismo game in some time.

In addition to the cafe’s progression system, the license centre’s tutorials/challenges and the different car shops, one could also lose hours to Music Rally, photo mode or Sport mode and its preset multiplayer conditions. There’s a lot of gaming to be found within Polyphony Digital’s latest, and it’s not shocking to note that the game features over 400 cars. Fans of photo mode may get the most out of that number, especially if they become invested in the new ‘Scapes’ setting, which allows you to place a chosen car into one of 2500 different spots. You’re essentially placing the vehicle into a particular setting or background, and using that combination to create an image, but it looks really nice.

Of course, none of this would matter if the racing that lays at the heart of Gran Turismo 7 wasn’t well-designed. There’s little to worry about there, though, because it’s very good as it always has been. The PlayStation 5 version, in particular, offers beautiful visuals, ray-tracing and haptic feedback from its special trigger buttons. That said, even without those things, you’re sure to have fun.

Thanks to different difficulties, settings and assists, Gran Turismo 7 can be both relaxing and quite challenging. As someone who’s not particularly great at sims, and is essentially just above average, I didn’t really bother with higher difficulty settings for obvious reasons. They’re there, though. Plus, the level of challenge and engagement also depends on how far you are into career mode, which type of car you’re driving and that kind of thing. That doesn’t even take the online component into account, as that’s a whole new ballpark.

I have to be honest, though: it definitely took me some time to get into this game, after spending so many hours with Forza Horizon 5 and GRID Legends, both of which are more up tempo and action packed but are also different types of racing games. The same could also be said for Forza Motorsport 7, though, as it’s certainly in the same vein and sub-genre as this franchise. Both are simulation games that can also cater to fans of arcade racers, but I honestly feel like Forza has more personality to it. Although Gran Turismo 7 is a really well made racing game, and a fun one at that, it feels more sterile and occasionally lifeless than its competitor, which didn’t allow me to identify with it as much. That said, some people prefer this, as I discovered during a conversation with a friend. I respect that, too. 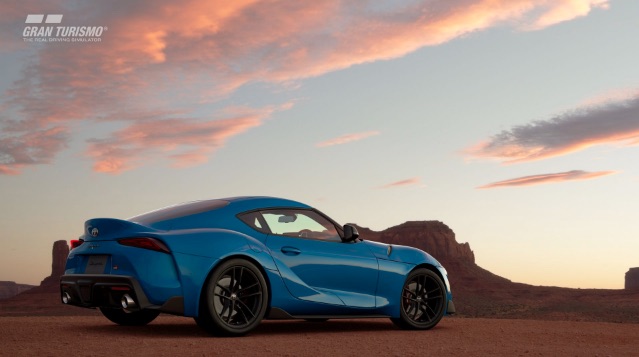 What’s important here is that the driving is fluid, engaging, detailed and immersive, and that this celebration of cars succeeds in being what it wants to be, which it does. The gameplay loop that is created through buying cars, completing menus and winning tokens can be addicting, and it can be easy to push bed off by saying “Just one more race.” It’s also pretty easy to tell which car is the best, because the series’ patented PP points system combines each vehicle’s stats and boils them down into one easy to read number.

That said, there are some drawbacks outside of what I’ve mentioned. For one, most of this game requires you to be online at all times, which won’t be an issue for most but may bother some, especially if said person wants to play during an Internet outage, at the cottage or immediately after moving. Furthermore, Polyphony Digital and Sony, itself, added a microtransactions system to this game following its review period. It’s essentially a cash for credits form of paying to win, and there are four tiers:

I don’t support or recommend this at all, and have never spent a cent on such things. Thankfully, it’s optional and far from mandatory.

At the end of the day, Gran Turismo 7 is what it promises to be. It’s an incredibly detailed, very immersive and lengthy love letter to cars, all wrapped up in an interactive package. While it’s not my favourite racing game ever made, I enjoyed my time with it and thoroughly respect it.

If you’re a fan of this series, and this type of game in general, then it’s definitely worth your time and money.

This review is based on the PlayStation 5 version of the game, which we were provided with by PlayStation Canada.

Gran Turismo 7 Review
Gran Turismo 7 is an interactive love letter to cars, and their history. It succeeds at being both education and fun, but can feel a bit sterile, slow and lifeless at times. The heavy handed history lessons might also bore some folks who just want to race.
Visuals93%
Audio88%
Gameplay86%
Story75%
The Good Stuff
The Not-So-Good Stuff
2022-03-18
84%Overall Score
Reader Rating: (0 Votes)
0%