During the height of their time in the spotlight, Telltale Games released one of their best episodic efforts: Tales From the Borderlands. A different, choice-based take on Gearbox’s loot shooter series, it presented an interesting storyline, likeable characters and gameplay that worked despite being so varied from what we were used to. As such it quickly became one of the most well-liked, or even beloved of the Telltale games and is one of this writer’s personal favourites as well.

When Telltale ran into difficulties near the end of The Walking Dead: A Telltale Series, we didn’t think we would ever see another Tales From the Borderlands game. The writing seemed to be on the wall, and it didn’t look good at all. At least we’d been able to play through the one, though. Then, not too long ago, a surprise leak emerged online. One that referenced the upcoming release of a game called New Tales From the Borderlands. Nothing had been confirmed, or even talked about, at that time, but the box art looked legitimate and actually was.

Fast forward two or three months, I guess, and I’ve now played through New Tales From the Borderlands. Thus, I’m here to share my thoughts, as someone who played through almost all of the Telltale games (except for the crappy Minecraft one) and has absolutely adored Borderlands since the day it first released. I still remember that day fondly, by the way.

Developed by the folks at Gearbox Quebec, New Tales From the Borderlands stars a brand new trio of characters, although a couple familiar faces do make some cameos. Two of these protagonists are adopted siblings, with those being Atlas employee Dr. Anu Dhar and her brother Octavio. The other is a unique and welcomed surprise, being that she’s in a hover chair. Fran, as they call her, is the queen of frozen yogurt, and she’d also Octavio’s employer. She just happens to have a really high libido, plays for both sides and has a rage problem.

Although our story begins in space, where Anu is attempting to create a gun-like device that isn’t a gun at all. Instead of killing those it shoots, it teleports them somewhere unknown. She’s not ready to show it off, but something she does forces her into it before she receives some strong words from murder-loving Atlas CEO, Rhys. After an unexpected boarding by Tediore, she then flees to the planet of Promethea, where her brother — Octavio the failed wanna-be influencer — and Fran both reside. Then Tediore launches another attack, this one aimed at the planet itself.

When Tediore invades Promethea, it brings our trio of protagonists together, but they’re not really sure of what to do. They decide to try to stop Tediore, and to investigate rumours of a vault key, because they’re all pissed off at that weapons company for some reason. Fran is especially angry at their leader, because her parents’ frozen yogurt establishment was partially destroyed by a rogue Tediore laser the last time they attacked Promethea, and insurance has yet to cover or fix the gaping hole in the side of the building. 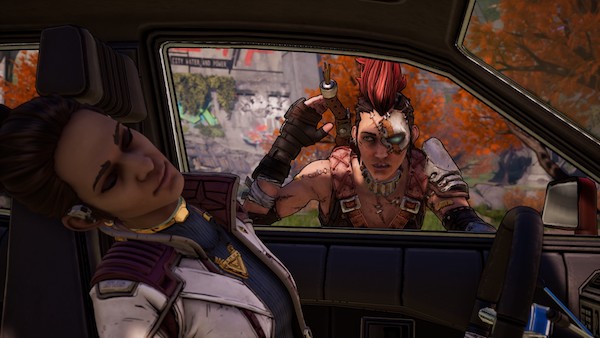 Told over the course of five episodes, all of which are contained within the game and available at launch, New Tales From the Borderlands is another zany and colourful experience with lots of unique characters, quite a bit of comic relief and some homages to things like Ghostbusters thrown into the mix. It’s a valiant attempt at recreating the magic of the first two Borderlands games and Tales From the Borderlands by Telltale, but it fails to achieve the same heights. At the end of the day, it’s merely decent.

As you play through this 8-10 hour long game, you’ll make dialogue choices (and some other types of choices) that will alter the narrative and lead to a relatively unique playthrough. Like those before it, this is a choice driven game, and one where you get quite a few options. That said, I didn’t feel like some of these options were as impactful as they were in previous games of this ilk. One character (let’s just call him Oct) also made a downright stupid decision that was so dumb it took me out of the game. There’s no way anyone would do such a thing.

You’ll also meet an eclectic assortment of secondary characters, as per usual. This includes LOU13; an assassination robot who kills people based on the grievances of others, so long as they set a bounty. He’s pretty much a mainstay, and happens to be a friend of Octavio’s for some reason. LOU13 provides comedic relief, and is joined in the supporting character category by a few others, including a demolitions expert and a female sniper. Then, there’s Stapleface — a bandit — as well as the owner of a taco truck, who happens to be a bit too friendly with ratches. You see, Octavio is obsessed with tacos, much like a lot of the people my age seem to be, though I don’t get it at all.

Since a lot of this is choice based, you’ll find yourself picking a lot of dialogue options, making decisions and trying to quickly match the inputs that appear on screen. Thus, if you’ve played one of these games before then you’ll have a great idea of what to expect. New Tales From the Borderlands doesn’t change things up too much, but it does ask you to press sequences of buttons at times, and has options that are lethal and non-lethal. You can also use money you’ve found or earned to purchase different costumes, some of which include special hairstyles. Each character’s accent colours can also be customized, including the jets on the back of Fran’s chair.

Most of the environments you’ll explore hide secrets, Easter eggs and homages, and one way these appear is in the form of Vaultlanders. Think of them as action figures, because that’s what they are. They just so happen to depict some of Borderlands‘ most well known characters, as well as some newcomers. Finding these has its benefits, too, because you’ll be challenged to Vaultlanders battles throughout the course of the game. There’s a special Tediore soldier who doesn’t wish anyone ill — much like Anu, who wants to end war by making a weapon that doesn’t kill — and just wants to play Vaultlanders. If you find him he will challenge you to battles, but they’re very easy. It’s basically just a simple fighting game where you pick a fighter (each of which has different attack and defense stats) and engage in battles where you press A to attack and then have to swipe left or right to evade incoming attacks from your opponent. I won them all and didn’t get hit once because they were so damned easy.

If you’re interested there’s an achievement or trophy for finding and unlocking all of the Vaultlanders figures, as well as one for using Claptrap’s figure to win one. I never found him, and only found about half of the figures, but I don’t think I want to play through this thing more than once. I did try one or two standalone Vaultlanders battles, though, as the option is available from the main menu.

Before we move on, I should also mention some of the other things found within New Tales From the Borderlands, such as the ability to use Octavio’s wrist-based phone to hack electronic devices through an assortment of minigames. The same device can also be used to scan other characters and perform background checks, which doesn’t serve too much of a purpose but can reveal some surprising information and also leads to an achievement/trophy. Furthermore, Fran can use her chair’s Dr. Octopus arms to freeze and punch those she dislikes, and there are times where you get to decide whether to do that or not. Lastly, there are some fun and miscellaneous segments involving dancing, retro-RPG battling and more.

Of course, there are also multiple endings. That’s to be expected though.

As I mentioned earlier, this is a decent but unspectacular sequel, which isn’t as good as its predecessor. I enjoyed it, and found it easy to play through, but must say that the first few episodes are better than the last couple. Not only are episodes four and five the longest, but they’re also the least interesting and least comical. They drag, and after a while I just wanted them to end. It’s too bad, because the first three were quite a bit better and set up a much more interesting experience than what followed. I was honestly surprised by how quickly I breezed through those episodes, and then came to a realization that this game was as long as I’d heard it was because the last two episodes were overlong.

The main characters are pretty good, and I enjoyed portraying them in interactive fashion. However, I’d be lying if I said that they were great or as good as some of the characters in Borderlands’ past, including those from Tales From the Borderlands. This is a step down in that respect as well. That said, LOU13 is quite a bit of fun, as is TIMME, who’s Rhys’ assistant bot. 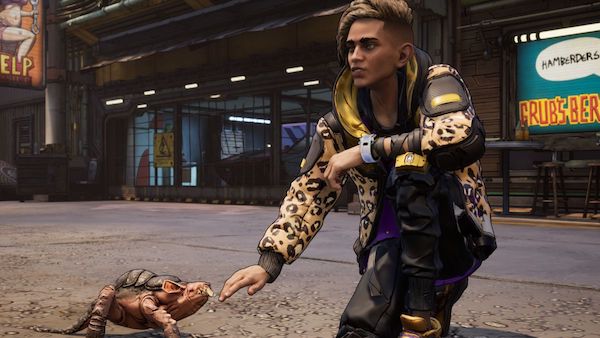 Presentation-wise, this is a quality affair. Although there’s quite a bit of scenery pop-in during scene changes, New Tales From the Borderlands otherwise looks and sounds really good. It’s colourful, it doesn’t take itself too seriously, and it’s got good voice acting, not to mention the colourful sound effects you’d expect from a game set in the Borderlands universe. Each episode also contains one musical scene, where the band and song title are listed in the bottom right-hand corner. I didn’t recognize any of them, but assume they were licensed songs.

When I heard that this sequel was coming, I was admittedly pretty excited and looked forward to playing through it. In the end, although New Tales From the Borderlands failed to live up to my expectations, some of which were based on how good its predecessor was, I still enjoyed it for the most part and am glad that I played/completed it. I’m happy it exists and consider it to be a nice surprise, even though it wasn’t as good as I’d hoped and wasn’t as well written or crafted as what came before it.