Ghost stories tend to tempt and intrigue us because of our collective fascination with death and what comes afterwards. Even though there may be nothing after this, we still want to know and prepare, and perhaps even hope that there is. Sure, they’re written, told and shared to scare, but that’s not the only reason.

In their new, bite-sized, game, Cellar Vault Games has tapped into Malaysian culture, mythology and the spirit realm. The result is a brief experience called Paper Ghost Stories: 7PM, which carries a very apt title.

Paper Ghost Stories: 7PM is a precursor to a larger product, called Third Eye Open, which is expected to release next year. Thus, it’s a short tale and a sort of demo, much like Bright Memory was. It’s about as long as that game was, too, which means it’s 60 minutes in length at most. Hell, I ended up 100%-ing it and probably played for less than an hour. 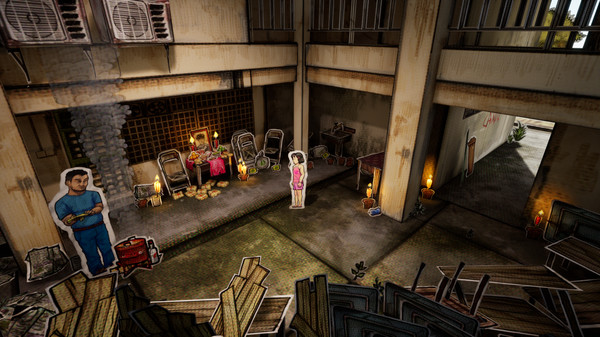 This is the story of three children, who all seem to be siblings, and the apartment complex they reside in somewhere in Malaysia. It begins with an older woman, whom they refer to as Auntie, telling a story about her strange neighbours. You see, a man and a child reside next door, but they haven’t been seen, at least in some time. The only reason people know they’re in there is because strange arguments bleed through the walls and into the apartments nearby.

This tale ends up sparking the kids’ interest, although it isn’t told in full before they set off to play and explore. This gives the player the opportunity to first inhabit the sister, and then the others, in order to progress the story. The end result is a game where you venture throughout the apartment complex, which includes a normal sized courtyard, a parking lot, a common area, a back room and three floors of residences. Well, only two since the third one is blocked off by rubble. You move throughout, talk to different residents and learn about them and their experiences. It’s not a rich experience in terms of variety and gameplay, but it is an interesting, somewhat unique and visceral one. 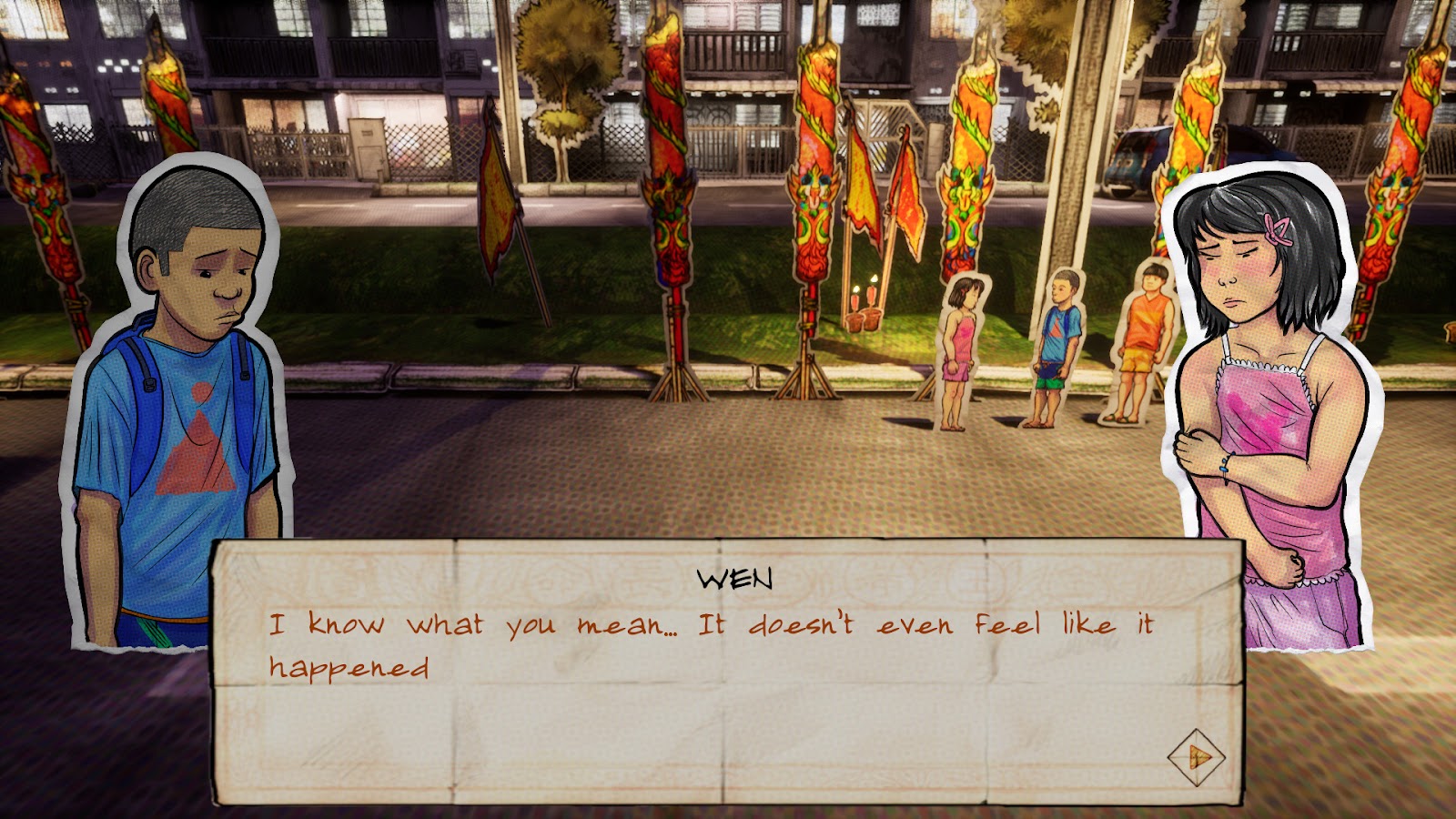 If you decide to only focus on the story you’ll probably be able to get through Paper Ghost Stories: 7PM in around half an hour, but will miss out on random events, side quests and achievements. As you progress, you’ll learn what to do by speaking to the main characters (such as your Auntie and your siblings), and complete minigames as them to progress the story. I don’t mean Mario Party style ones, though; these involve playing rock-paper-scissors, throwing something by pressing A at the right time, or finding hidden pebbles. As you do so, you’ll learn more about the people who reside in that mysterious apartment and attempt to get a glimpse of them.

Saying much more about the story would risk spoiling things, so I’ll stop here. I will, however, add that it’s an interesting tale that piqued my interest despite its brevity. As a fan of ghost stories, horror movies and books, I appreciated what the developers tried to do and think they accomplished it pretty well. That said, this is a very short experience and one that will only appeal to a certain type of gamer. One who’s mature, open to new experiences and doesn’t mind trying something that isn’t fast-paced or action-packed.

Honestly, what stood out the most about Paper Ghost Stories: 7PM was its animation, which I won’t forget anytime soon. To say that it’s unique would be an understatement, as — while it’s somewhat similar to Paper Mario for obvious reasons — it has its own look and style. 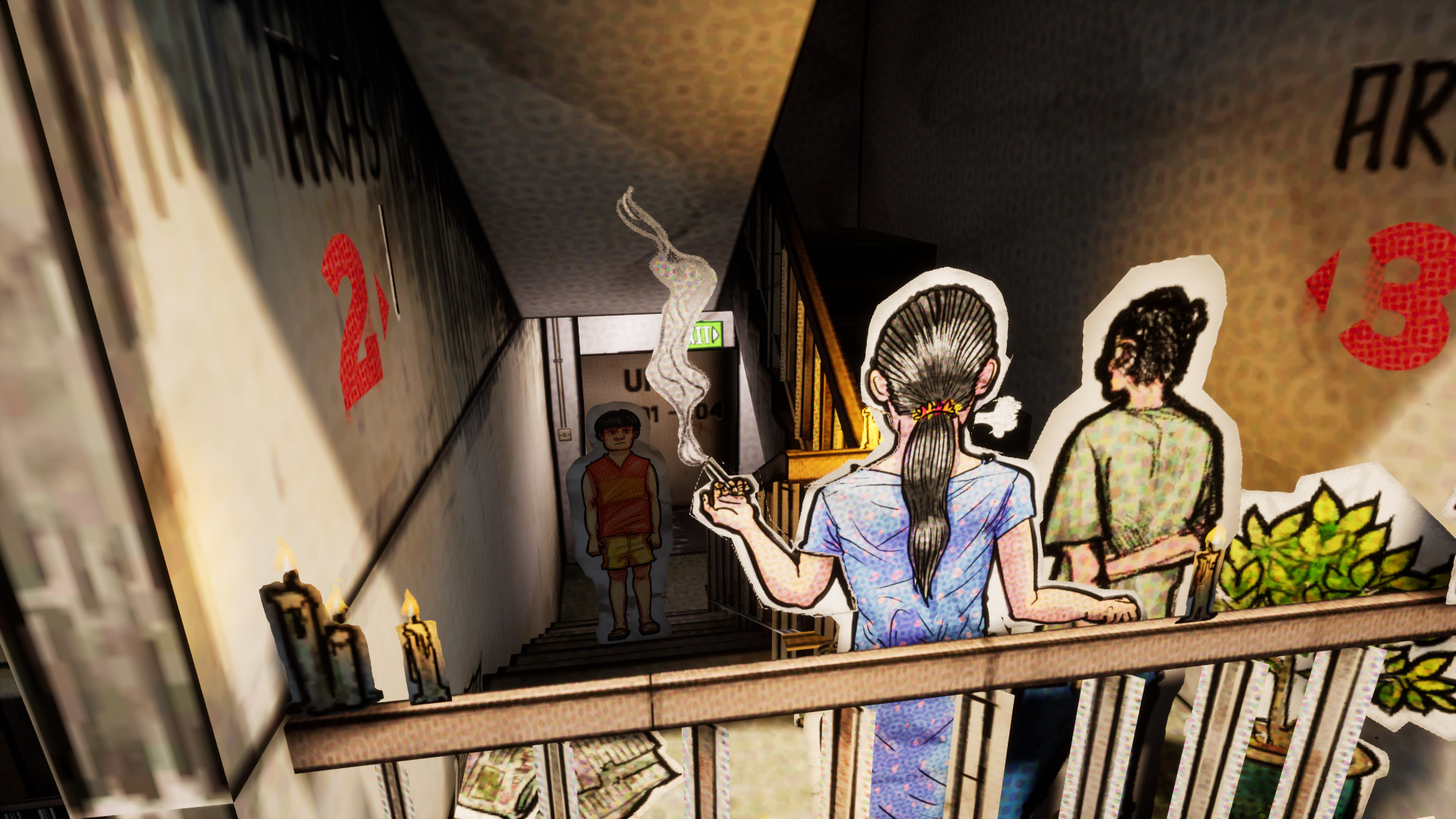 Although they explore a 3D world, all of the characters have been designed as if they’ve been drawn onto a 2D piece of paper. Going further, their models look like they’ve been crafted with pencil crayon, and animated accordingly. Thus, you’ll see a lot of paper flipping (when you turn around or move into a different area), along with some really interesting looking animations. I can’t recall ever having played a game like this, outside of Paper Mario which shares some similarities, and really liked the look of it. That is, even if said design sometimes led to minor control and camera issues.

The audio, on the other hand, is quite eerie and befitting of a ghost story. It’s ambient and atmospheric, but does get pretty loud at times so be warned. That said, it’s mostly just music and sound effects since all of the dialogue is told through text bubbles. Many, many text bubbles, as this is a wordy game.

As said above, Paper Ghost Stories: 7PM is an interesting and somewhat unique experience, but one that is very short in length. It’s also not a game that will interest those who like their games fast-paced or action-packed, as it’s slower and more cerebral. Those who feel it sounds interesting should check it out, though, if they have an extra $5 to spare or can wait for a sale. It’s a pretty neat demo and a promising glimpse at a bigger game that is still to come.