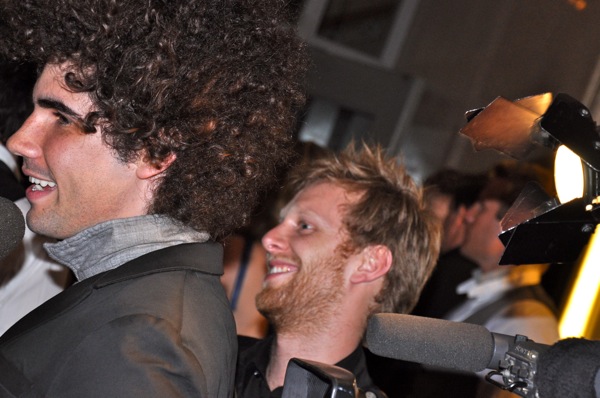 They were devirginized and given two awards to show for it.  The Midway State, a local Toronto band has been making huge headlines in the indie rock and mainstream pop scene in Canada lately, and their new accolades only fuel the fire. The group picked up two Much Music Video Awards last night; Favourite New Artist and Best Independent Video for their debut single Never Again.
I had the chance to chat with Daenen and Nathan for a few minutes and they were stoked about the awards and couldn’t be happier. Check the interview after the break!

Eggplante: Gentlemen!  Your album is still going and you’re still winning awards for it a year after it was released; how did you manage that?

Daenen: This is our first MMVAs, it must’ve missed last year’s deadline.  We’ve got our first few singles out and we’re releasing our new single next week, a collaboration actually, and we’re not done. We’re not ready to go to bed yet.

Eggplante: Nathan, at the last interview [check it out at www.guttersnipenews.com], said that the Junos were the best awards show he’d ever been to.  I’m putting you on the spot.

I popped over to Nathan who was at my other side, who was texting his family (let’s face it, he was Tweeting) at the time.

Eggplante: I was asking Daenen about your album, having been out for about eleven months now, you’re still winning awards for it.  Where did you find the horseshoes?

Nathan: I have no idea! It’s insane!

Nathan: It hurts man, it absolutely kills.  It’s so rad that, I came here tonight and I had no idea about anything, and we’re so lucky that the next step in front of us is so clear; we just make music because we feel like its a good thing to do.

Eggplante: Last time we spoke, we talked about that midway state [not to be confused with the band’s name; the “midway state” I’m referring to is being in a moment of “in between” in one’s life] that you guys felt like you were always in.  Is it safe to say that you’re past that now?

Nathan: You know, I think we’re gonna be in the midway state for a while.  We like it here.

What a way to fantastic way to end a short and sweet interview.

In an interview with Lady GaGa later in the night, she was asked about a collaboration they worked on (likely the one mentioned in the interview) and what she thought of the experience.  “It was really exciting doing that collaboration with them, and I really let Midway State take the lead with it.” With a huge phenomenon like Lady GaGa giving so much credit and control to the band, it is no wonder they have been so successful.

They may not be massive international artists yet, but The Midway State is one to look out for as they continue to dominate Canadian charts and scoop up the accolades.  There’s only so much Canada left; time to start taking over the world.