After months of rumours, it’s finally been confirmed who will be bringing us the latest theme song for the long tradition of 007 movies in this November’s latest offering, Spectre. Despite rumours of artists like Ellie Goulding, or even a return for Adele, who performed the previous theme song for 2012’s Skyfall, it turns out that the franchise’s final choice of singer isn’t who anyone expected. 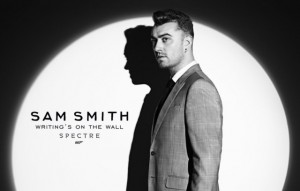 Sam Smith has won the coveted gig of performing the theme song for Spectre, which he co-wrote with fellow Grammy winner, Jimmy Napes. Smith teased his involvement with the song on Twitter yesterday, but now, Sony Pictures and MGM have confirmed Smith’s official signing for the gig. Smith’s song will be titled, “Writing’s on the Wall”, and the song will be available to purchase and stream from Capitol Records, starting on September 25th.

The tradition of specialized 007 movie theme songs began all the way back in 1964, with the release of the third, widely adored 007 movie, Goldfinger, where a song of the same title was performed amidst a lavish intro sequence by Shirley Bassey. The tradition started by Goldfinger has been perpetuated to this day for the movie franchise. Bassey also went on to perform the theme songs for 1971’s Diamonds are Forever and 1979’s Moonraker, both songs with the same title as their respective movies, and appeared again to sing Goldfinger live for the 50th Anniversary of the 007 movies at the 2012 Academy Awards.

Interestingly, virtually all of the 007 movies starring current Bond actor, Daniel Craig have theme songs that differ from their movies’ titles, with Skyfall being the only exception. The only other Bond actor to star in official 007 movies with theme songs that differ from the movie’s title is Roger Moore, namely in the previously mentioned “Nobody Does it Better” and “All Time High”, though “Nobody Does it Better” does include a lyric that declares its movie’s title, The Spy Who Loved Me. 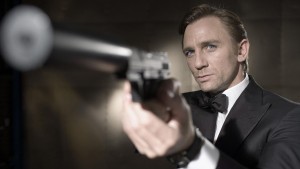 Spectre, which comes to theatres and IMAX on October 26th in its native U.K., and November 6th in North America, brings back Daniel Craig’s incarnation of iconic superspy, James Bond, as he receives a cryptic message at MI6. The message leads him through a trail of conspiracy that takes him back to the darkest reaches of his past, and puts him in the crosshairs of an organization beyond anything he’s ever faced before. Naturally, this organization is SPECTRE (standing for Special Executive for Counter-Intelligence, Terrorism, Revenge and Extortion), who are well-known for being foes of the original 1960’s incarnation of Bond, also being an adaptation of Soviet organization, SMERSH from the original Ian Fleming novels, taken from a Russian portmanteau that roughly translates to, “Death to Spies.”

Keep spying Eggplante for all news and updates on the 007 movies.