The show floor opened at 10 o’clock, and we ran to our first meeting of the day: Ubisoft. We met with Christophe from the Montreal studios (the best studios: can you say Assassin’s Creed and Splinter Cell?) and he took us around to the various stations. We took a look at the ridiculously awesome Your Shape: Fitness Evolved for Microsoft’s newly unveiled Kinect. Accurate to the centimetre (supposedly), Ubisoft tracks something like 128-points on your body to get realtime measurements of your body and tailor the experience to you. Everything seems so well thought out: the menus move with you as you move, knowing even when you’re not standing parallel to the TV, it can tell you the degrees of your arm and leg movements, and knows when your body is positioned properly for certain exercises and stretches. This is probably the first game I could actually see as helping people lose weight and get in shape. It has some very fun activities that don’t rely on the system guessing if you’re swinging a remote in the right direction. You actually have to swing your body in that direction to progress, and beating a game is always a great motivator.

The developer slash publisher also had Just Dance 2 for Wii on display on their main stage. Take some of the year’s biggest hits: Lady GaGa, Ke$ha, and so on, and put them on stage for some motion controlled dancing. Go Ubisoft!

Their next showing was a demo of Ghost Recon. This game also looks incredible. Not as much of a leap as I anticipated, it actually just seems like another take on a futuristic shooter. That isn’t necessarily a bad thing, but we’ve seen these kinds of things before. Ubisoft will of course do something great with the genre and I’m sure they’ve got plenty more tricks up their sleeves. Unfortunately, given Ubisoft’s track record for release dates, while they say March 2011 for this one, expect to see it sometime in 2012. At which point, it won’t be set in the future, but rather the past.

Ubisoft also had Hawx 2 to show off which only main improvement includes take-off and landing, and higher-resolution ground textures and buildings, but beyond that, nothing revolutionary. Hawx was a good game, so if they don’t screw up Hawx 2, it should be decent. But decent isn’t an “I need to have this”, so it wasn’t super thrilling either way.

Insert fanboys crying that I didn’t mention Assassin’s Creed Brotherhood gushing here. What can I say, I’m not a fan. If you liked AC I or II, you’ll like Brotherhood. ‘Nuff said.

Next up was our hands on time with Rock Band 3. Have you played Rock Band 2? Good. Add a keyboard.

In all seriousness, Rock Band 3 is pretty well Rock Band 2 with vocal harmonies from Beatles Rock Band and with a new keyboard attachment. You can get pro drums which adds cymbals, and there is a new song list, but at the core, Rock Band is Rock Band. You’ve played it before, and you’ll play it again.

Nintendo had a very impressive showing this year. This is the first year in a long while where virtually all their franchises have updates, including older ones! Donkey Kong, Kirby, Mario, Zelda, Starfox, PilotWings, and Kid Icarus all made an appearance. The latter five won’t show up until 2011 on the 3DS, but they’ve got a very impressive line-up nonetheless. The power of these franchises can’t be understated, either. With so many classic titles, virtually every gamer on the planet has played one of them, and they make Nintendo’s line-up unbeatable, whether players want a new Zelda title, some Mario Kart, or Donkey Kong or Kirby action. The games that we got our hands on (Zelda and Donkey Kong) were incredible. They just felt like they were supposed to. Skyward Sword was ridiculously impressive, and Donkey Kong Country Returns is simply magical. I first played Country on the Game Boy Color and this game stays true to the great gameplay of the original. Good luck to Microsoft and Sony in competing with the big N!

Speaking of Microsoft, our final booth tour and hands on of the day was with the green giant known as XBOX, and we had a blast. One of my favourite arcade games, Hydro Thunder: Hurricane, is on XBOX Live Arcade and it plays like a dream. A bit too heavy on the controls, but that’s the way the original played, and you can’t mess with a classic. Insane boats, great boosters, power ups, and awesome courses to traverse. Can you say 1000 ft. waterfall?

We rounded up our Microsoft tour with a demo of some other XBLA titles, a quick play through of Kinect, and wound up at the Theatre showing of Halo: Reach. What can I say? This is Halo! The showing started with the same demo as Microsoft’s press conference but quickly became a demo of the new flying system in the game. The HUD looks cool, but not super-Halo. I can’t make any judgements on this one until I get my grubby hands on it, and I’m sure when that happens, I’ll love it, but until then, I’ll continue to be weary. This is our beloved Halo, after all!

That’s pretty well it for Day Two. You know, if you don’t count the fact that we also met the voice of MARIO, Charles Martinet! Check out the video of him saying hi to YOU here! Take a look at the mess of photos below and let us know what you think in the comments! Day Three is coming very soon, with even more photos and video as well! 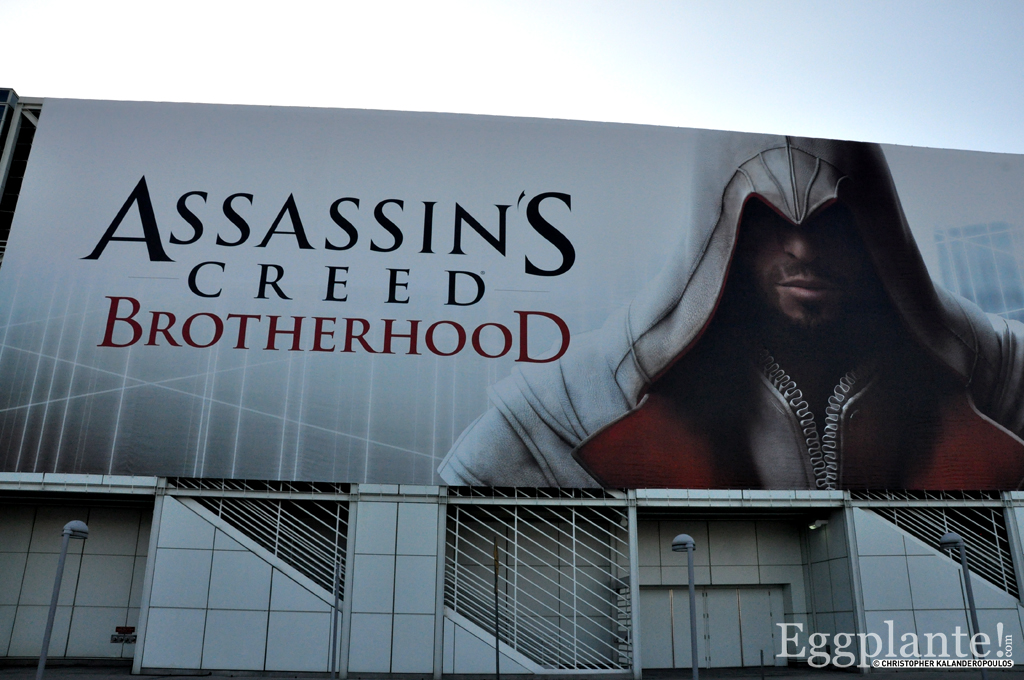