Last month, we posted the first report in a new series titled “What They Do Right”, where every so often, we profile a different company and really let you know what they’re really awesome at doing. This week, we take a look at Microsoft and their talents. Each company of course has their place, and Microsoft is no different. Let’s take a look at what we’ve got:

This one is rather simple, really. Microsoft has the content game pretty much entirely locked down. It is the only company of the three console makers that puts out regular and more importantly, substantial, software updates to their Dashboard. No other console manufacturer has made their console more like a television set-top box, and it doesn’t look like any will in the foreseeable future. Microsoft has really set its XBOX 360 up to thrive and to do it well.

In addition to the way they’ve delivered their content, Microsoft has managed to secure some key content partners and major players in regions all around the world to provide this absolutely amazing content. To list off a few, there’s Rogers On Demand (with Kinect functionality) SkyTV in the UK, Syfy, Muzu.TV, epix, and Dailymotion. Providers of this quality content are not easy to come by, but Microsoft clearly believes that they can get more people to buy their consoles if it isn’t just a game machine. And they seem to be right: they’ve sold almost 70 million consoles.

Now, I know what you’re thinking: “Nintendo has sold way more!”. Sure, but Nintendo has a great foothold all over the world, whereas Microsoft, being the relatively new kid, doesn’t, and the Wii has always been significantly cheaper than the Xbox 360. Either way, they do an incredible job with content, and you can bet that there will be more soon.

The other types of content that Microsoft has been able to pull off include, of course, its titles and exclusives. It’s not easy to forget Halo and Gears of War and Forza because the calibre of these titles is truly phenomenal. We’ve seen each of these three franchises grow from original Xbox classics into modern marvels of technology, audio, graphics, and storytelling. It’s easy to say that every company has their classics and their go-to titles, but for the hardcore gamer, Microsoft clearly wins this race. 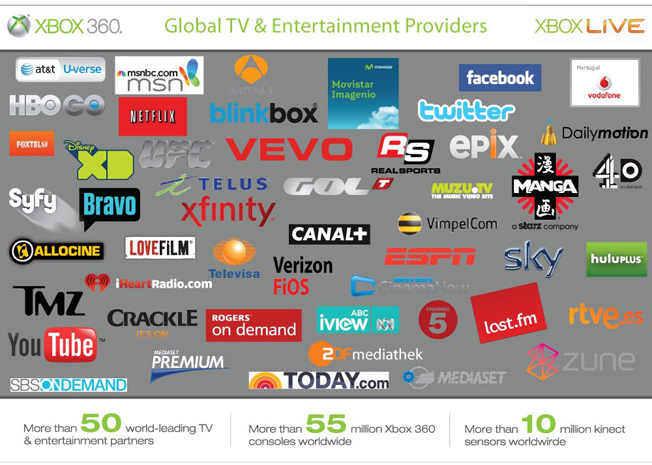 There’s no debate that Nintendo started the motion gaming trend. But when it comes to innovation, companies like Sony with PlayStation Move and even THQ with its uDraw Tablet, have arguably imitated similar technologies from Nintendo’s Wii and Wii U. Of course, they’ve each got their own features, but the inspiration drawn is rather clear. However, Microsoft took their ideas and concepts to the next level and got rid of the controller altogether with Kinect.

Kinect was widely expected to be not only a commercial failure but a technical one as well. Well, Microsoft sold 18 million units and the unit has become the fastest selling gadget of all time. I think it’s a commercial success. Technically, well, Kinect works. It tracks, with great precision, your head, arms, hands, and legs, and can calculate things like your height, predicted weight, and age all with its three camera sensors. And if rumours hold true and Microsoft is working on a higher-resolution, lip-tracking version of Kinect, then we’re all in for an incredible treat.

Also related to meaningful innovation, Microsoft’s other masterpiece, the Xbox 360 itself went through quite a change in 2010. The smaller, quieter, sleeker, and stealthier Xbox 360 Slim was unveiled at E3 that year, and unlike Sony’s incremental PlayStation 3 Slim, the new Xbox 360 packed in new functionality in the form of WiFi, a single cable for data and power for Kinect, as well as the abolishment of the disastrous Red Ring of Death. They also built storage into every model and made the device smaller and quieter. 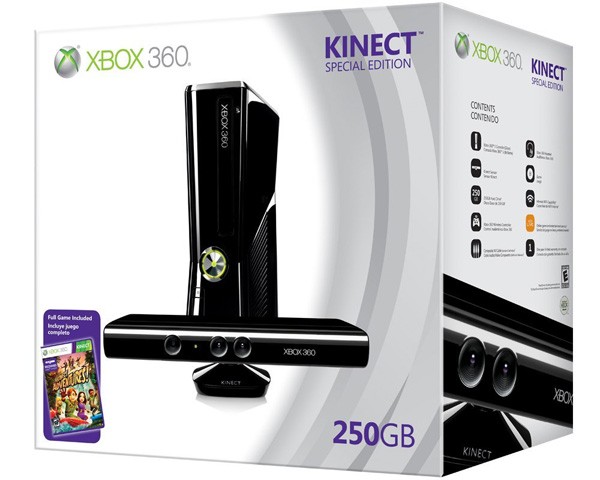 Somehow, Microsoft manages to market to people in a way that is more friendly and realistic than their competition. For Kinect, Microsoft made their main point “You are the controller”, ensuring the customer relies on their knowledge of existing controllers and nothing else as their point of differentiation. However, Sony’s choice was the “Yay, buttons” campaign, that emphasized their Move controller having buttons. We’re not here to debate whose product is actually better, but it seems that Sony’s approach relied on people knowing about Microsoft’s system, meaning the ads likely only appealed to gamers.

Tied right in with their clean and simple marketing efforts are their clean interfaces. Microsoft manages to keep their designs in their user interface absolutely chock full of content but they portray it in a very simple way. The interface is echoed even beyond the Xbox 360 Dashboard and goes right into Windows 8’s Metro interface. The best way to show it off is in pictures:

One can certainly see the similarities

So that’s Microsoft. I’ve got some bones to pick with them, too, but they’re as big as they are for a reason, and there’s no ignoring that.. If Microsoft is poised to announce their next Xbox soon, you better believe everyone will be listening, but they’re also smart enough to not let anyone force their hand. It’ll be great to see just what they do come time for E3 2012.

This isn’t necessarily Microsoft related per se, but take a look at the interesting infographic below. It shows how we have changed in terms of consuming content, and Microsoft seems to be leading the trend for innovation in this space.