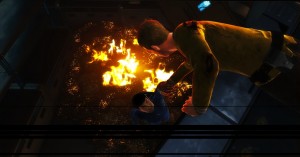 The Star Trek series has weaved in and out of our lives consistently for the last few decades. While we would never consider us super fans compared to the actual Trekkers out there – no, the proper term is not Trekkies – we have always enjoyed the series. The recent J.J. Abrams reboot of the movies have certainly got us more excited about the characters of the original series more than we thought it could, and with a sequel to that film expected next year, a new game is in he works to release alongside it.

Star Trek wasn’t playable at E3 this year, but it was being given a good twenty minute demo by the game’s developers behind theatre doors.

The first thing we noticed about the title was that the game plays out almost exactly like the first – and presumably, second – movie. There was a familiar aura about the game, Kirk with his same swagger, and Spock with his surgically precise theories.

This familiarity does make sense given that the game is voiced by the same major cast as the movie, including Zachary Quinto and Chris Pine. Of course, it is very clear that the game’s artists and writers have also strived to capture Captain Kirk’s cocky attitude and quick wit, respectively.

This entry in the franchise takes place between the original movie and it’s 2013 sequel, mainly set on a planet called New Vulcan. Since the original planet was destroyed in the first movie, Vulcans have colonized a new one and appropriately named it as such. You’re now fighting the Gorn, a familiar lizard-like enemy if you’ve got any previous history with the franchise.

The graphics in Star Trek look decent, if not merely okay. It is an odd looking game, really. Textures pop off the screen and look fantastic. The weaving threads of the crew’s uniforms look incredibly life-life. But the plain white cabin of the Enterprise and boring reds and browns of the planets you explore have no life to them. Character models and faces look fantastic, but characters run in an awkward, uninspired fashion. There are some very intriguing fight sequences, but many moments appear scripted. 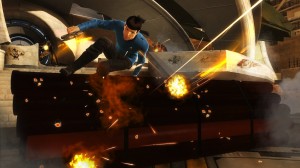 It is clear that this entry in the Star Trek lineage is one of mixed identity. In other examples, audio is good, but not good enough for such a storied franchise.

Unfortunately, while we really wanted to fall in love with the new game, we just couldn’t. The game has some interesting features like co-op play where each player commands either Captain Kirk or Commander Spock and each has their own specialties – combat and analytical, respectively – which could be a meat mechanic if the AI is implemented properly for single-player gaming.

We would really like a developer to take the reigns of theStar Trek franchise and elevate it to a status that would make it worthy of its own game without the need for it to be a movie tie-in. A developer who will craft an original storyline, record new audio assets, and design new weapons and equipment all while still staying within the universe we know and love.