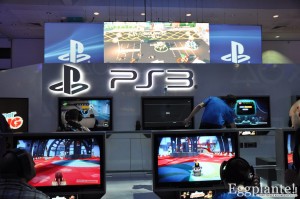 Sony, by our estimation, had one of the busiest booths at E3 even though it seemed like the smallest. Walking through the crowds, there were a ton of games on display with the widest array of hardware, even though they barely talked hardware at their press conference.

Like Nintendo, Sony’s booth was rather uninspired and a simple boxed-in series of game stations and small game rooms. Their upper floor showcased the same games as the lower area, but cut the line and wait time down to nearly nothing for press and special guests.

Their show floor, again like Nintendo’s set up, was broken into sections. Bookending the booth were a series of small rooms that almost mimicked a set of living rooms. They included small chairs and couches for attendees to sit and play some of the games the company was showing off. Things like Wonderbook came to life in these areas and it was great to be able to play these games in a relaxed environment where you could sit down and just enjoy the experience.

In the middle of their booth, Sony planted two massive sets of gaming stations, one for God of War: Ascension and another for PlayStation All-Stars Battle Royale. These areas didn’t usually have huge lines, as there were about sixteen players going through at a time (other companies, please take note as to the efficiency of Sony’s set up!), but they were always busy.

It is worth noting that Sony had a massive Kratos statue next to their God of War area and a huge SackBoy mascot parading through the booth on occasion. SackBoy, in particular, broke up the crowd from being a single mass of people into crowds gathering in certain areas. It helped traffic flow a bit and people of course got their pictures with the star of LittleBigPlanet!

Off to another side of their booth, Sony had a massive amount of Vitas lined up for players to get their hands on. They showed off a few new titles, but also some PSOne Classics, which made us think that they didn’t have enough going on to really justify the display. Of course, they did have about 90% more than Nintendo had in the handheld department, including new titles like LittleBigPlanet Vita, among many others. 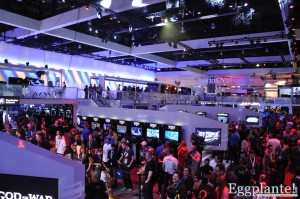 Overall, Sony’s booth was very simple, but it got the job done. No one is going to win any awards for best booth design from the big three gaming companies, but we kind of like the fact that the focus was on the games (and free cookies in the media area) than it was the architecture of a structure that only existed for 72 hours.