Most collector’s editions for major game releases come with a few bonus goodies, some downloadable content, and one piece of awesome swag you must have if you’re a fan of the game. Well, Square Enix seems to be following in this tradition with their upcoming title, Tomb Raider.

For us, the must have item is actually the case the game comes in: a survival tin labelled with the ship that does Lara in at the beginning of the game.

Inside the tin, you’ll also get an 8-inch figurine depicting Lara readying her bow. In a unique twist, you get another three sets of hands for the figurine to have her hold either her shotgun, pistol, or ice axe. Square Enix was very smart when going about how to make the Lara Croft figurine not just another figurine we got with a collector’s edition game. Well done. 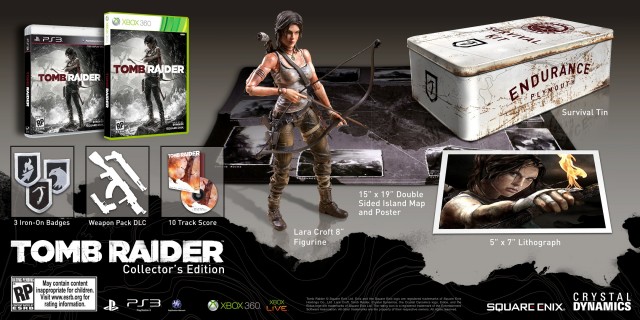 It would probably be helpful if Lara had a map of the island she is shipwrecked on, but alas, how can she when you have it? You get a double-sided island map and poster with key landmarks. The poster is a generous 15″ x 19″, but unless the tin you get it in is humongous, it’ll be folded, meaning it’ll be unframeable.

In addition, you’ll get a lithographic print of Lara on heavy-stock with a matte frame, as well as three iron-on badges depicting three of the game’s experience icons: “Animal Instincts, “Climbing Axe”, and “Fire Arrow”, all of which make the game sound twelve degrees more awesome than before we read them.

In addition to a bunch of weapon-based downloadable content, you can also expect a soundtrack from the game complete with ten tracks and over an hour of music from the game.

The biggest things we look for in collector’s editions is some sort of audio compilation and something truly unique to the game we’re playing. Of course, not every game can have something awesome (we’re still a bit disappointed at the Halo 4 Limited Edition), but Square Enix hits all the right marks with this collection for Tomb Raider.