We may be a bit late to the Forza Horizon party, but that’s because this game is so awesome and we’ve been playing a ton of it. Okay, we’ve actually just been playing a lot of Halo 4, but that doesn’t mean that Horizon isn’t an awesome game.

Let’s start from the beginning: Forza Horizon is (obviously) an Xbox 360 exclusive and is developed by a company called Playground Games. This is a company with some of the best-of-the-best in racing game design and development. The Playground team is made up of a bunch of ex-Criterion, ex-Bizarre Creations, and ex-Codemasters employees. Therefore, the bar is high to create an equally best-of-the-best racer. Surprisingly (or perhaps not), Horizon delivers.

Racing games typically aren’t our thing. We love story, and racing games just don’t have it. But something about Horizon drew us in, and we actually found a bit of a story here.

Forza Horizon isn’t a typical racer where you go from a menu screen into a race, and vice versa. This is actually an open-world game where you need to drive from race to race in a massive sprawling land. Most of the land is pretty barren – it isn’t an open-world game in the same way Grand Theft Auto is – but it is all rendered in stunning fashion.

The presentation of Horizon is beautiful. It could easily rank as the best racer we’ve seen (better than Gran Turismo 5, yes), with some of the most detailed presentation elements we’ve seen. It takes the detail of Forza Motorsport 4 and dumbs it down to beautiful bare essentials. Light passes through fences and between individual leaves on trees in the fall, and the night scenes have an incredible visceral reality about them. They’re not spooky dark, but rather calm, as you might feel when you’re camping and there’s a warm fire next to you.

Gameplay is tightly woven, but the developers have made a few missteps in our opinion. The name Horizon actually refers to the Horizon Racing Festival in the game. You compete in the festival to work your way up from Fiesta-driving novice to Aston Martin-drifting James Bond. Street races between the main Horizon races earn you some money to soup up your rides, but can be a bit tricky to enter.

The problem with the gameplay is actually not the controls or the driving at all. Rather, the game becomes remarkably unforgiving when you’re drifting through corners or trying to speed away from other cars. Your combo meter will fill up very quickly, but the slightest tap on a fence – or worse, an opponent who hits you – will dash any hopes of collecting those points. It’s a minor gripe, but it becomes a big frustration when we’re stringing together massive combos only to be bumper tapped by some dude driving a Chevy Volt. And no, there is no Chevy Volt in Horizon, let’s get serious here.

It’s a bit hard to make little quibbles when you end up in the middle of the game racing against a plane. Yes, a plane. There are moments in the game where the absurd becomes reality and you end up racing past checkpoints against actual flying aircraft. No, it’s not the most realistic thing in the world, but damn if it isn’t fun. 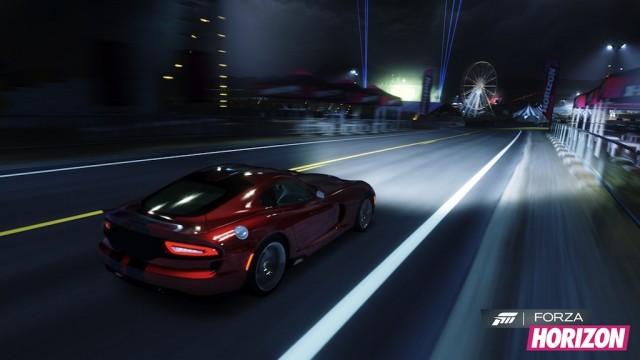 Audio is another thing that is maintained with Horizon. The game sounds as excellent as you would expect, with true-to-life sounds for cars, and impeccably recorded audio.

With the Forza name in the market for years, the developers of the game have repeatedly spoken about the feel of games in the series as having a certain Forza DNA of sorts. We’re happy to report that, while a completely different style of game (save for the actual racing part), Horizon is remarkably identical to Forza Motorsport 4 and retains the physics engine and underlying structure in vehicle mechanics that made the previous entry in the series handle so well.

One of the coolest features that still blows us away is how the development team manages to shoehorn so much content into such a small package (the small package being the relatively small DVD disc of an Xbox 360). Playground still manages to include rewind in the game, in the middle of a beautifully-rendered desert, with a day and night cycle going on in the background, while other cars are driving by. At sixty frames per second. The entire time.

Perhaps one other minor gripe we have is the advertisements used in the game. With the small, indie feel of the Horizon Festival, we feel just a bit pulled out of the experience when we see banners for brands like Bose plastered in the game. With that said, there are some brands that make the cut that are probably a bit closer in price and age demographic – brands like Adidas, for example – which help to pull us back in.

Overall, Forza Horizon is a joy. It doesn’t make sense that a game can look this good, have such incredible lighting and shadow effects, a complete day-night cycle system, tons of cars, a massive open-world (based on Colorado, by the way), and still run as smoothly and cleanly as it does. Horizon isn’t only the best racing game we’ve played this year, it’s the best racing game we’ve played. Period.