There has been a ton of talk about The Phantom Pain, the game revealed first revealed at Spike’s Video Game Awards this past Friday that showed an awfully Big Boss-like character awaking from a coma to see some pretty incredible hallucinations: flaming unicorns and fiery whales, anyone?

Where most teasers or bizarre viral campaigns have one or two hints to their true identities, The Phantom Pain has more than a half dozen tidbits of info pointing to Metal Gear Solid V, so we thought we’d recount them for you here. First, take a look at the trailer for the game here, then follow along below. 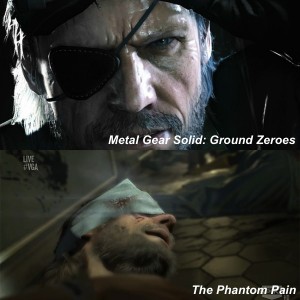 1) The Phantom Pain trailer starts out with someone who can only be described as Big Boss from the MGS series, and ends with a close-up of his very familiar face. He’s also got a bandage wrapped around his head which covers his right eye, just like the eyepatch he wears in the series. This is pretty definitive, but the clues get even more obvious as we go along.

2) The game is supposedly being designed by a firm called Moby Dick Studio, whose CEO is supposedly a man named Joakim Mogren. First off, Moby Dick Studio’s acronym is MDS, which is very close to MGS for Metal Gear Solid. Second, Joakim is an anagram of Kojima, the series’ creator, while Mogrem contains the word ogre. Kojima has said that the code name for the next Metal Gear Solid game is Project Ogre. A few too many coincidences here to discount, we think.

4) The Phantom Pain‘s logo has some interesting marks and notches in some letters. Some intrepid users have found that, using the same font, the title “METAL GEAR SOLID V” fits perfectly into said notches. This is probably the way to confirm everything else is true.

5) “From FOX, two phantoms were born.” This was a line on the teaser image for Metal Gear Solid: Ground Zeroes. The game is running in the FOX Engine, and while Ground Zeroes will be the first game to benefit from the new (gorgeous) engine, it is clear that the second phantom is The Phantom Pai… uhh, Metal Gear Solid V.

There are people in the VIP section of the Konami party wearing Phantom Pain/Moby Dick Studios t-shirts.

There’s a slight chance that The Phantom Pain is a real game and is being developed by Kojima Productions or another studio, and it just also happened to be used as an announcement trailer for Metal Gear Solid V, however we think that is highly unlikely. The footage in the game is very bizarre and we’re not exactly sure how it’ll play out in the MGS universe, but we’d love to see a magical game with overly-fantastical elements like those flaming whales swallowing helicopters. Really, who wouldn’t, though?

We’ll make sure to keep you in the loop when The Phantom Pain is finally announced to be Metal Gear Solid V and the best way for you to keep up-to-date is to follow us on Facebook and Twitter. We’re also holding a contest right now, so check that out, too!